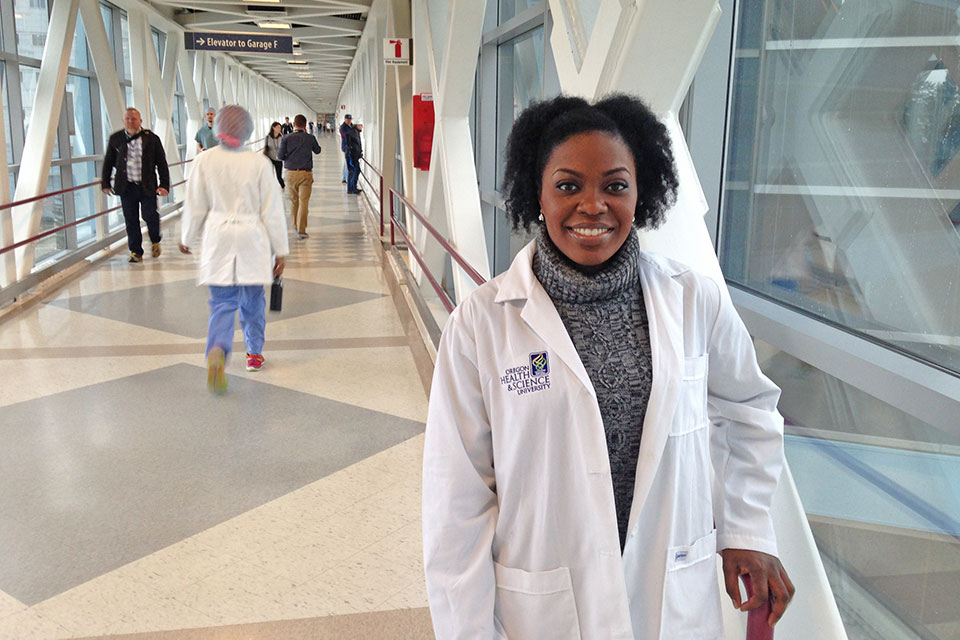 This June, Ann Oluloro, a medical student at Oregon Health & Sciences University, will say goodbye to her native Portland and embark on the next crucial step to becoming a doctor.

For the next several years, Oluloro will be completing her graduate medical training in obstetrics and gynecology as a resident of the University of Buffalo.

It’s a long way from home, but the city in upstate New York was among her top three choices for potential residencies.

“They say to choose a program based on your gut instinct,” said Oluloro, in an interview with The Skanner. “I just loved the residents at Buffalo.”

Her relocation to the chilly city was the culmination of Match Day, likely the most significant moment in any medical student’s life. Every March, graduating students are “matched” with residencies through the National Resident Matching Program, using a Nobel Prize-winning algorithm.

“Match Day is almost like the NBA of NFL draft,” said Oluloro. “It’s a huge deal, and probably more important than graduation.”

Unfortunately, there are more medical students than residencies, so not everyone will place in their discipline. Given that Oluloro “matched” is no surprise to anyone who is familiar with her intensely-focused efforts and achievements.

At 28, she’s had little time to be a care-free twentysomething, joking that her spare time consists of sleeping. Her love of medicine and her drive to improve public health care surfaced at a young age. When Oluloro was still in preschool, she got a toy stethoscope and doctor’s kit for Christmas.

“I remember I was playing one day and I said, ‘Mommy, I’m going to be a doctor.’ So I knew very early on,” she said.

For most of her life, Oluloro has been carving out her path to professional medicine. Born and raised in Portland, she graduated from Madison High School and completed several of what she calls “pipeline programs,” including OHSU’s Summer Equity Research Program.

She attended the University of Oregon, where she earned a double major in biochemistry and biology, and a minor in business administration. She also ran the university’s Intercultural Mentoring Program, which helps increase the retention rate of minority students.

Oluloro’s change-making seeds, however, were planted long before her formal education began.

Her family made headlines in the 1990s when her Nigerian-born parents were divorced, leaving Oluloro’s mother as an undocumented worker in the U.S. Faced with deportation, Lydia Oluloro set a precedent for other asylum seekers when she claimed that her American-born daughters – Ann and her sister Shade, ages  5 and 6 at the time – would face genital mutilation by relatives in Nigeria if they returned.

Lydia, who won the case, is herself a victim of female circumcision. Her fierce determination to challenge the ritual, and stand up for gender equality, has been an inspiration for her daughter.

“From that point on, I thought, why are women treated differently in society?” said Oluloro. “It made me want to look at women’s rights and go into that aspect of medicine.”

“Also, with my mom being a single parent and us not having a lot of money, we always went to the free clinic,” she continued. “Seeing the disparities between people who could afford healthcare and us, who couldn’t, made me want to do something about that.”

Oluloro came to OHSU in 2012. And while she’s grateful for having had the privileged opportunity to study medicine at the institute, she admits her five years were not without periods of isolation.

“When I first entered OHSU I was the only African American medical student in my year,” she said. “I will never forget the first day of lecture… I was sitting in the third row and I looked around, thinking, ‘Oh my God, I’m the only Black person.’”

Oluloro eventually found her mentors, including Dr. Charles Thomas, one of the few African American men to chair of a radiation department in the nation; as well as Dr. Alisha Moreland-Capuia, the first African American board certified psychiatrist in Oregon.

“Being at a predominately White institution, you do run into institutional racism. It’s subtle but it’s there,” said Oluloro. “I’ve always been career-focused, because I feel especially as an African American student you have to work twice as hard just to get to the level of your White counterparts.”

According to OHSU, the MD program’s entering class in 2016 had six students who identified as African American or Black on their admissions application – the highest number since 2008. In 2010 and 2009 there were no Black students; most years there were between one and three. Spokesperson Tracy Brawley notes the application questionnaire does not include students who identified as two or more races. The school’s first African American graduate, Walter C. Reynolds, MD, graduated in 1949.

In addition to her degree in medicine, Oluloro tacked on a Masters of Public Health. She joined the Student National Medical Association, assisted in recruiting events for high school students, and participated in Health Care Equity Week at OHSU, which hosts seminars on health disparities in Oregon.

“Being able to address disparities, and being able to increase the number of diverse, underrepresented minority students in medicine has been my hallmark here.” She told The Skanner that OHSU has already seen an uptick, since her first year, in the enrollment of medical students from minority communities.

June 4 marks graduation day, and Oluloro will be settling into her new home just weeks later. She said Buffalo is an ideal match for reasons beyond medicine, including its affordability (which means she can cut her debt as soon as possible) and its proximity to her sister, who lives in Canada.

Lydia Oluloro, also a health care professional, will follow her daughter up north. Oluloro’s goal has always been to retire her mother as soon as she landed her first real job in medicine. After all, she said, her mom worked so hard to get her where she is today.