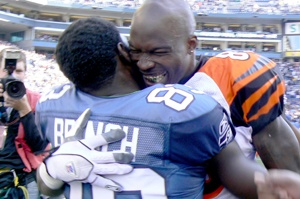 Seahawks Wide receiver Deion Branch and Oregon State alumni and Cincinnati Bengals wide receiver Chad Johnson exchange a hug after the game in which Seattle prevailed with a 24-21 victory. Branch completed a 42-yard touchdown in the second quarter.

It was a nail-biter at the end. Trailing 21-17 with a little over two minutes left in the game, the Seahawks scored on a 22-yard touchdown pass, and during the ensuing kickoff return, with less than one minute left, forced and recovered a fumble, sealing the win.
In a wild game, the Seattle Seahawks beat the Cincinnati Bengals 24-21 Sunday afternoon in front of 68,110 screaming fans at Qwest Field. After the Hasselbeck/Alexander devastating hand-off loss last week at Arizona, the Seahawks found a way to bounce back for a much-needed win over the Bengals.
The Seahawks secondary kept the Bengals offense off-balance with Deion Grant and Brian Russell each having an interception, proving the Seahawks made the right choices when signing the safeties in free agency. Grant had nine tackles and his interception preserved the Seahawks victory after Bengals wide receiver Glenn Holt was hit hard by linebacker Lance Laury and running back Alvin Pearman caused the ball to pop out and land in Grant's hands.
"I love the challenge," Grant said. "It's one of the reason's I wanted to come to Seattle and this just shows if you stay mentally focused throughout the game and do your job, you'll come out with a win."
"Special teams started the game with a big play and ended the game with a big play," Coach Mike Holmgren said. "That's what you need from your special teams, so it was a total team effort."
Linebacker Leroy Hill forced a fumble in the second quarter meant for Bengals wide receiver T.J. Houshmandzadeh that was recovered by cornerback Kelly Jennings.
"It felt good to be back," Hill said after missing last week's game with a sprained foot. "I just wanted to show everyone I was back," Hill said after finished the game with seven tackles and a quarterback hurry. "We stopped them, applied pressure and kept them out of the endzone and I have faith in our offense that we'd get the job done."
Cornerback Marcus Trufant kept tight coverage on All-Pro Bengals receiver Chad Johnson, who led the NFL in receiving yards entering the game and finished with nine receptions for 138 yards but without scoring a single touchdown.
Special teams made big plays in the game with two long kickoff returns, including the explosive start of rookie Josh Wilson returning the opening kickoff 72 yards. Three plays later, Matt Hasselbeck connected with receiver Bobby Engram for an 18-yard touchdown pass putting the Hawks on the board only 90 seconds into the game.
"Every phase of our football team contributed. Our best football is still ahead there's no doubt we will continue to work hard and get better and improve our running game, Holmgren said.
The Seahawks 12th man contributed to three false start offensive penalties against the Bengals for a total of 10 penalties for 72 yards. "Probably the loudest place I have ever played," said Bengals quarterback Carson Palmer who completed 27 of 43 passes for 342 yards. Palmer completed only one touchdown and was intercepted twice.
Running back Shaun Alexander, still playing with the cast on his left wrist, rushed for 100 yards on 21 carries but after the game discovered he has a small crack in the wrist he sprained in the home opener against Tampa Bay. Holmgren said Alexander will continue to play despite the crack in his wrist.
Hasselbeck also completed a 42-yard touchdown pass to Deion Branch in the second quarter and the 22-yard game-winning touchdown pass to Nate Burleson. Burleson caught six passes for 76 yards, Branch caught six passes for 77 yards and Engram had five for 62 yards. Hasselbeck finished the game completing 24 of 37 passes for 248 yards.
Holmgren said that they still have work to do on running the ball consistently and knows there's room for improvement.
"I wasn't particularly happy with how we ran the ball," Holmgren said. "We ran it a little bit at the end of the game and got some yards. But early on, we weren't too successful."
The Seahawks are 2-1 and tied for the lead in the NFC West with the division rivals San Francisco 49ers going into this week's game in San Francisco.