Wanted: Justice for All

By The Skanner News
Published: 26 September 2007 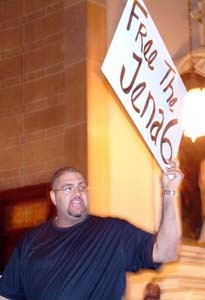 Ian Heisser, the president of Phi Beta Sigma Fraternity, Inc., Epsilon Epsilon Sigma Chapter, holds a sign up and chants "Free the Jena Six" at a Prayer Vigil of Support and Justice for the Members of the Jena Six on Sept. 20th at Immaculate Conception Catholic Church. The vigil which was sponsored by Phi Beta Sigma Fraternity and the Knights of Peter Claver Inc. Council #218, and it included remarks by James Bible, the president of the Seattle Chapter of the NAACP. The vigil coincided with a march in the town of Jena, La. by thousands of supporters for six Black teenagers who supporters say have been the victims of overzealous prosecution for the assault on a White teenager.