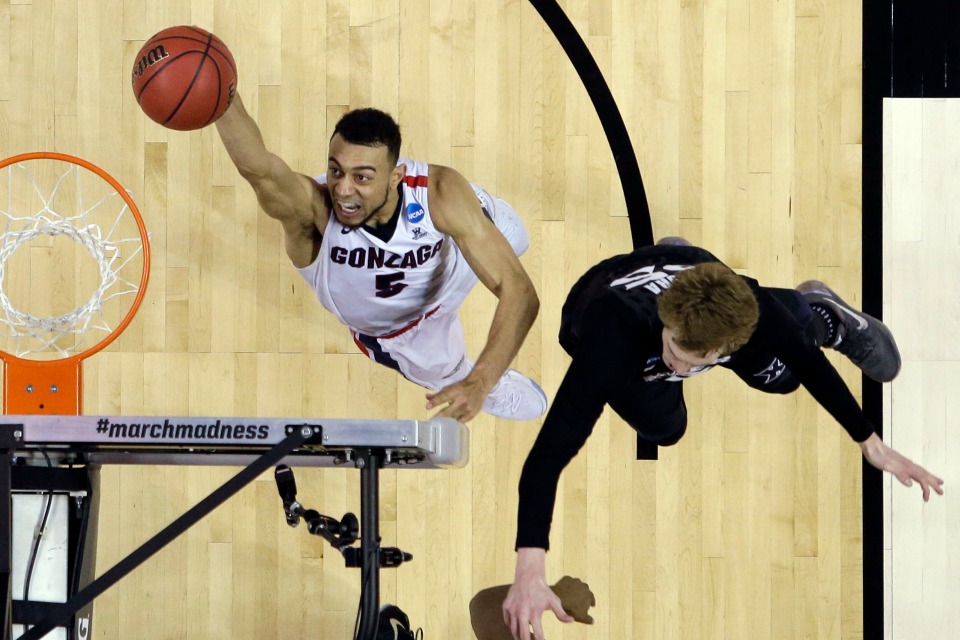 PHOENIX (AP) — Consider North Carolina the tour guide at this year's Final Four. The Tar Heels will be making their record 20th trip, and most of the players on this year's roster were on hand last season to find out all about the agony of coming oh-so close to winning it all.

For the rest of the guests, it's all uncharted territory.

South Carolina's entire history in the NCAA Tournament could've been compiled on a cocktail napkin.

And Oregon? Well, the Ducks have been to the tournament before and won it all. But that was back in 1939, the first year of the event, and decades before the phrase "Final Four" became as common as "dribble," ''pass," or "shoot."

"It's been a long time coming," said Oregon coach Dana Altman, the 10th man to hold that job since Howard Hobson, who doubled as the school's baseball coach, led the title team called the Tall Firs eight decades ago. "Now we just need to go and continue to play well."

Gonzaga opened as a 6 1/2-point favorite against South Carolina in the opening game next Saturday night at University of Phoenix Stadium in Glendale, Arizona. According to ESPN Stats & Info, it's the first meeting between Final Four first-timers since 1973. In the second game, North Carolina opened as a 4 1/2-point pick over Oregon.

For South Carolina — coached by the equal-parts angry and effervescent Frank Martin — being an underdog at this point is a good thing. It means there's still a chance, which is something Gamecocks basketball never really had before Martin arrived. Before this season, South Carolina hadn't posted a win in the NCAA Tournament since 1973.

"Personally, I didn't know where this program could go," Gamecocks sophomore P.J. Dozier said after his team's 77-70 win over Florida. "But I know that when Frank Martin stepped foot on campus, you just got this vibe that the ball was rolling."

It's been rolling at Gonzaga since Mark Few took over in 1999. Problem is, there was seemingly always a bigger team from a bigger conference standing in the way of that program — from a campus of 7,400 in Spokane, Washington — taking the final step. Last year, the Bulldogs lost a 3-point heartbreaker to Syracuse in the Sweet 16. Seeded second the year before, Gonzaga couldn't hang with No. 1 Duke and lost by 14 in the Elite Eight.

"I've been there 28 years," Few said, counting his first nine seasons as an assistant. "My first year on staff we won four Division I games. And, I mean, this wasn't even possible. And each year we got better and better, and then we got really, really good."

North Carolina has been good for decades, and has more than enough history to make up for the other teams. Luke Maye made the winning jumper with 0.3 seconds left for a 75-73 victory over Kentucky. This will be the Tar Heels' fifth trip to the Final Four under the guidance of coach Roy Williams, and their second straight.

They have spent the last year seeing their nightmare finish to the 2016 tournament replayed on an endless loop of highlight shows and March Madness videos. Villanova's Kris Jenkins hit a shot at the buzzer in the title game, only seconds after Tar Heels guard Marcus Paige made a double-clutch 3 to tie it.

"I just think about it all the time," said Joel Berry II, one of three current Tar Heels who were on the floor when Jenkins hit the game-winning shot. "Four seconds made a difference in my life. I wish I could get those 4 seconds back, but I can't."

The No. 10 seed Oregon women's basketball team will look to continue its string of upsets in the NCAA Tournament as the Ducks meet UConn -- No. 1 ranked and No. 1 seed -- on Monday night in the Elite Eight.