A Call for Justice

By The Skanner News
Published: 26 September 2007 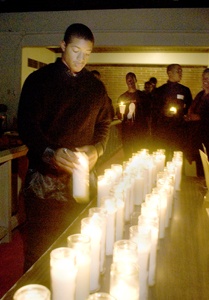 Events in the small town of Jena, La. may have sparked a new passion for civil rights and justice in America. But it wasn't just Jena. It was 50 bullets aimed at a car full of Blacks in New York; it was Genarlow Wilson, jailed as a teen for having consensual sex with a girlfriend; and it was a Black girl getting seven years for pushing a teacher's aide in Texas. For many African Americans and civil libertarians of all races, these cases — and many others that never made the headlines — seem to define a justice system that is anything but just.
On Sept. 20, tens of thousands of people of all races descended on Jena to express their support for six teens who many say have experienced an overzealous and racist prosecution. The protest in Jena coincided with other protests around the country, and in Portland, several hundred supporters gathered at the Bethel African Methodist Episcopal Church to a hold a candle light vigil and peace walk in support of the teens.
"It's disappointing to know people waste their time to give unjust punishments for children who shouldn't be in that position in the first place," said Zachary Wilson, 16, a member of the Prospective Gents, the group that organized Thursday's vigil. The Prospective Gents, part of Portland Bridge Builders, is a club for high school students that encourages community service, high aspirations and the promotion of positive African American values.
Clad in black dress, Jena 6 supporters – young and old alike — were resolute in their feeling that the events in Louisiana are unjust and should not be tolerated.
"The Jena 6 are people our age," said Gents Vice President Mulu Habtemariam, 17. "And they're being tried as adults."
The Jena 6 – Robert Bailey Jr., Mychal Bell, Carwin Jones, Bryant Purvis, Theo Shaw and Jesse Ray Beard – are accused of attacking a White classmate, Justin Barker, 17. Barker suffered a head injury, bruises and a swollen eye in the assault yet he was released from the hospital hours later and attended a high school ring ceremony that night. With the exception of Beard, who was 14 at the time of the attack, the five teens were all charged with attempted murder. Charges for four of the teens have been reduced, and Bell is the only one to be convicted. Bell's aggravated battery conviction was overturned at appeal, however. The court ruled he should not be tried as an adult for battery charges. Prosecutors are expected to appeal.
At the Portland rally, Moses Davis, a teacher at Benson High School, said cases such as this "reinforce the mistrust" between teenagers and the justice system.
"It's the same struggle that's been going on a long time," he said.
As an educator, Davis said he was saddened to learn that school leaders in Jena didn't take the opportunity to have a real discussion about racial tensions at the school and in the town.
"It would have made a new day," he said.
Addressing the crowd at the vigil, Portland NAACP President Charlene McGee said the events should serve as a wake up call.
"The case serves as a reminder of the school to prison pipeline," she said.
She lauded the Gents for standing up against injustice in the justice system and encouraged others to become more engaged.
"For those who believe racism no longer exists," she said. "(Let this serve as) a glum reminder."
Although the in-your-face racism of the deep south might not exist in Portland, said Alejandro Queral, the director of the Northwest Constitutional Rights Center, actions in Jena remind us of the battle against racial profiling and unequal treatment here at home.
"We need more effective policies to prevent escalation (that causes violence)," he said.
While Queral said the protests in Jena and around the country could mark a turning point in the modern-day fight for justice, he is skeptical that it will have a lasting impression.
"We have an event or tragedy, we rally together, protest and get pumped up, then we go home (and forget about it)."
For the Jena case to create a lasting impression upon the justice system, permanent legislative changes need to be made to prevent something similar from happening in the future, he said.
Queral's group is trying to work with the Portland Police Bureau as well as the Portland Police Association to address racial profiling in Portland. He would like to see members of the community and officers discuss the sensitive issues surrounding race.
"Let's put the police and the community at the same level," he said. "The police can take off their badges and the community can take off their resentment."
As in the events that led up to violence in Jena, Queral says attitude can go a long way toward calming a potentially explosive scenario. He said police should approach people of color as assets to the community, not potential criminals. Conversely, the community has a responsibility to wait until an investigation is complete before pointing fingers.
"But unless investigations are assuredly non-biased (they won't matter to the community)," he said.
Showing support for her fellow teens at the protest, 17-year-old Jazmine Bowles said the Jena case has made her more cynical of unbiased justice.
"It makes it harder to trust the justice system," she said. "Sometimes I feel sheltered here in Oregon. Man, this is 2007, why is this still going on?"
The Gents raised about $1,500 during the vigil to assist the legal fund for the Jena 6.

The assault that led to the Jena 6 charges was part of a sequence of events of escalating violence. The following timeline is based on information from the Associated Press and the Jena Times.

August 30 2006: At a Jena High school assembly a Black student jokingly asked the principal whether blacks could sit under a shade tree that was a frequent gathering place for whites. The principal said Black students could sit wherever they wanted.
August 31: Students arriving early at school find two hangman's nooses hanging from the "White tree." Three White students were held responsible. The school principal recommended expulsion, but an expulsion committee, calling the incident a "prank" changed the penalty to suspension. Police agencies investigated but found the incident did not qualify as a "hate crime.
September 1, 2006: Black students congregated peacefully under the tree as a protest. School administrators say they were unaware of the protest.
September 5: Black students and parents met in a church to discuss the noose incident. Local television stations covered the meeting.
September 6: Racial tension at the school was high. School officials called an assembly at the school, where District Attorney Reed Walters, told students, "I can end your lives with the stroke of a pen." Black students said the DA directed his comments to them, an allegation he has denied.
September 7: Police maintained a presence in the high school. A scheduled football game was cancelled.
September 8: The school received a gun threat and was in lock down mode for three hours. More than 15 students do not attend school that Friday.
November 30: Jena High School is set ablaze by an arson attack. Ninety-eight firefighters spend seven hours putting out multiple fires. Nobody has been charged in the crime.
December 1: Robert Bailey Jr. is among a group of Black teens who tried to gain admittance to a mostly-White party. Bailey says White partygoers assaulted him. Police make one arrest– a 22 year-old White – but report other altercations.
December 2: Bailey and two friends, Ryan Simmons and Theo Shaw, meet Matt Windham in a convenience store. Bailey identifies Windham as one of the partygoers in the previous night's incident. Windham drew a shotgun, which Bailey, Simmons and Shaw wrested from him. Police arrested Bailey, Simmons and Shaw, and charged them with theft.
December 4: At the high school, Justin Barker reportedly bragged about beating Bailey at the party. The six teens now known as the Jena 6 beat Barker. Mychal Bell, 16, allegedly struck Barker first, knocking him to the ground. The others, Carwin Jones, Bryant Purvis, Theo Shaw, Robert Bailey and Jesse Beard, allegedly joined in kicking Barker. Witness accounts vary as to how many of the teens actively joined the attack. Barker suffered injuries to his head and his eye was swollen shut. He was treated at an emergency room and released. He attended a ring ceremony later that evening.
Initially prosecutors charged the teens with second-degree battery and conspiracy to commit second-degree battery. Later these were raised to attempted murder. Mychal Bell, 16 at the time of the attack was charged as an adult. Beard, 14 at the time of the attack, was charged with juvenile offences. The others were 17, adults under Louisiana law.
June 25-28, 2007: Bell was the first to be tried. The charges were reduced to aggravated second-degree battery and conspiracy to commit second-degree battery. An all-White jury convicted him. Later the charges were thrown out by an appeals court, which ruled he should not have been charged as an adult. In court prosecutors said Bell has previous convictions for assault and was on probation at the time of the assault.