Gardner to Hang Up Her Hat 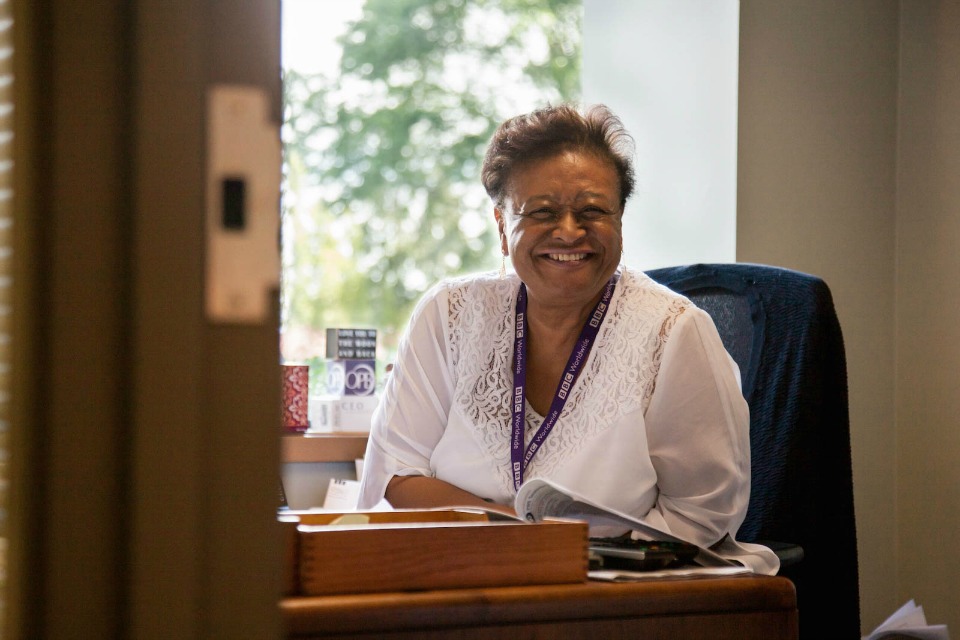 Growing up, she was fascinated by television and movies, and loved “the illusion” of the TV medium. When her youngest child was three, she started attending Los Angeles City College to study directing. “But I have done no directing,” she said. “I’ve run the camera a few times during pledge.”

Gardner has worked at Oregon Public Broadcasting since 1984, and has served as its programming director since 2008. Programmers have a different role than others in television, often working alone, but serve the critical role of deciding which programs to air and invest in. (Local stations can get some programs without paying any more than their dues to the Public Broadcasting System, but have to pay for others.)

Mary Gardner, her husband and their three children moved to Oregon in 1980 “on pure faith.”

Gardner was born in Texas, lived in the Washington, D.C. area until she was 10 and then moved to Los Angeles, where she attended junior high and high school, met her husband and started her family.

Gardner retires at the end of March. Originally, she’d planned to leave her post at the end of December, but stayed on as the station has struggled to replace her – and continues to search.

Gardner started her television career at KGW in 1980. She was hired to fill in the breaks between programs, and her first job at OPB was to compile the “record list” – a list of programs scheduled to be recorded in the near future.

“At previous jobs, I’d learn everything there was to learn and then I’d be bored,” Gardner said. After a short time at OPB, she thought, “I’m in trouble,” and started seeking out other tasks and opportunities to learn and grow.

Gardner thinks of herself as a curator of the station’s television programming – researching new shows from PBS and the British Broadcasting Corporation and deciding what the station will move with in the coming months.

That affords her the chance to get a sneak peek at upcoming programming and develop a sense of what audiences will respond to.

“Television is changing. We all know that. People have DVRs that didn’t exist even 10 years ago. People can watch new shows on their iPhones,” Gardner said. “Downton Abbey,” the period drama that aired on the BBC and became a surprise hit with U.S. audiences after PBS picked it up a year later, developed a following in part due to word of mouth and social media buzz. But in order for that to happen, Gardner said, someone had to make the call to make the show available to audiences in the first place.

The downside of the job: dealing with the fallout from unpopular decisions. “The Lawrence Welk Show” ran from 1955 to 1971 on ABC, but its reruns were a staple on many public television stations throughout the country, including OPB -- until 2010, when Mary pulled the musical variety show from the station’s schedule.

The move wasn’t popular with all audiences, and the station got negative feedback for weeks, Gardner said. But she also said she routinely encounters people, including senior citizens – who make up the show’s putative audience – who thank her for making that call.

“I think a lot of people think 70- or 80-year olds just want to sit in a rocking chair. I’ve found, especially in Oregon, a lot don’t want to do that,” Gardner said.

Oregon’s seniors are more active than senior’s elsewhere, and OPB’s television audience is younger: 55, compared to the national average of 65, according to Gardner.

She attributes that to Oregon’s culture and the fact that Portland’s largest employers are engaged in technology and scientific research.

“We’ve got really wonderful audiences who tend to be abnormally interested in the world around them,” Bass told The Skanner. “I think a lesser person wouldn’t be able to take advantage of that in the way she has.”

Gardner spoke with The Skanner just days before President Trump released a proposed budget calling to eliminate funding for the Corporation for Public Broadcasting, raising questions about the survival of public broadcasting in general and OPB in particular.

According to Bass, OPB receives 8 to 9 percent of its funding from CPB coffers, with the rest coming from member contributions and private underwriting. That puts it in a better place than other local stations, which may draw as much as 30 percent of funding from the federal government – and many of those are in rural areas. But CPB does provide startup funds for some local programs, like OPB’s “EarthFix,” which is now self-sustaining, he said.

Bass is cautiously optimistic about the current budget, noting Pres. George W. Bush called for the elimination of CPB funding in numerous budgets, and it was always restored by Congress in time for the vote. He added public media has champions among Congressional representatives in both parties.

Gardner received the programmer of the year award from the Public Television Programmers’ Association in 2014, and in the past the organization has also awarded her its Golden Grid Award for “creative programming strategies, which grew her audience on OPB,” according to Kristen Kuebler, a spokesperson for the organization.

Kuebler shared the text of the award with The Skanner. It commends Gardner for a list of contributions to her station and the broader public television community, including, “bringing her station’s content into the digital era with style and authority, so that Oregon Public Broadcasting’s prime time is up 33 percent this year on the main channel and up 11 percent on the second channel. In spite of system declines, whole week is up 11 percent on the main and 8 percent on the second and [cumultative ratings] are up on all channels.”

The text also mentions Gardner’s ability to ensure her informed opinion is heard within the broader public television community “without ever shouting.”

“In my experience in public media, a lot of the people who ran programming were flashy or showboaty and wanted a lot of attention coming their way,” Bass said. Gardner, on the other hand, has “just quietly done a really good job.”

Gardner and her husband have lived in Aloha the entire time they’ve been in Oregon, and her three grown children – two of whom attended college elsewhere but have come back – all currently live in the area. A frequent traveler as a member of the PTPA board and convention speaker, Gardner said she and her husband are planning some “bucket list” traveling, starting with a road trip across Canada.

She is considering doing some consulting work for other public television stations in her retirement, and plans to make herself available to guide her successor at OPB.

“I just love this job and it isn’t something I can walk away from,” Gardner said.