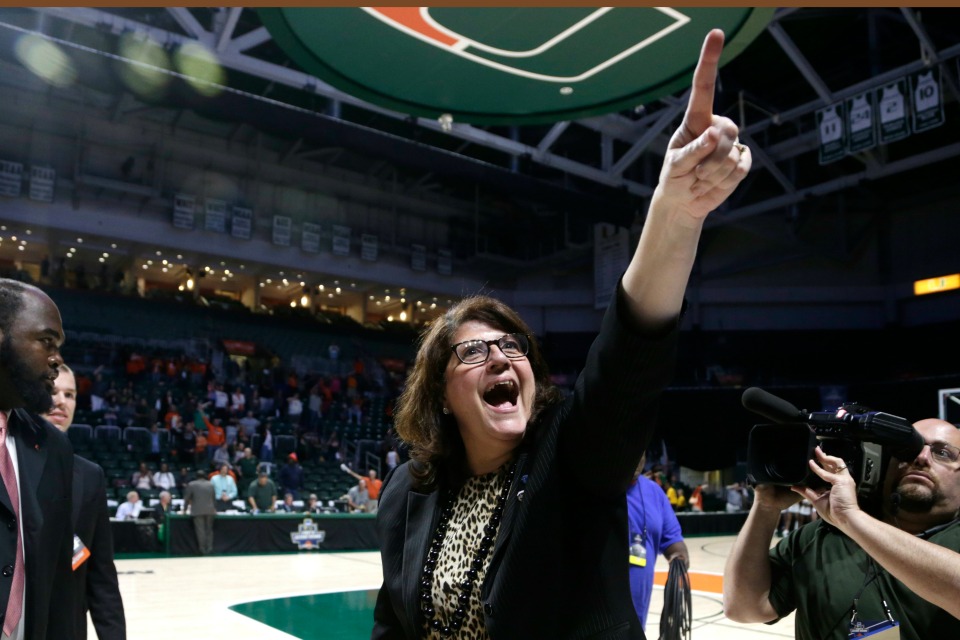 NEW YORK (AP) — Oregon and Quinnipiac are crashing the Sweet 16.

The two double-digit seeds joined a field of mostly top seeds in the women's regional semifinals that will be played next weekend.

It's no shock that No. 1s UConn, Baylor, South Carolina and Notre Dame made it out of the first weekend. Seeing these two newcomers, though, brings an unexpected buzz to the tournament.

It's only the third time in NCAA Tournament history that two double-digit seeds made the regional semifinals.

"It's funny, we never really put a goal on how far we can go, just because we didn't know what we had," No. 10 seed Oregon coach Kelly Graves said after his team beat Duke. "We've kind of attacked the entire season as a work in progress.

"With a young team, you kind of have to do that. House money, that's a good way to put it," he added. "We're playing with house money."

The 12th-seeded Bobcats shocked the field, first beating Marquette and then knocking off host Miami on Monday night. Quinnipiac's run comes 10 years after fellow Metro Atlantic Athletic Conference school Marist made a run to the Sweet 16.

Next up for Quinnipiac is South Carolina. The Gamecocks barely escaped the second round with a win over Arizona State, and the team may be without guard Allisha Gray, who injured her knee Sunday. South Carolina is already missing Alaina Coates, a star center who injured her ankle before the NCAA Tournament began and will miss the rest of the season.

Notre Dame will also be without one of its stars, as Brianna Turner injured her knee in an overtime victory against Purdue on Sunday. The Irish announced Tuesday that Turner tore the ACL in her left knee and will miss the rest of the season.

While both Notre Dame and South Carolina struggled to win, UConn and Baylor both cruised through their first two rounds.

The Lady Bears followed up a record-setting performance in the opener with a solid 40-point win over Cal.

Now the Huskies, who have won 109 consecutive games, will make the 90-minute trip from campus to Bridgeport, Connecticut, for a matchup with UCLA.

Here are a few other things to watch in the regional semifinals:

EXCITING REMATCH: The faces are different — only two players remain from the game — but Louisville and Baylor will meet again in the regional semifinal in Oklahoma City. The two teams played there in 2013 and the Cardinals pulled off one of the greatest upsets in tournament history, taking down Brittney Griner and the top-seeded Lady Bears.

STAR POWER: There are plenty of big-name players still around. The two Kelseys — Plum and Mitchell — will try and guide Washington and Ohio State further. There's a lot of young talent, too, with Maryland freshman Destiny Slocum and Oregon first-year Sabrina Ionescu squaring off. Slocum had the shot of the tournament with a 70-footer just before the half against West Virginia on Sunday.

FREQUENT FLYERS: Stanford, Quinnipiac and Oregon will have spent a lot of time in the air by the end of this week. Not that any of those teams are complaining because they are still playing.

The Cardinal couldn't host opening round games because of a gymnastics tournament on campus so were shipped to Kansas. They will have to fly back to Lexington, Kentucky, for the Sweet 16 after returning home Monday night.

Quinnipiac got out of the frozen Northeast for a trip to Miami. After returning home, the Bobcats will head across the country to Stockton, California. Oregon flew from the Pacific Northwest to North Carolina. The Ducks had a charter flight home late Monday night so that some of the players could take exams at 8 a.m. Tuesday. The Ducks will then fly to Connecticut later in the week.

PAC-12 SUCCESS: The Pac-12 has made claim to being the best conference all season long and it's tough to argue with five of their teams in the Sweet 16. Oregon was joined by Stanford, Oregon State, Washington and UCLA.