Candidates for PPS Board Debate at Black Voices Candidate’s Forum 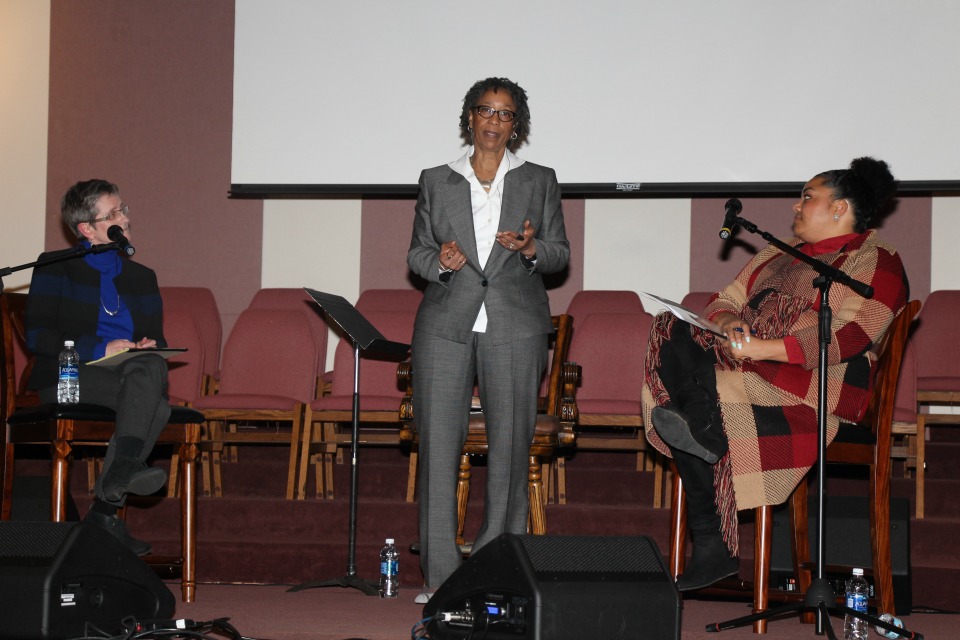 Portland Public Schools will undergo stark changes to its board May 16 when three of its seven seats will be filled with fresh members. None of the board’s incumbents have plans to run again.

While Steve Buel has retracted his bid for reelection of Zone 4, which presides primarily over North Portland, two female candidates have risen to the challenge: educator Jamila Singleton Munson and Portland Public Schools activist Rita Moore.

Both women took to the stage on Monday evening at Maranatha Church in Northeast Portland to participate in Black Voices Candidate's Forum, co-sponsored by the NAACP, the Portland African American Leadership Forum, and the Albina Ministerial Alliance and others.

The public event, which pulled around 60 community members, was put forward by Nichole Watson, a fifth grade teacher at Jason Lee Elementary School and instructor through Black Parent Initiative, a nonprofit that empowers African American parents to engage on campuses that serve their children.

“As a third-year teacher, there is still much I need to learn about the politics of public education,” Watson told The Skanner. “In a discussion with parents I realized, yet again, the Black voice was missing.”

In fact, back in 2013, only 17 percent of Portland’s entire population voted in the PPS board election.

To help correct that poor level of engagement, Watson initiated the debate to inform and embolden local organizations that impact and serve the Black community, along with the families and parents that dwell within it.

“Many parents and teachers, including me, are unaware of exactly how much power the members of the school board hold,” Watson continued, “and that we do indeed get an opportunity to vote for those who hold those positions.”

While Moore – former university professor and current policy analyst for the Oregon Health Authority – has spent 15 years in the trenches of PPS as a parent, activist and advocate, Munson is a former teacher and principle and is also the co-founder of Community for Equity PDX, a local group of community leaders focused on social justice.

Munson has raised some eyebrows over her previous employment with KIPP – the nation’s largest network of charter schools – as well as her current position as the senior managing director of Teach for America, a nonprofit that places recent college graduate teachers into low-income schools. The organization has stirred controversy for replacing experienced teachers with low-salaried, hastily trained employees.

During the public debate, the candidates went head-to-head on a myriad of questions concerning the responsibilities of board members, the role of charter schools, how to address equity, poverty and special needs students, and culturally responsive programming.

Munson stressed the importance of having more people of color in elected office, especially in education. “When I look at our current representation, it doesn’t always look like us,” she said, addressing the largely Black crowd.

According to a 2016 Oregon Educator Equity Report, while 43 percent of the PPS student body is people of color, less than half, at 18 percent, are teachers of color.

Munson is also advocating for “courageous conservations” training for all PPS teachers and firmly recommends a system of report cards to better understand, and thereby improve, performance and policy at each school.

Moore, on the otherhand, returned to themes of misspent budgets and the board’s continual failure to implement proposed solutions. “The superintendent typically decides the budget, which is then rubber-stamped by the board,” said Moore, disapprovingly. “We need much more budget transparency.  The board must decide the budget.”

Days before the Forum, The Skanner asked both women its own questions, which they answered by email. Some responses have been edited and condensed.

The state is faced with a looming $1.7 billion deficit, which means budgets must be spent wisely. What, in your opinion, are the top funding priorities for Portland Public Schools? How does reducing alarming levels of lead in the water factor into that spending?

Jamila Singleton Munson: I am glad to see the district going forward with a bond to address lead and other public health problems in our school. Our educators and students deserve a safe learning environment and the district must make that a priority. We also need to focus on protecting what is working at PPS, protecting programs that are raising the graduation rate and cutting achievement gaps. That means protecting and prioritizing professional development, mentoring and support for teachers and administrators. I also think we need to make it a priority to expand community partnerships so we can better leverage additional support from local partners.

Rita Moore: As great a problem as the lead levels are, the revelations regarding their presence are symptomatic of larger issues at PPS regarding transparency, chain of command, and the deferral of maintenance which was caused by similar budget cuts in the first place. Clearly, deferral is no longer an option. Action must be taken immediately to address health and safety concerns in our schools--a hazard to adults and students alike. If the 2017 bond is passed, many of these issues can be addressed.

In the absence of additional revenue streams, we need to put our money into efficiently fixing problems that arise, so we don't have to solve the same problem multiple times. Money should go to keeping our staff and providing the best quality programs for kids, and every spare minute our board members have should be spent advocating for school funding, and convincing members of the community to step up and do more until we are properly funded.

What are your thoughts on charter schools and the privatization of certain aspects of public schools, as we’re seeing on a national level? Do we need to be concerned with the influence of privatization on a local level?

Jamila Singleton Munson: I have worked in both public and charter schools, helping provide me with critical perspective on charter schools, and how hard it is to open a public charter and sustain change for the long-term. I believe that our charter schools need direct public oversight and must be accountable for the same outcomes as public schools. I also think as long as we have scarce resources for public schools, we must be conservative in opening additional public charters in the coming years. I stand against vouchers, and any national policy that depletes any additional resources from our public schools. As a product of the public school system, I want to keep our schools public and I am against any efforts to privatize this system.

Rita Moore: I am deeply concerned about the national movement toward the privatization of public goods, particularly public education, over the last 20 years. And with the arrival of the Trump administration, we are likely to experience unprecedented pressure to accept corporate privatization. I think it’s important to make a distinction between charter schools that are non-profit and develop organically to meet a need as opposed to for-profit, corporate charters. We have a number of examples of local, non-profit charters (e.g., SEI, NAYA, Kairos) that have been doing excellent work with students who have been historically underserved or failed by PPS. What we have seen, however, is that the rise of the charter school movement has been very closely correlated with a dramatic increase in segregation of students by race, ethnicity, and class.

In the interest of full disclosure, I should say that my family was one of those families of privilege that used the transfer system. At the time, it seemed the right thing to do for my son. He ended up getting a good education in PPS, but if I had to do it over, I would not do it again. All the discussion about choice focuses on the potential benefits to individuals. What we never talk about are the costs – to the students who use choice and to the students who don’t. Because my son went to school across town, he has no ties to his neighborhood, no sense of community. All of his friends lived 90 minutes away.  I believe that we need to be extremely cautious about embracing school choice in Portland.

How can the board of Portland Public Schools work to lessen dropout rates and improve graduation rates?

Jamila Singleton Munson: I believe the district's high school graduation rates will improve when the board can create a shared vision, foster a positive working environment, partner with district leadership to develop targeted investments and encourage honest conversations about divisions around race and class. I also believe we need to make more robust investments in culturally responsive, early childhood strategies in partnership with the community. PPS must also examine and improve its culture around parent engagement, authentic community partnerships, and targeted financial investments and programs in the communities left out of opportunity.

Rita Moore: Middle school is where we see some of our biggest losses of engagement. At the under-enrolled K-8s, these losses can be even more severe, since schools struggle to provide a full curriculum, never mind real electives like art, music, athletics, foreign languages, and age-appropriate career and technical education classes, many of which promote hands-on application of core subjects. We need to be more intentional about ensuring a continuum of programming for our students, so that students in the middle grades are able to explore their interests and continue to develop those passions and skills into high school. In order for students to graduate, we need to give them a reason to stay in school. In addition, I believe that we need to provide adequate funding to implement the array of supports that help students succeed, including Restorative Justice, trauma informed practices, Positive Behavior Intervention Systems, and social programs like peer and adult mentoring that help kids make critical social connections and affirm their foundation in our schools.

What are your thoughts on disproportionate discipline? Does it still prevail as a major problem for Portland Public Schools, and how might you address it as a board member?

Jamila Singleton Munson: Disproportionate discipline is a real problem that compromises the learning opportunities for too many students of color and students on an Individualized Education Plan. That is unacceptable. PPS must provide a quality public education for all of its students. We must invest in our shared efforts in creating culturally responsive learning environments and helping educators support diverse learning styles. This begins with a board that is both reflective of the students it serves and a shared board commitment to addressing our racial and cultural blind spots.

Rita Moore: Disproportionate discipline remains a significant problem within PPS and the actions taken to reduce it over the last three years have been both inadequate and, in some cases, counter-productive. I first became aware of the full scope of the problems of disproportionate discipline in 2011 when I assisted a colleague in Multnomah County with the report on disciplinary data across 5 school districts in the county.  Since then, I have followed the discussions and the data closely. Generally speaking, PPS has good policies, but has a great deal of difficulty in executing them well.

I believe PPS should have established multiple balancing measures to monitor the situation in schools. For example, in addition to the metric on exclusionary discipline, we could have three to four other monitoring measures (teacher grievances, parent complaints, student attendance, climate surveys) that could detect both positive and negative changes and help both school and district leadership track the impact of this policy on students’ experience. I remain totally committed to the elimination of exclusionary discipline, but this rollout has been another example of botched execution by PPS that is harming students. We know what strategies can work to create productive school climates; PPS needs to fund them adequately and implement them with fidelity.