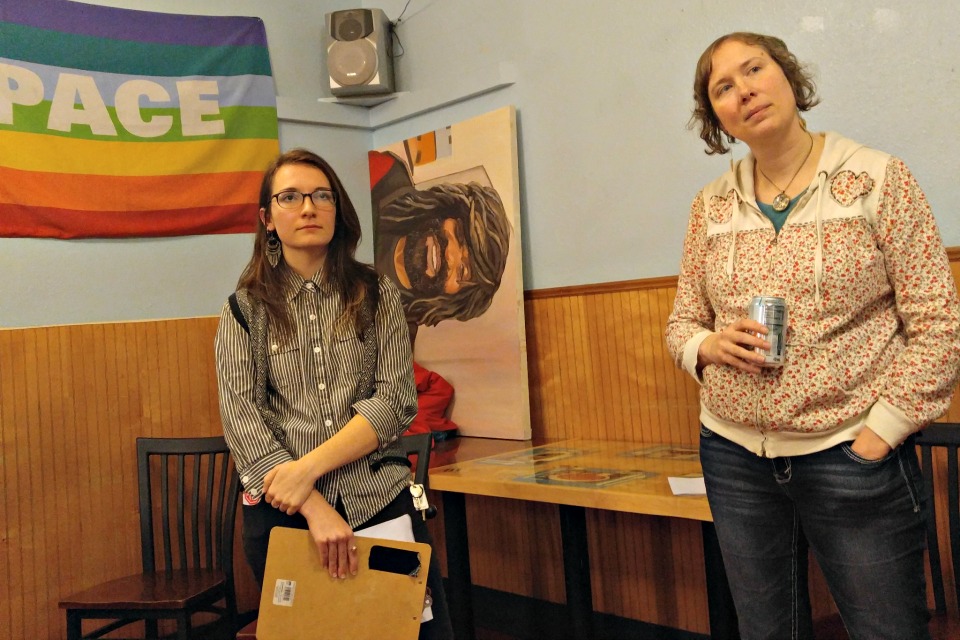 A bill before the Oregon legislature this session creates sweeping protections for unhoused people – and aims to effectively dismantle hundreds of local ordinances that criminalize sleeping in public.

House Bill 2215, which advocates are calling the Right to Rest Act, has the backing of the Western Regional Advocacy Project – a multi-state coalition of social justice organizations – and local homeless advocacy groups like Sisters of the Road and Street Roots, as well as the American Civil Liberties Union of Oregon.

It defines the ability to rest, move freely, pray and eat in public spaces as rights – and makes it illegal for law enforcement to deny those rights.

“We have public spaces for a reason. They’re for public use,” ACLU of Oregon’s legislative director, Kimberly McCullough, said at a Friday organizing meeting and informational session at Sisters of the Road Café in downtown Portland.

According to McCullough, the law would directly challenge a web of 225 city and county ordinances around the state that target resting, eating in public, sleeping in public or resting in public places and disproportionately target people living outdoors. If passed, it would allow those targeted to complain to the Bureau of Labor and Industry and challenge arrests or citations in civil court. Defense attorneys would also have the ability to challenge such charges as illegal and have them dropped.

She also noted people of color, people with disabilities and lesbian, bisexual, gay and transgender people – especially LGBT youth, who are disproportionately represented among street youth – are more likely to be singled out by these laws pushed out by homeless sweeps. According to Multnomah County’s 2015 homeless count, African Americans made up 24 percent of the county’s homeless population, but were just 7 percent of the county’s general population.

And African Americans in Multnomah County are more likely to be targeted at every tier of the criminal justice system, according to an exhaustive review of court records released earlier this year by the investigative reporting nonprofit InvestigateWest in a partnership with Pamplin Media. That includes citations for minor violations such as transit violations and jaywalking – and courts tend to charge Black residents higher fees.

Just how many people in Oregon are cited or arrested under camping or sit-lie ordinances is hard to ascertain, since these ordinances are categorized differently and will be referred to different courts depending on whether the defendant receives a civil citation or an arrest.

Jane James, a community court attorney for Metropolitan Public Defenders, told The Skanner the offense in this category that’s most frequently referred to her office is erecting a temporary structure in a public place – that is, setting up a tent outside.

“I see them occasionally, two-three times a month. A lot of times they’re piggybacked with interfering with a peace officer,” she said. The typical scenario, she said, is that a police officer has told someone occupying a tent to take it down, and that person has refused to do so.

WRAP is also campaigning for similar bills in Colorado and California. Rhode Island, Connecticut and Illinois all have Homeless Bill of Rights laws on the books.

One woman, who did not identify herself, at Friday’s meeting said she was concerned the law would give the city of Portland an excuse not to provide more housing to people who need it, and would recreate a situation like the one Portland found itself in during Mayor Charlie Hales’ term.

Hales announced in February of last year that the city would allow legalized outdoor camps and overnight tent camping in certain locations. That lasted about six months; in August, Hales announced an end to the “safe sleep” policy and law enforcement began conducting sweeps throughout the area.

McCullough told the audience member her concern was valid, and that she doesn’t see HB 2215 as the whole solution. Instead, it’s intended as a counterweight to the push to criminalize and “throw police at” social problems, and one that would hopefully force those in power to think more creatively about solutions.

“Part of the problem with what Hales rolled out was that the community that was most affected was not involved in the solution,” McCullough said. The result was that when the city started conducting sweeps, those targeted had no idea where they should or could go instead.

Karissa Moden, systemic change coordinator for Sisters of the Road, said she thinks cross-class conversations are necessary to comprehensively address homelessness – but that decriminalizing homelessness is an important first step.

The bill, which was introduced by Rep. Carla C. Piluso (D-Gresham) and Sen. Michael Dembrow (D-Portland), is currently awaiting a hearing date.

Community activist Ibrahim Mubarek, who co-organized the outdoor camping projects Right 2 Dream Too and Dignity Village, said housed people who don’t work to help the unhoused are “living beneath their privilege” and probably fail to realize that homelessness can happen to anyone.

“If you don’t fight for us now, in a few years you’re going to wish you had,” Mubarek said.