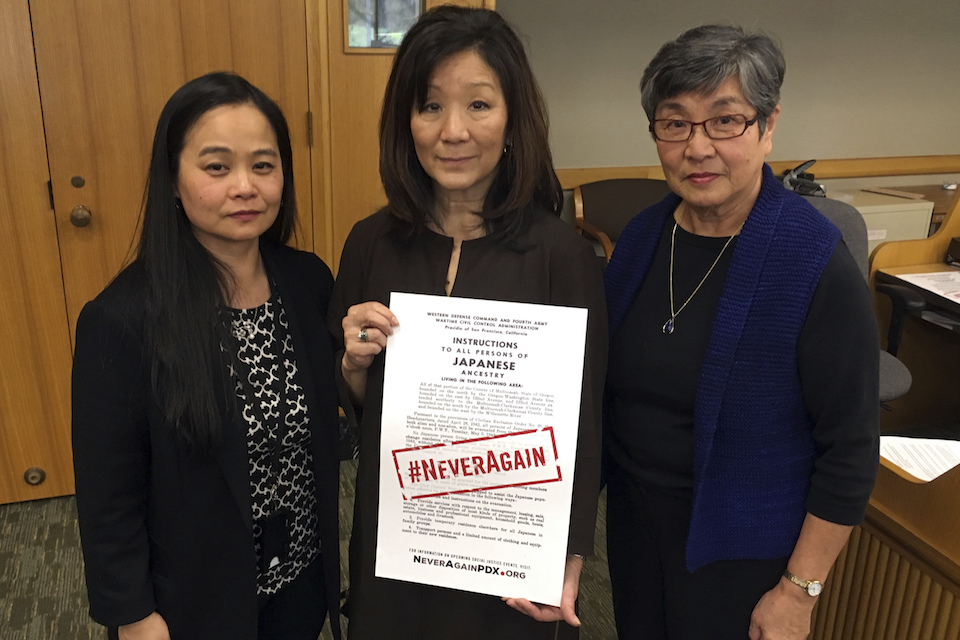 SALEM, Ore. (AP) — States in the American West are marking the 75th anniversary of the signing of Executive Order 9066 by President Franklin Delano Roosevelt that forced 120,000 Japanese immigrants and Japanese-Americans into internment camps.

Most were from Oregon, California and Washington state.

Adults, including the elderly, and children could only bring what they could carry and were transported by bus and train, often with blacked-out windows,

They were sent, ostensibly to avoid sabotage and spying, to camps in California, Idaho, Wyoming, Colorado, Arizona and other states as far away as Arkansas.

Oregon, California and Washington are not only marking Sunday's anniversary, but politicians and activists say America must learn from this dark chapter of history.

Here's a look at what states are doing to recognize the mass incarceration of Japanese-Americans:

The Oregon Legislature is considering a bill to recognize a Day of Remembrance of the mass incarceration.

Carol Suzuki's father and grandparents were forced to relocate from their home in Oregon's Hood River Valley to detention camps in California and Idaho.

After President Donald Trump recently signed immigration executive orders, her 9-year-old daughter asked if she, too, would be put away.

"Sometimes the words of an innocent child are the ones that affect you the most," Suzuki testified Monday before the Oregon Senate committee considering the Day of Remembrance bill.

Suzuki blinked away tears as she described the conversation with her daughter, who "should never be afraid of her own government."

George Nakata, 83, of Portland, told the committee about his firsthand experience with a "dark chapter in American history ... not found in many school textbooks."

He recalled being sent with thousands of other Japanese-Americans to a former livestock exhibition center in Portland, where the families were confined until rural detention camps were built.

"I can never forget, upon entering the building, the smell of livestock urine, the pungent odor of manure underneath the wooden floors."

At the Minidoka relocation center in Idaho, Nakata as a young boy recited the Pledge of Allegiance as he looked out at barbed wire and guard towers from tar-papered barracks.

The committee unanimously endorsed the bill.

Washington state began recognizing Feb. 19 as an annual Day of Remembrance 14 years ago.

Vigils, a taiko drum concert and other events are planned in Seattle to mark the anniversary Sunday.

Gov. Jay Inslee tweeted that "this anniversary should serve as an all too real reminder of what can happen when America acts out of fear." Inslee also met with former detainees.

In California, the Legislature has passed resolutions proclaiming Feb. 19 as the 75th Anniversary of Executive Order 9066 and recognizing a Day of Remembrance.

California lawmaker Al Muratsuchi, who sponsored one of the resolutions, said that with Trump focusing on Muslims in his immigration order, Americans must ensure no one is targeted because of national origin or faith.

"Now, more than ever, every American needs to remember the unjust incarceration of over 120,000 Japanese Americans during World War II," Muratsuchi said.

More than 2,000 people of Japanese ancestry were detained at camps on the islands or on the mainland.

In marking the anniversary, Honolulu businessman and poet Suikei Furuya will share his story at the Japanese Cultural Center of Hawaii.