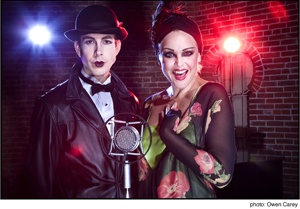 Wade McCollum as the Emcee and Storm Large as Sally Bowles in Portland Center Stage's production of Cabaret on the Main Stage, Gerding Theater at the Armory, Sept. 25 - Oct. 21.

Portland Center Stage will open the 2007-2008 season with "Cabaret," based on the novel by British writer Christopher Isherwood. Set in the 1930s, "Cabaret" portrays the chaotic period between the wars, in the place that chaos was quite possibly most intense – Berlin during the rise of the Third Reich. While most Germans were struggling to put food on the table, wealthy foreign travelers and the Berlin elite were living like there was no tomorrow. At the center of the high life was the infamous Kit Kat Klub.
Storm Large stars as the sweet and sultry Sally Bowles and Portlander Wade McCollum embodies the Emcee as the role has never been experienced on stage or screen.
Portland Center Stage: Cabaret at the Gerding Theater, 128 N.W. 11th Ave. Preview performances run., Sept. 25 to Sept. 27. Opens Sept. 28 and closes with the 2 p.m. matinée on Oct. 21. Evening performances: 7:30 p.m. Noon and matinée dates are also available. Box Office: 503-445-3700
Order tickets online at www.pcs.org, by phone at 503-445-3700 or in person at 128 N.W. 11th Ave.