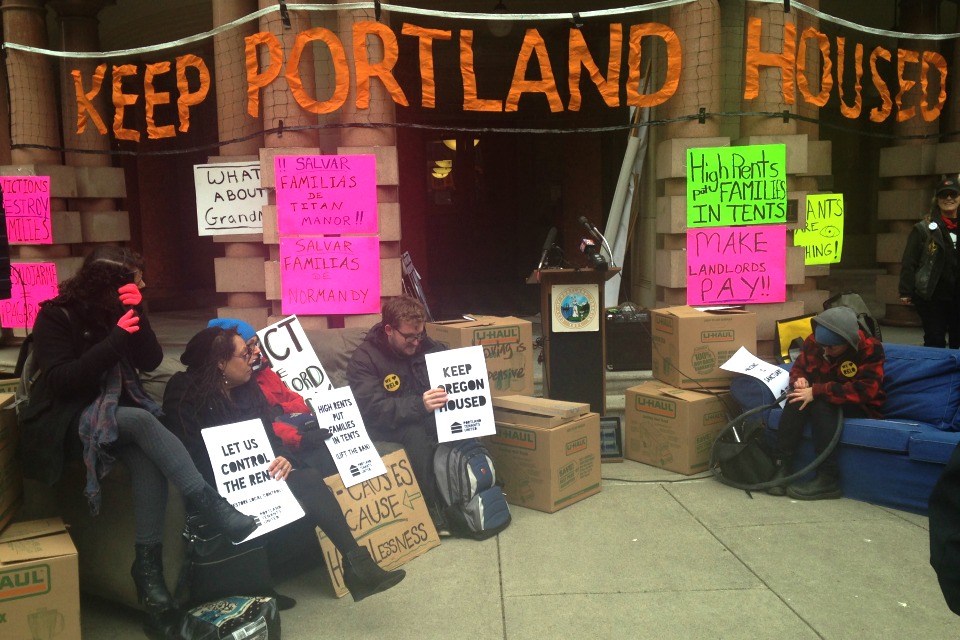 On behalf of two Portland landlords, attorney John DiLorenzo sued the city less than a week after it passed an ordinance requiring landlords to provide relocation assistance to tenants evicted without cause.

DiLorenzo did not respond to The Skanner’s request for comment, but the suit claims the new ordinance conflicts with the state prohibition on rent control.

The suit, filed Monday, follows directly on the heels of a unanimous vote last Thursday evening by Portland City Council, which passed an emergency ordinance that stands up for renters’ protections -- the boldest measure of its kind in Portland’s decades long housing crisis.

Crafted by newly sworn in City Commissioner Chloe Eudaly and Mayor Ted Wheeler, the measure requires landlords to pay between $2,900 and $4,500 in relocation fees (depending on the number of unit rooms) when they no-cause evict their tenants or raise the rent by 10 percent or more.

Days after it was passed in Portland, some Oregon lawmakers, including House Speaker Tina Kotek and Rep. Alissa Keny-Guyer, are working to adopt the ordinance statewide under House Bill 2004.

During six hours of testimony at Portland City Hall – which included panels of housing and homeless representatives, woeful tenants and irate landlords – city council managed to make tweaks and add exceptions to the ordinance. For example, mom and pop landlords who only manage one unit will be exempt from paying the fees, along with landlords whose tenants pay week-to week, and landlords who occupy the same unit as their renters.

Chelsea Deloney, an African American renter from inner Northeast Portland (and former Miss Black Oregon), gave personal testimony of being displaced from her 400-square-foot-apartment, for which she was paying $900 per month while pregnant and working two jobs, because her rent increased.

Deloney eventually finished her bachelor's degree and secured a job at a software company, but said she was discriminated against in the housing market for being a Black single mother.

"After a six month search, the only place that would take us cost 50 percent of my income per month," said Deloney. "While we can't currently afford the security deposit to even a less expensive apartment, I also can't afford to choose between feeding my son and keeping a roof over our heads."

According to data provided by Matthew Tschabold, policy and equity manager at the Portland Housing Bureau, almost half of all Portlanders are renters, and half of all renters make less than $2,900 per month. Considering that the average price of a Portland rental unit is $1,445, most are spending well over 30 percent of their income on rent.

If forced to relocate because of a rent hike or a no-cause eviction, a tenant would need to spend an average of $4,500, which includes first and last month’s rent, plus a security deposit. Twenty-five percent of renters in Portland earn less than $1,700 per month, which means it would cost them more than two months of income to afford the move.

The temporary relocation assistance ordinance, effective immediately and holding until October when the city hopes to taper the housing crisis, is Eudaly’s first big action as city commissioner. Her sympathies towards the plight of renters were integral to her election last November.

“I’m a renter!” Eudaly shouted at the podium to a rally of supporters that gathered outside the city hall, hours before the hearing began.

Even on a city commissioner’s salary, Eudaly said, “It will take years for me to undo the damage to being a cost-burdened renter for the past several years in Portland – the damage to my credit, the debts I’ve incurred.”

“Right now we know of three entire multifamily complexes, homes to dozens of low-income households, many of them people of color and marginalized populations, who are about to be displaced by no-cause or economic eviction,” Eudaly said to the crowd.

Portland Tenants United, which spearheaded the pre-hearing demonstration, said that relocation assistance has been part of their tenant bill for rights for years, but only gained momentum after Eudaly took office.

“This isn’t rent control,” Margot Black, organizer at Portland Tenants United, told The Skanner. “But it does at least give landlords pause, so they can acknowledge the costs of displacement before they assign those rent increases.”

The ordinance is the first step in leveraging  regulation over landlords, under a statewide ban that prohibits rent control measures. Housing and tenant activists, including Eudaly, have pledged to challenge state legislators to overthrow the ban, proposed in House Bill 2003, and insert  some form of rent stabilization in Portland. Until they can do so, they’re hoping relocation assistance can soften the blow of no-cause evictions.

Landlords on the defensive – but not unanimously

It’s no surprise that landlords are fired up and on the defense. They say the ordinance does nothing to address the lack of affordable housing in the city, while it will only serve to disrupt their livelihood and force them to raise rents even higher.

Christopher Frick is a Portland landlord who owns four single-family homes and three duplexes in North and Northeast Portland. He came to testify against the measure because, he said, he couldn’t afford the relocation fees. His rental homes are over a hundred years old and his maintenance costs are already too high.

Frick recently raised his rents for the first time in seven years, at a slight increase of $35 per head. He said if he adjusted his units to market value, he would be doubling his rents, which he’s not planning on doing.

While the relocation assistance will likely never affect him, he staunchly opposes it on principle.

“If everyone wants to say that housing is a human right, than the state, the county and the city government should be out there building housing,” Frick said. “They shouldn’t take it out on the backs of small entrepreneurs.”

Other realtors feel quite differently. Tim Pitts, founder and principal broker with Think Real Estate, testified that he supports the relocation assistance ordinance, and held up a stack of 20 letters from other Portland realtors that back it too.

“Things are dramatically out of balance,” said Pitts. “The vast majority of no-cause evictions are because landlords, who are usually new owners, want to make more money. We all know they can afford (the assistance), they just have to budget.”

In a sympathetic gesture towards Portland’s renters, Multnomah County Chair Deborah Kafoury and Mayor Wheeler issued an open letter this month, calling on landlords to work with tenants who have been struggling to make rent, due to state-of-emergency weather that led to missed work days.

Hearings for House Bills 2003 and 2004 will start at the beginning of March.