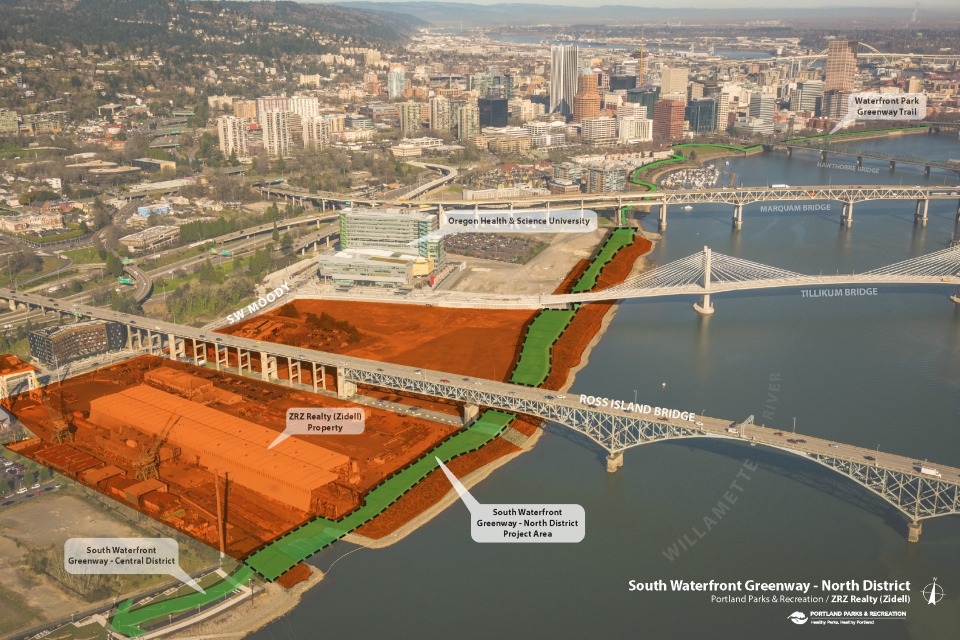 Portland’s breakneck growth can be both a topic of protest or profit, depending on who’s steering the conversation. Yet as the city’s numerous development projects trudge forward – with or without community input – some interested parties are asking for your two cents.

A number of key players and urban giants – Zidell Corp., Kaiser Permanente, the Portland Development Commission, among them – have helped sculpt Portland’s historical landscapes and contemporary additions. And on February 7 they’re coming together to lay the groundwork of a slow-churning yet much-anticipated development: the North Reach of the South Waterfront Greenway.

The meeting is one in a series from Zidell’s Project Advisory Committee, which is considering the interests of several entities over its swath of land on the west side of the Willamette River, stretching southward between the Marquam and Ross Island bridges.

While the committee is comprised of stakeholders, public representatives and agencies, and corporate consultants, February’s meeting is also an opportunity for anybody to voice an idea (or an opinion) about how the 33-acre site could benefit the community at large.

Owned by Zidell, the property (commonly called Zidell Yards) underwent a $20 million clean-up in 2011, which included 3,000 feet of riverbank restoration, as part of the 2004 Greenway Development Plan. In the decade that has passed, a lot has happened on the South Waterfront – an OHSU expansion, Tri-Met’s Orange Line, an aerial tram, and the Tilikum Crossing, to name just a few.

This year will bring a cessation of Zidell’s barge business to make way for Phase I of the company’s Master Plan. Working in partnership with the PDC and the City of Portland, Zidell has laid out the street grid, defined park areas and open spaces, and delineated between residential and commercial property.

“(The committee) has discussed what the important tenets are for the design and moving forward,” Alan Park, Development Operations Manager of Zidell, told The Skanner. “So the deliverable out of this process is about a 10 percent, very conceptual layout of what the greenway could look like.”

That means there’s some wiggle room.

As part of the City of Portland’s Comprehensive Plan, Portland Parks & Recreation (PP&R) is working in tandem with the big players to develop a trail that will close a gap in the larger Willamette Greenway Trail. The critical link would connect bikers and walkers from downtown Portland in the north to Sellwood and John’s Landing in the south. The Greenway is also part of a greater trail system, called the 40-Mile Loop (actually 140 miles now), which winds through more than 30 city parks.

“The significance of the Greenway trail is that it starts to create connectivity,” said Elizabeth Kennedy-Wong, Community Engagement Manager at PP&R.

According to a Parks-conducted community survey, the trail has credible support from southwest residents, who expressed an interest in connecting it to the Central District Trail and ensuring that it reflects the natural history of the area.

“We need to build a trail that meets the needs of the community,” said Kennedy-Wong.

But those needs could include much more, according to Henry Mead Kaiser. As an advocate of Portland’s rich history – that includes his family’s shipbuilding business, which preceded its namesake healthcare – Kaiser is focused on making the area engaging for residents and visitors alike.

While he stresses his official independence from any involved party, Kaiser said his interests lie in exploring a variety of grassroots initiatives that could come together under the Greenway umbrella.

“They need a common voice,” said Kaiser, referring to a jumble of interests and projects concerning the Oregon maritime experience, the shipyards – which brought together a mix of Black and minority workers in the 1940s, culminating in the town of Vanport – and Kaiser Permanente’s forthcoming 75th anniversary.

“If you get the critical mass in good connection with two or three key property owners or organizations in the area, then there’s an opportunity for a development that creates a footprint to enrich the city experience for the next century,” said Kaiser.

Among numerous potential uses for the site, Kaiser has suggested exhibit space for groups like The Black Pioneers and educational resources for school districts. He’s also calling on input from the Oregon Maritime Museum, OMSI, and the Portland Opera, which have all made their homes along both sides of the river.

In line with Kaiser’s sentiments is Roger Gertenrich, former mayor of Salem and member of the Project Advisory Committee. Through a volunteer effort with a small group of South Waterfront residents, Gertenrich is proposing a low-cost, free-standing outdoor maritime display to honor Portland’s nautical past through photographs, texts and artifacts.

With far-reaching support from several organizations and associations, Gertenrich believes the city’s maritime history should be one of several diverse narratives represented along the Greenway.

“What we have going here is a love story,” said Gertenrich. “Everybody loves their history, everyone loves the Willamette River, and everyone has a story to tell.”

The “open house” for the South Waterfront Greenway – North Reach will be held on Tuesday, Feb. 7, from 6 – 8 p.m, at the Southwest Charter School, 0640 SW Bancroft St., Portland.