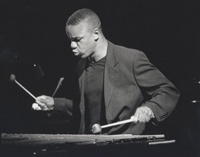 The third annual Portland Jazz Festival, Feb. 17 through 26, will feature some of the biggest names in jazz at various downtown venues.


The Los Angeles Times calls vibist Stefon Harris "one of the most important young artists in jazz." The 30-year-old Harris is a graduate of The Manhattan School of Music, where he earned a bachelor's degree in classical music and a master's in jazz performance. He has received back-to-back Grammy nominations for Best Jazz Album for "The GrandUnification Theory"(2003),and "Kindred" (2001).


In addition to leading his own band, Harris has recorded with the ClassicalJazz Quartet with pianist KennyBarron, bassist Ron Carter and drummer Lewis Nash. His work has also been heard on sessions led by Joe Henderson, Buster Williams, Wynton Marsalis,Kurt Elling and Cyrus Chestnut.


Harris is active as a music educator conducting over 100 clinics and lectures annually at schools and universities throughout the nation. He will perform at 10: 30 p.m. Saturday, Feb. 18, at the Governor Hotel, 614 S.W. 11th Ave.
Trumpeter Nicholas Payton is a New Orleans product from a musical family. His mother was an opera singer andclassical pianist and his father a respected bassist and retired schoolteacher. The family record collectionhad music by Scott Joplin;Louis Armstrong; King Oliver;Earth, Wind and Fire; Stevie Wonder; and Run D-M-C.


Payton played his first gig at age 8 with his father. He joined the traditionaljazz youth band, the All-StarBrass Band, which traveled across the United States. He later enrolled at the NewOrleans Center for Creative Arts, then studied with Ellis Marsalis at the University of New Orleans. Payton went on to perform with many jazz giants such as Joe Henderson, Clark Terry, Jimmy Smith and Elvin Jones.


He earned a Grammy in the Best Solo Jazz Performance category for his work on the tune "Stardust," which was part of the album he recorded with the famed trumpeter Doc Cheatham.


Dee Dee Bridgewater is a proven winner, chalking up such notable awards as Broadway's coveted Tony for Best Featured Actress in a Musical for her work in "The Wiz."


Bridgewater's career reached greater heights after she moved to Paris in the mid-1990s. She claims her time in France began a period of healing, growth as a woman and artist and of discovery of the rest of the world.


Her Portland concert will feature her singing, in French, selections from her newest CD "J'ai Deux Amours." All of its songs are in French except "Girl Talk." Bridgewater will appear at 8 p.m., Saturday, Feb. 18 at the Portland Marriot, 1401 S.W. Naito Pkwy.