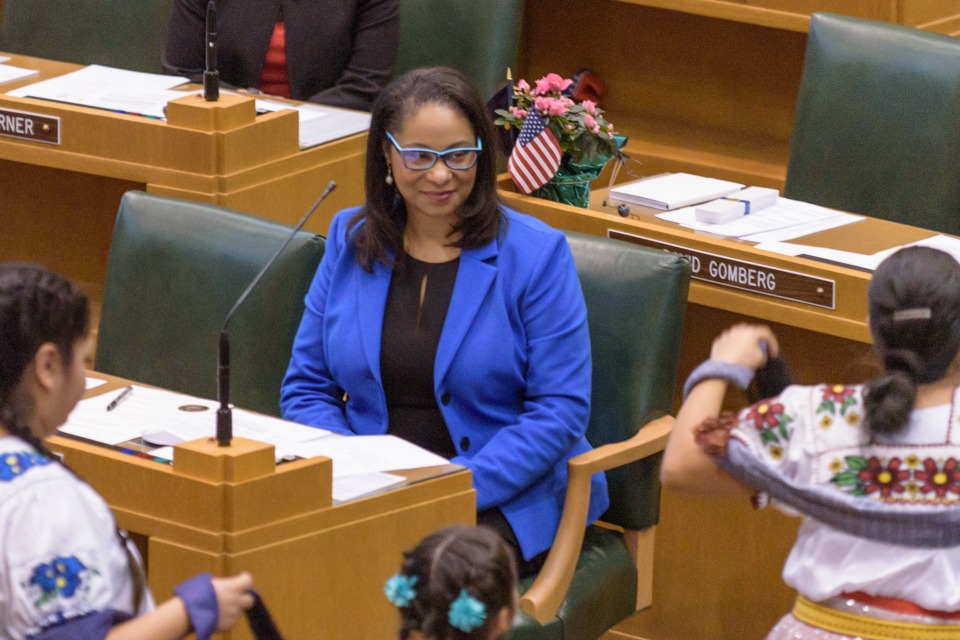 Last November, Democratic candidate Janelle Bynum made history when she took a seat in the Oregon House of Representatives as the first African American to represent House District 51.

Originally from Washington D.C., Bynum earned scholarships and attended the historically Black Florida A&M University, where she received a Bachelor’s degree in Electrical Engineering, and later got her Master’s in Business Administration. She then spent several years globe-trotting for General Motors, before settling in Oregon with her husband, Mark. The couple now owns two McDonald’s franchises and they live in Happy Valley with their four children.

The Skanner sat down with Bynum to discuss her path to politics and how she plans to tackle the job of representing her district, which encompasses the cities of Happy Valley, Damascus and Boring in Clackamas County, Gresham in Multnomah County, and unincorporated parts of both counties, including East Portland.

The Skanner News: You trained as an electrical engineer. So how did get into the restaurant business, and from there into politics?

Janelle Bynum: I don’t think it’s much different. I’m super analytical, very data-driven, I like to solve problems. But I’m also one of those people that likes to have life fit in with the laws, whether it’s the laws of nature, or the laws that men and women make. So I like to look at the 30,000-foot view and then break it down into bite-sized pieces.

I grew up in Washington D.C., and we don’t make anything in D.C. but laws -- or chaos, depending on how you view it. In high school I had an opportunity to work on Capitol Hill. I worked for Senator Arlen Specter. The reason I chose him was because when Clarence Thomas was having his hearings for his confirmation to the Supreme Court, I didn’t really like how Arlen Specter treated Anita Hill. I came from a very Democratic family and so I thought that I should find out what the Republican thought process is, what the other side was like.

Even throughout my professional career I’ve always been involved civically. Especially here in my community, I’m involved with the schools, because I really feel passionate about making sure the educational system supports the families and the kids, and supports what we need as a state.

TSN: How would you like to see education improved in District 51?

JB: My home district is North Clackamas, but what I felt was particularly acute was the needs of the students of color. But also, in general, as an employer in the area, I’m seeing what skills kids are coming out of school with. So if we can have a more in-depth conversation about what businesses need from the students, I think that’s where I’ll be able to contribute a lot.

TSN: What inspired you to run for State Representative?

I’ve been on our owner-operator PAC board for a couple of years, and through that process I’ve invited legislators into my restaurants. Having met Speaker Tina Kotek and Rep. Shemia Fagan, they were kind of kick-ass women (laughs).

Rep. Fagan and I continued to cross paths, and she had represented the district, so maybe that’s where the seed was planted. But I’m kind of a maverick and will do things that people don’t think can be done – and this is one of them, after being an engineer and a McDonald’s restaurant owner. But I went to business school too, so I’ve always been interested in how money moves.

TSN: What was the process of forming a campaign?

JB: The first part is asking your family for support, so I asked my mother what she thought of the idea. She told me that my generation wasn’t standing up, so that was kind of the kick in the pants. She said, “You all are too comfortable, you’ve been given a lot.” She came from a segregated environment and she graduated from the last segregated high school in South Carolina. I also talked to my husband, who claims I never asked him (laughs).

What I found very interesting was you had to have access to capital, and I think that is a barrier to good people entering government. That’s where I felt fortunate, because I’m a good fundraiser. I don’t like that it takes so much money to win, but you have to be willing to ask. It was also a good opportunity for people who hadn’t traditionally participated in campaigns to really be a part of it. So I looked at it as kind of a community thing, and it was energizing. And it was the most expensive campaign for a House seat ever in Oregon. You have to buy broadcast commercials, and there’s not a lot of cable penetration, so you end up in more expensive markets. It’s mostly advertising. You’ve got to get people’s attention.

TSN: How has being the first African American State Representative of District 51 shaped your platform?

JB: I see issues more through the lens of economic opportunity and not so much the racial lens. But really at the end of the day, I see it [this way]: Black families, White families, Latino families, Russian families, Chinese families – they all want to send their kids to school, they want to make a decent living, they want a stable home. That’s pretty universal.

What’s particularly important from an African American lens is the fact that I have two African American boys, who I believe deserve to grow up and be able to support their families. And then I have two girls, who deserve to be able to pick from a pool of young men – or whomever they chose to love – that don’t have a record, that haven’t been scarred, that can help them raise their families. Between education, justice and economic opportunity, that to me is probably where my laser focus would be as an African American, making sure everybody has a fair shot.

TSN: What are some of your top priorities as a State Representative of District 51?

JB: For the district, it’s actually transportation. That, I think, flows into my being a business person. How do we create economic opportunity in our state? How do we make sure our families aren’t spending more time than they need to commuting, whether that’s in a car on the road or on a Trimet bus? And then quality of life: we don’t have a lot of sidewalks in the district, so that’s super important. But there are other sub-issues for the district, for the African American community that I’d be able to talk about. Women’s issues and women’s health are [also] very important to me.

TSN: What has surprised you or challenged you about your new position?

JB: The legislature is a very representative group of people from our state. A lot of women are in our legislature, I’m super happy about that, because I think they’re able to bring a perspective of half of our population. I’m really proud of the level of inclusion Oregon has been able to generate. I am particularly concerned about the budget. As a business person, I don’t get to raise my prices because I have more expenses. I want to make sure our priorities come first and that we’re spending our money wisely.

TSN: State Democrats have already passed a higher minimum wage and paid sick leave. As a business owner, how are you planning to manage those two components?

JB: Paid sick leave -- I’ve already been doing that in my business. I’ve always believed people need time off to rest. They need time off for life. But I always have to be able to afford it, so that’s the conversation that I want to have. The second is minimum wage. From the 30-thousand-foot view, the country has to move on this, particularly for communities of color -- that’s who’s working those jobs. The flip side of that, though, is we need to make sure we maintain entry points for young workers, and make sure we’re respecting the laws of productivity.

TSN: How do you balance between being a business owner and a politician?

JB: I think what voters want it for you to be authentic about your beliefs and how you vote. Sometimes you take one for the team, but it’s all a balancing act. It’s not unlike motherhood, where you have to make some tough decisions. So whether it’s my constituents, my employees or my family, I’m an open door person, and I think most people would say that I’m fair, that I’m logical and that I’m trustworthy. On Sundays we have a family meeting, and Mondays are for business meetings. The calendar rules my life (laughs).