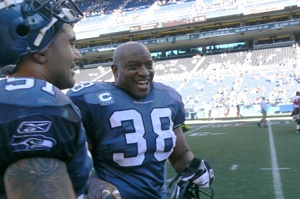 The Seattle Seahawks opened their regular season with a 20-6 win over the Tampa Bay Buccaneers on a hot, sunny Sunday afternoon in front of the largest home-opening crowd of 68,044 at Qwest Field.
"It's always nice to win the first one, so we're very happy about it," Coach Mike Holmgren said in his post-game press conference.
The players were quick to give credit to the new defense after the game which held the Buccs to no points in the final three quarters, while forcing three fumbles resulting in two turnovers.
The Seahawk defense and the five new starters, including Patrick Kerney, Darryl Tapp, Deion Grant, Kelly Jennings and Brian Russell, along with the linebackers, held the Buccs to score only field goals.
Keeping in Buccs quarterback Jeff Garcia's face, the defense sacked Garcia five times and forced him to sit out for two series after being hit by linebackers Julian Peterson and Leroy Hill. Keeping the pressure on the quarterback, Peterson finished the game with two sacks and Kerney was credited for one and a half.
After the game Peterson talked about the excitement of the new players to the team.
"All of our additions are great … so I'm very excited about our whole group," Peterson said. "I think we have a very deep rotation which is rare in the NFL and right now we're one of the few teams with a deep roster so I'm very grateful for that."
Pro middle linebacker Lofa Tatupu led the team with eight solo tackles and forced fumbles that were recovered by Jennings and Peterson.
"I thought we were very physical, I liked that part of it," Holmgren said. "I thought we rushed the passer pretty well. Our defense played a good game today."
After a slow start, the Seahawks found their groove late in the second quarter with a 1-yard touchdown run by Shaun Alexander, who finished with 105 rushing yards, after being set up by Seattle native Nate Burleson for a 56-yard punt return putting the Hawks up 10-6 at the half. There was no looking back.
Hasselbeck finished the game completing 17 of 24 passes for 222 yards.
"It's the first game," Holmgren said. "There some things I didn't like, I didn't like how we did offensively in short yardage, failed third and one attempt and a couple plays where it looked like we didn't have anybody playing defense so we gotta fix those things," Holmgren said.
Wide receiver D.J. Hackett went out of the game with a high ankle sprain and will be out indefinitely. In his spot, Nate Burleson has the starting role.
The surprise play that sealed the win was late in the fourth quarter when Matt Hasselbeck completed a 34-yard touchdown pass to Oregon Duck alumni backup running back Maurice Morris, the longest reception of his career.
The play was not designed for Morris, instead receiver Bobby Engram was supposed to be the primary option, but was double teamed; Morris stayed with his route and made a great catch and drive into the endzone.
"When I saw the linebacker out there I said it's a good chance that Matt might come at me and I had to make the catch," Morris said. "I was just happy eight (Hasselbeck) threw the ball my way and I was fortunate enough to catch it. It was a great throw, eight (Hasselbeck) took a chance on me so hopefully Coach Holmgren's not mad at that."
No Mo, we don't think he is, and neither are the fans.