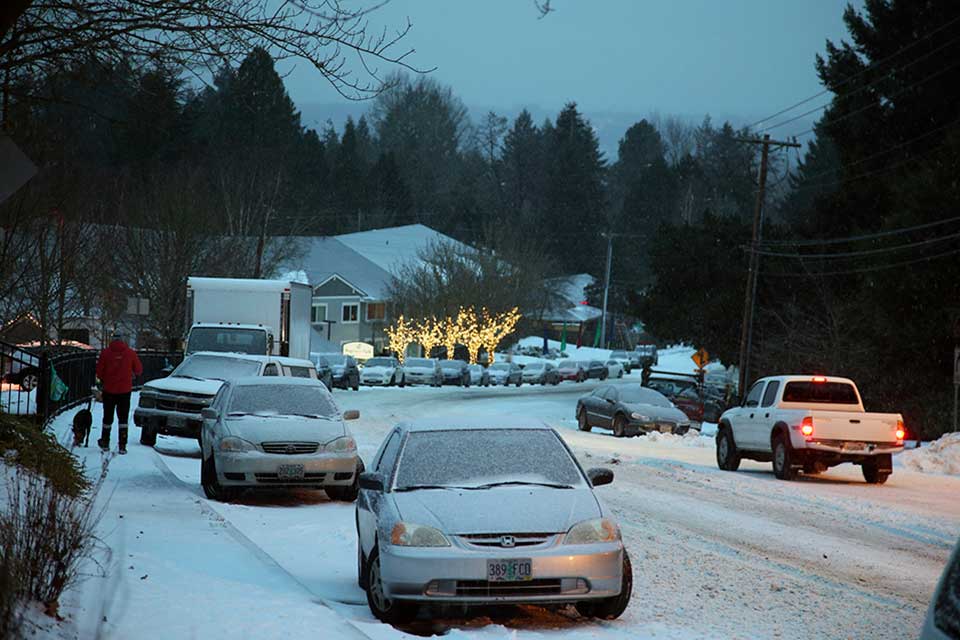 The National Weather Service said commuters should be prepared for snow-covered streets Thursday morning and possibly some more snow, but no real accumulation.

"We might get to barely above freezing but it would only be for an hour or two," meteorologist Colby Neuman said. "The snow that we have in Portland is going to stick around for the next couple of days."

Only 1-to-3 inches of snow fell around Portland on Wednesday, but ice and the rush-hour timing created havoc.

Many commuters found themselves on streets clogged with traffic that was inching along on snow-slick streets. Cars fish-tailed, spun out and collided. Semi-trucks littered Interstate 5, some of them unable to move to the side before getting stuck.

After more than three hours of waiting to travel just a few miles, some motorists abandoned their vehicles and started walking. Others hoped they wouldn't run out of gas.

Kimberly Wrolstad had been stuck on I-5 heading to Tigard for about 90 minutes Wednesday afternoon. She had a quarter tank of gas left.

Some buses from Portland Public Schools were trapped in on the roads and an unspecified number of buses had been involved in crashes, The Oregonian/OregonLive reported. Interim chief operating officer Courtney Wilton said he had not heard of any injuries in those accidents.

The winter storm crept north up the Willamette Valley, the most populous part of Oregon, before reaching Portland, first hitting Eugene and then Salem.

The National Weather Service said a major ice storm hit in Eugene. The City of Eugene said ice-laden trees had led to 140 calls about downed trees and power lines. The Register-Guard reported that several thousand Lane County residents lost power, and crews were working furiously to restore it.

Portland does not use rock salt on its roads, for environmental reasons, and because snow is so rare. Portland was ready to put city buses on snow routes, and had taken other precautions, but the suddenness of the storm caught many off guard.

"One of the problems that we see is everybody decides when a storm starts to leave for home at the same time," Oregon Department of Transportation spokesman Don Hamilton said. "We try to encourage people to get themselves safely situated before a storm hits. Don't decide to head out only after it starts. That creates the kind of gridlock we saw last night and this morning."

Portland city officials on Wednesday night declared parking meter amnesty, allowing drivers to leave their cars parked overnight without penalties. The Oregon Department of Transportation imposed a chain requirement on Interstate 5 from Albany to Portland and even some bike paths across the city's famous bridges were closed.