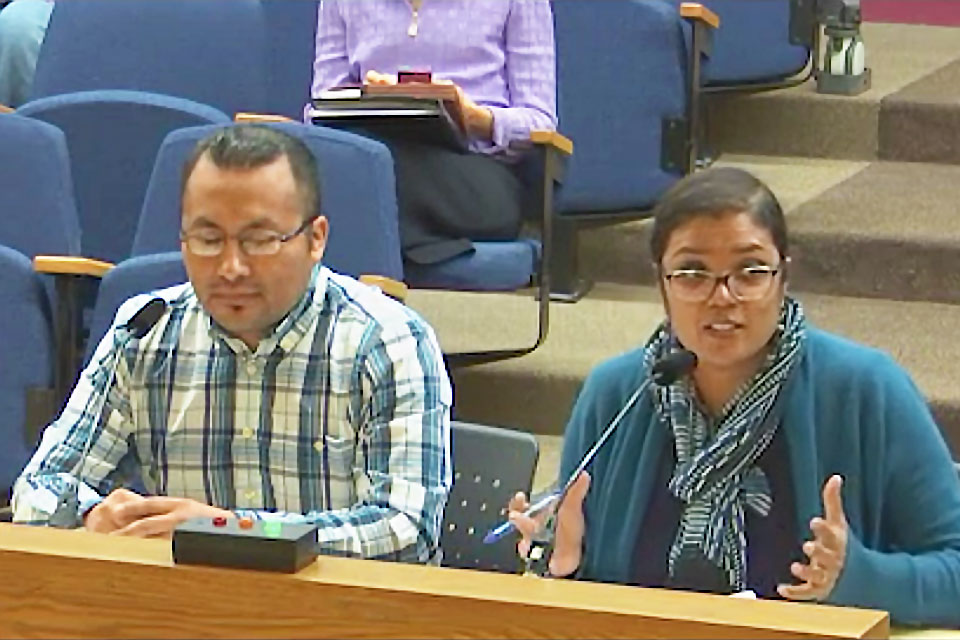 In the wake of the election of Donald Trump, Portland Public Schools voted to make it harder for immigration officials to seek out undocumented students and families.

Thursday night the PPS school board unanimously passed a resolution protecting community members from the U.S. Immigration and Customs Enforcement officials who come on to PPS property to remove students or collect information.

School board member Julie Esparza Brown, who introduced the resolution, said the action was in response to the fears from students, parents and the community. President-elect Trump campaigned heavily on the promise of the mass deportation of undocumented immigrants.

“There’s been a lot of hateful, negative and scary rhetoric over the past couple of weeks and with that comes a lot of fear and uncertainty in our community,” Brown said.

The resolution designates PPS schools as a safe space for all students regardless of immigration status. Any ICE officer must first notify the superintendent and district legal counsel before entering PPS property. The officer must provide legal validity for any request and written authority by Immigration and Naturalization Services.

The resolution states that all ICE attempts need to give adequate notice to verify the legality and to allow PPS officials to take steps to provide for the safety of students and staff.

Additionally, PPS staff cannot ask about a student or family member’s immigration status and can not reveal information about that status without parental consent. The resolution gives the school system 90 days to train staff to interact with ICE officials.

School board members Brown and Amy Kohnstamm said they were getting a number of calls and emails from worried parents. Brown said that they could not help the national political environment, but they could affect change locally.

“We can’t control what happens at the national level, but in our own lives at work, at school, in our communities and across our institutions, we can stand up against any racism, sexism, xenophobia -- any form of hatred,” Brown said.

According to a report by the Southern Poverty Law Center, K-12 schools are the most commonly reported site for hate-crime harassment after the election. Portland Public Schools interim superintendent, Bob McKean, said in a statement Tuesday that the number of incidents of hate speech had “risen significantly” after the election.

School board student representative Aliemah Bradley acknowledged the grassroots organization of the students after the election.

“I would just like to say thank you to all the students who are organizing and supporting each other right now, it’s really really powerful and really great work, so continue to do that,” Bradley said.

Parent and organizer Raahi Reddy testified as the school board meeting in support of the resolution. She thanked the board for their quick action, but also urged them to expand their services to the other groups the upcoming Trump administration has threatened.

“I also want to encourage you in your 90-day plan to really think about how more comprehensive you can be...to build inclusive schools that support Muslim families and children, transgendered children, LGBT youth, kids of color and other families that will be targeted in the kind of hateful rhetoric we’ve already seen,” Reddy said.

Earlier in the week, Kansas Secretary of State Kris Kobach, who has been tapped as an advisor to Trump’s transition team, spoke of a proposal to register immigrants from Muslim countries. Another prominent Trump supporter, Carl Higbie, referred to World War II-era Japanese internment camps as a legal precedent for a Muslim registry.

Octaviano Merecias, the policy and civic engagement manager with Latino Network, also testified in support of the measure. Merecias said that youth need a safe place to learn and thrive without fear of immigration officials.

After the resolution had passed, the school board received a standing ovation from the small crowd in the room. Board member Steve Buel dismissed criticisms that the resolution was a political move.

“My responsibility is, I am elected to make sure the children in this school district get a solid education -- all of them,” he said.