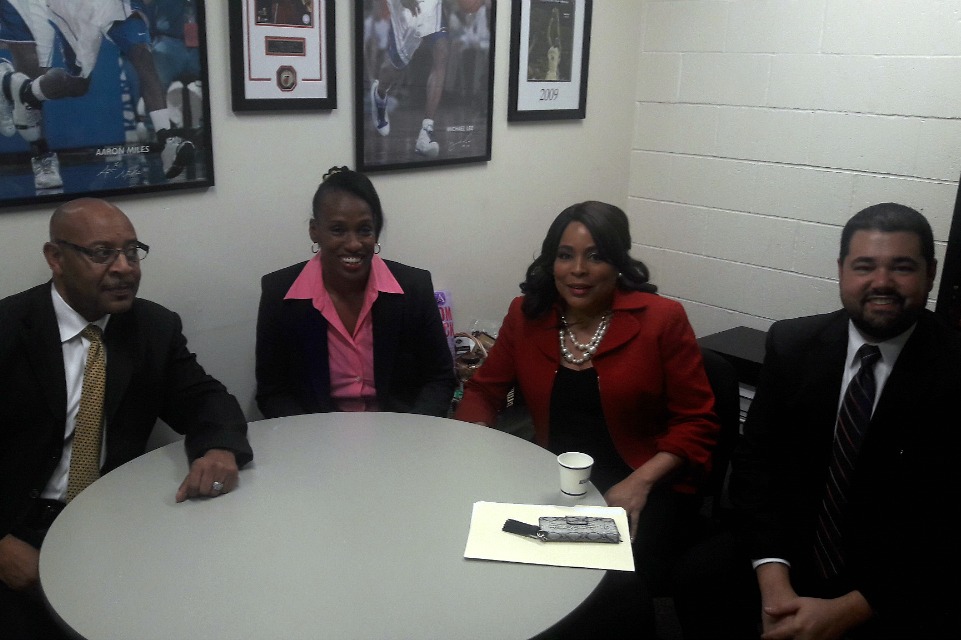 Retired Olympian Jackie Joyner-Kersee visited Portland Monday to talk about closing the city’s digital divide – and for 143 Portland families, that divide got smaller.

Self Enhancement, Inc. hosted an event Monday afternoon to promote Comcast’s Internet Essentials program, which offers no-contract Internet access to low-income families – along with in-person, printed and online training opportunities to familiarize users with computers – that culminated with 143 families going home with free laptops. None of the families had been notified they’d be leaving with a laptop.

Internet Essentials customers -- who qualify if they have children who are eligible for free or reduced lunch or if they live in subsidized housing – can also purchase laptops for $150 through Comcast.

Since 2011, when Internet Essentials began, Multnomah County – recognizing that $150 can be a burdensome amount for many families -- has dedicated funding to purchase laptops for eligible households in partnership with Comcast.

County commissioner Loretta Smith said the county works with organizations that serve low-income families, such as Head Start or SEI, to identify families who might benefit from the gift of a laptop and from reduced-cost Internet access, as well as digital literacy training.

Mari Young, a mother of two who spoke with The Skanner in advance of the laptop giveaway, works for a medical equipment company and said she primarily accesses the Internet using her phone, or sometimes borrows her mother’s laptop – but connects through the Internet Essentials wi-fi service rather than her phone’s data plan.

“A lot of times, [my children] have assignments where they have to research things at home, and we don’t have a computer so it’s kind of harder to walk to the library or wait around to use a computer,” Young told The Skanner.

SEI founder Tony Hopson said most of the families who received laptops Monday were part of the Jefferson High School cluster, with many living in Northeast Portland or East Portland.

According to Rebecca Brown, senior manager of community investments at Comcast, about 18,000 families in Oregon and southwest Washington have used the Internet Essentials program since its inception in 2011. Initially, the program was available only to families with children who qualify for free or reduced lunch. In August, Comcast partnered with the Department of Housing and Urban Development to offer the program to families in HUD-assisted residences, public housing or Section 8 housing – making 30,000 more households eligible for the program.

Nicolas Jimenez, senior manager for Internet Essentials, said Comcast works with nonprofits and institutions like libraries all over the country to provide digital literacy training, and the way the program is implemented will vary depending on what individual communities need.

“We work with nonprofits, with libraries to provide in-person digital literacy training. We work with partners all over the country. The way that work is implemented can vary slightly, but it’s all about building awareness of the fact that this program exists, providing training and resources so we can get folks to cross over the digital divide,” Jiminez said.

“The most important part of this effort to me is things becoming actionable, with the training that’s necessary and with the families being connected to something that’s going to continue,” Hopson said. “We could have three million, we could have ten million folks who’ve touched a computer. That don’t mean that they really know what to do with it and that they’re going to follow through and it becomes a part of their life, that the access becomes so real that now they’re a better individual with more access to jobs and all kinds of things.”

Before she became the spokesperson for Internet Essentials, she said, Joyner-Kersee created a community center in East St. Louis that included a computer lab to help ensure kids would have the ability to have Internet access for homework – and parents for job applications.

“We’re in a global economy. When you talk about that digital divide, if young people do not have access to the Internet to do their homework. You’re talking about, really, the diminishment of self-esteem and kids dropping out of school because all the homework is on the Internet. Also, when parents are trying to apply for jobs or do applications, a lot of it is dealing with technology,” Joyner-Kersee said. She went on to say that watching families receive their new laptops was “like Christmas coming early.”