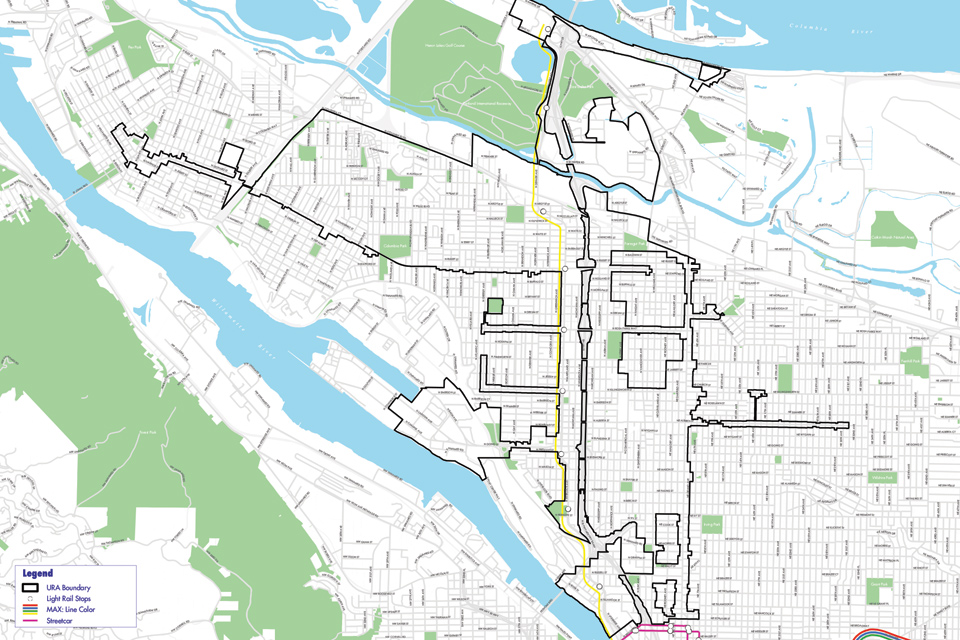 The large community center next to the New Song Church was filled to capacity. Tables overflowed, chairs in the back of the hall were all occupied as well. More than 140 community members came to weigh in on how to spend $32 million dollars in Northeast Portland.

The Portland Development Commission held a community forum on the N/NE Community Development Initiative. The goal is to create economic prosperity for longtime residents in the Interstate Corridor Urban Renewal Area.

The interstate corridor had been designated as an urban renewal area in 2001 with the intention of making investments that would benefit existing residents and businesses. The corridor is the city’s largest urban renewal area. It includes the area north of the Broadway Bridge to Marine Drive, parts of the space extend west into St. Johns neighborhood.

The development agency estimates a 49 percent decrease in the Black population of the area between 2000 and 2013. At the same time, the White population grew by 23 percent.

“What we have not done was benefit those who were the intended beneficiaries, the longtime residents and the business owners there and part of that is that we dramatically underestimated the market forces,” Branam said.

Branam said that PDC had spent more than $67 million in the area, but that amount was dwarfed by more than $1 billion being spent by private investment -- which displaced the Black residents.

The draft plan acknowledged the massive destabilization of the community and the focus of the remaining urban renewal money to benefit Black community members.

“The investments are ... specifically pointed to ensuring that with the remaining Interstate Corridor economic development resources are primarily directed towards the community of color that has been most negatively impacted by the changes,” the plan states.

The money comes from tax-increment funds that are slated for economic and redevelopment purposes. The money needs to be spent between 2016 and 2021, before the urban renewal area expires.

Because they are using tax-increment funds, they can only be spent on the planning and construction of physical improvements. They can’t be used for workforce development or employment assistance.

Tory Campbell, the PDC interim economic development director presented the draft plan at the community forum. Campbell talked about strategic ways to use the money to create wealth through property development.

Campbell spoke about fostering multigenerational wealth, the passing down of assets and knowledge down generations. He spoke about wealth inequality as an effect of policies enacted two or three generations ago.

“It wasn’t that people were not savvy enough to get homes, it wasn’t that they did not work hard,” Campbell said. “It was that they were denied those opportunities through racist policies that were enforced – even, in many respects, into the ‘80s and ‘90s here.”

The draft version of the plan calls for $21.5 million to go towards multi-generational wealth creation and $10.5 million to create culturally relevant spaces.

The $21.5 million multi-generational wealth development will be spent on grants and loans. These will support home property development, tenant improvements, the creation of affordable retail space and pathways to homeownership.

The $10.5 million to create culturally relevant spaces has $8 million allocated for one or two loans for large signature projects that would create a space to offer culturally significant services, food or entertainment. The remaining $2.5 million will be awarded as community livability grants for local nonprofit projects.

An earlier version of the plan included a proposal to create jobs by granting or loaning money to businesses that would hire employees from the community. An earlier community forum did not favor this proposal. Members were wary that businesses would not follow the benefit agreement or that the Black employees would leave due to a hostile workplace.

Campbell told The Skanner News that community members have been focused on the most direct means of creating wealth.

“It was ... wanting to ensure that the dollars that are being directed to working with individuals and ownership opportunities,” Campbell said.

Campbell and PDC project manager Kim Moreland said they will compile the feedback from the forum and add it to the final draft. It will go to PDC for approval on Nov. 9 and then to Portland City Council at the beginning of January.