By The Skanner News
Published: 05 September 2007 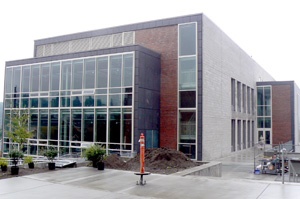 After more than two years of construction, Cleveland High School finally has a new face. A dedication and ribbon-cutting ceremony was held on the morning of Sept.4, to celebrate the reopening of the restored and renovated school.
The school, originally built in 1927, was part of a $67 million remodeling project made possible by voters who approved the $398 million Building Excellence II capital levy in February 2001. During the remodeling process, the students spent the past two years attending school at Louisa Boren Junior High School in West Seattle and many are excited to be moving back into Cleveland High School this week.
The interior of the 80,500-square-foot building was modernized while preserving the historically landmarked portions of the school. Now the total facility size after renovation is 172,000 square feet. The contractor was Absher Construction and Mahlum Architects designed the project for the school.
The original façade has been preserved including the brickwork on the original building but there are three new buildings that include a three-story classroom, a gymnasium with cafeteria meeting space, and student commons. The new commons/cafeteria area has exposed trusses, dropped lights and an area that looks down over the gym.
Student capacity for the high school is now 1,000, up from 783, and provides spaces for small learning communities within the school.
The theatre, one of the largest in Seattle Public Schools, was restored to its original beauty while incorporating state-of-the-art performance amenities, including new seating, lighting and acoustic finishes. The exterior terracotta and brick work was cleaned and windows replaced. The two new buildings are ground-faced masonry block, similar to the terra cotta of the main building. Aluminum windows cover openings similar in size and scale to windows in the original structure. Brick infill at the north and south ends match the original brick and anchor two- and three-story expanses of a glass curtain wall.
The school, located on 15th Avenue South and Lucile Street, features 51 new and renovated classrooms, new library and computer labs, wall to ceiling windows and skylights, wider hallways with gathering areas, elevators, seismic bracing and the library has been moved from the second to the third floor.
The most visible change is the removal of the high retaining walls on the east side of the site which separate the school from the adjacent neighborhood. With the walls removed, the site is open through two courtyards.
To keep out the noise of airplanes taking off and landing from Boeing Field and Sea-Tac, contractors installed double-thick windows and sound-proofing material with extra heavy layers on the noisy west side of the building.
There will be a community open house, grand opening and all-class reunion Saturday, Sept. 22 from 10 a.m.-2 p.m. where you can tour the school, meet up with alumni and enjoy musical entertainment.