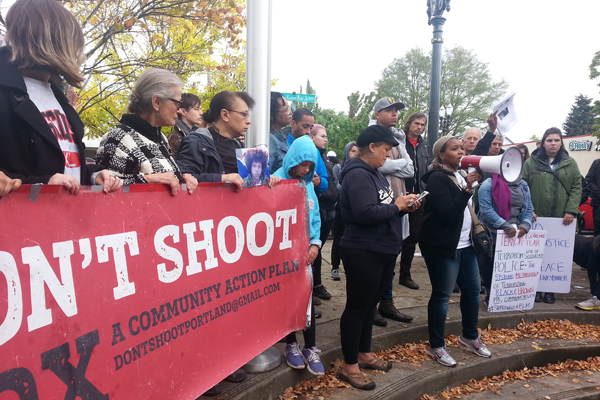 Mayor Charlie Hales has decided to delay the vote on the Portland Police Union contract for at least a week. While the contract would have eliminated the 48-hour rule, it contained a controversial provision to allow officers to view body camera footage before writing up encounters.

The council chambers were packed with police accountability activists and civil rights advocates who questioned the bargains made in the contract deal.

“The council needs time to not only have heard the testimony we've heard today but also to cross examine our own staff and get some answers,” Hales said as he closed testimony.

After a long delay, a contentious battle over location and a tent-occupation of the grounds in front of city hall, Mayor Charlie Hales met with the activist group Don’t Shoot Portland.

The meeting was initially set for 4 p.m. Tuesday at City Hall, but city officials changed the location to Vancouver Avenue First Baptist Church in North Portland. Around noon on Tuesday, Don’t Shoot Portland issued a press release refusing the location change and opting to protest at City Hall anyway.

They arrived to find the doors locked. When asked why Hales changed the meeting location, he told KGW that he did not want an occupation of City Hall.

“I’m not interesting in facilitating the occupation of a public building,” Hales said. “What I did want to facilitate is a conversation about these issues, and they’re really important.”

The choice to switch locations inflamed an already-tense relationship between the city and Don’t Shoot Portland. On Friday the group rallied for Black lives after the deaths of Terence Crutcher in Tulsa, Oklahoma and Keith Lamont Scott in Charlotte, North Carolina.

What began as a peaceful march turned violent as police officers clashed with Don’t Shoot Portland protesters. The activist group issued video from the protest that shows clips of alleged police brutality.

In one video a police officer appears to fire a weapon near a protester’s feet; another shows a police officer on a bicycle breaking a banner being carried by activists. Another video clip shows protestors being pepper sprayed by police.

The group issued a press release condemning violence both from and towards protesters.

“We do not want riots to occur in Portland. We do not want our city to see the same destruction as Ferguson, Baltimore or Charlotte. However, it is us that have kept our city from spiraling into similar circumstances, as the police here have met peaceful protestors with the same mindset as in those cities,” the press release read.

Sergeant Peter Simpson told The Skanner News that community members who saw or experienced police misconduct should file a complaint.

“The Portland Police Bureau takes complaints about officer misconduct seriously and encourages anyone who believes there were a witness to, or the victim of police misconduct to contact the Independent Police Division to file a complaint,” Simpson wrote.

The group also issued a series of demands they say would improve police accountability. The demands include:

Hales met with the group outside City Hall for nearly 50 minutes. He answered questions about police actions during protests, changes to the Community Oversight Advisory Board, discipline of police officers and homeless sweeps.

Irene Kalonji, the mother of Christopher Kalonji, talked about her son’s death at the hands of the police. The Oak Grove teenager was killed January 28 of this year by Clackamas County Deputies who were called to resolve a mental health crisis. She asked Hales how long will the killing of Black people by police continue.

Hales offered sympathy and hope that people could work together to avoid more deaths like her son’s.

Despite the attempt at an open forum, the discussion began and ended with anger at the change of venue. On Friday, protesters were told to lodge complaints against PPB officers during the original Tuesday visit to city hall. One community member, who identified herself as Danielle, spoke angrily of being locked out of the building.

“So you said we should file a complaint but we are shut out of City Hall today?” she asked.

Her question was echoed by many others in the crowd.  It was at that point, Hales left the forum that evening. Wednesday morning Don’t Shoot Portland issued a press release saying that community members were not satisfied with the meeting with Mayor Hales.

“Many of these community members felt that their voices were still not heard and stayed at City Hall throughout the night and will remain through today’s city council hearings,” the release stated.

Don’t Shoot Portland members plan to testify at City Council to ask the government to delay a vote on the Portland Police Association union contract. The contract would last for the next three and a half years and would drop the 48-hour rule in favor of police pay raises.

Don’t Shoot Portland members believe this contract is being fast-tracked and would like more public scrutiny, including the input of Mayor-elect Ted Wheeler.

The need for protection of Black lives was tragically underscored last night as Alfred Olango, another unarmed Black man, was killed by police in El Cajon, near San Diego, California.