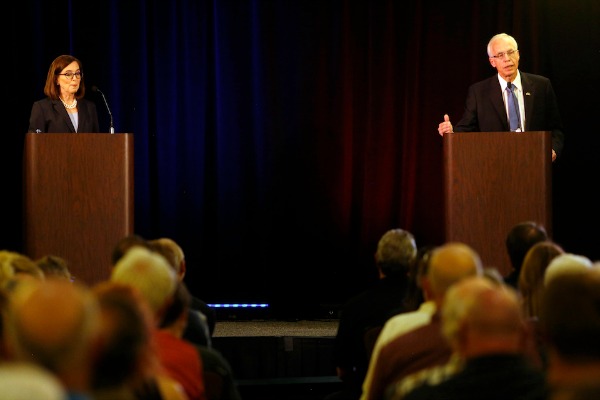 BEND, Ore. (AP) — The Republican candidate, a man with no political experience who says his private sector background can bring new vision to government, squared off in an inaugural debate against his Democratic opponent, a woman deeply steeped in politics.

However, this debate Saturday evening wasn't Donald Trump vs. Hillary Clinton. It was between Bud Pierce, the GOP nominee for governor, and Gov. Kate Brown. And it was probably a whole lot nicer that Monday's debate between the presidential candidates will be.

The debate here highlighted stark differences in how the two candidates want to solve Oregon's problems. Brown, for example, supports ballot Measure 97, which would see companies that do more than $25 million in businesses paying a tax.

"Our budget is facing a $1.3 billion shortfall," Brown said at the packed conference room at a hotel in Bend. "That's why I support Measure 97."

Brown said the money is needed to help fund education, health care for senior citizens and other critical services.

"It's time corporations pay their fair share," she said.

Pierce said the measure would increase the cost of living for every Oregonian and that instead state government should learn to live within its means. A theme Pierce hit repeatedly was his contention that Democrats create more government programs with more bureaucracy instead of redirecting resources. Brown said Pierce wants to cut social programs.

The enthusiastic crowd seemed fairly evenly split between the candidates, judging by the applause each received after responding to questions from a panel of journalists. The debate was organized by the Oregon Territory chapter of the Society of Professional Journalists.

Brown was secretary of state when she ascended to the governorship when Gov. John Kitzhaber resigned amid an influence-peddling investigation. Pierce is a Salem-based oncologist who runs several clinics. They are competing to fill the remaining two years of Kitzhaber's term.

One journalist on the panel asked about a proposal to make the remote and scenic Owyhee Canyonlands in southeast Oregon into a federally protected monument. A county sheriff has already warned that armed outsiders might come if President Barack Obama creates the monument, with families suspicious of the federal government and what restrictions on ranching it might impose.

Pierce said many locals oppose the proposal, and asked "Do you trust the people who live on the lands who manage the land for many years or do you trust people from the outside, people who have a political agenda?"

Brown said Secretary of the Interior Sally Jewell has told her that the department is unlikely to move forward on a monument designation unless there has been a process where voices both pro and con have an opportunity to be heard. Pressed further, Brown would not be pinned down on whether she herself supports the monument designation.

Pierce has said the federal government has mismanaged the huge swaths of land it controls in the West and that he would fight for more state and local control. Asked how he would do that, Pierce said he would propose changes with the federal government in which 5 percent of land per year is transferred to the states and counties over a 20-year period.

Brown said such a goal is unrealistic and spoke of a "good neighbor agreement" she signed with the U.S. Forest Service in which parties would work collaboratively to thin the forests for fire prevention.

"It's a win because it puts Oregonians back to work in our woods and it also creates healthy forests," she said. She said these efforts boosted timber harvests on federal land by 15 percent in 2015 in eastern Oregon.

Before the debate, the audience was told that they could applaud but that jeering was forbidden.

"There's enough mean-spiritedness in politics today," said John Sepulvado of the SPJ. "We can keep it out of here."

The candidates stayed polite, without interrupting each other. Forced grins appeared to be pasted on their faces. The worst it got was when Pierce scoffed at a reply from Brown, calling it a non-answer. Brown then said Pierce's own reply "also was a non-answer."

After it was over, Pierce told The Associated Press that he wanted the debate to be lively because the public seems "disengaged" from politics, but that he didn't want the acrimony displayed in politics on the national level because "it's not edifying."

"I hope Monday's debate goes like this one," he said, referring to the upcoming debate between Clinton and Trump.

It was one thing both he and Brown agreed on Saturday night.

"Obviously, this was a respectful and courteous debate, and I hope that our federal candidates will act the same way," Brown told the AP. "Given Donald trump's track record, I'm not optimistic about that, however."