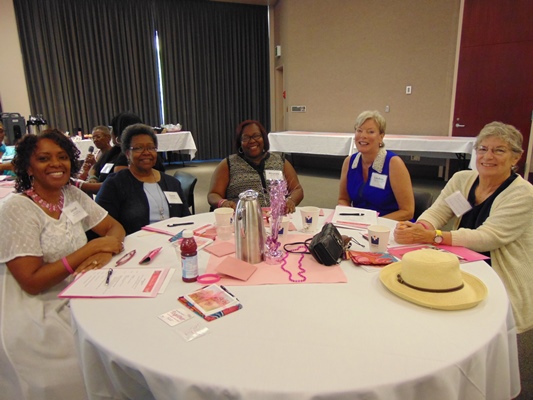 As a big pink display of community involvement, over 30 churches in the Portland metro area are organizing activities that promote breast cancer awareness and the importance of screening in early detection.

The growing Worship in Pink program, directed by Susan G. Komen Oregon & Southwest Washington, is held during October’s Breast Cancer Awareness Month.  Volunteer Ambassadors from each church are trained in the message and are provided resources to use at their activities.

As a way to work towards closing this gap, seven of these churches are going above the regular Worship in Pink program and assisting women in need to receive a mammogram as African American Initiative Pilot Churches.  Pilot Church congregations are at least 50% African American.  Their Ambassadors will receive additional training on both insurance options, for the insured and uninsured, and how to motivate and help someone through the process of getting a mammogram.  In the months following their Worship in Pink activity, they will contact and help attendees who ask for assistance.

Worship in Pink is truly a community wide project with churches working together on outreach and education. Janet Long, one of Allen Temple CME Church Ambassadors, was one of the original Pink Ambassadors from the first Pink Sunday event held in 2010.   Her congregation has persevered through two devastating fires to their church building and is now combining their efforts with another church.  Janet says, “in February 2014, Maranatha Church graciously allowed us to hold our worship service in their building. With us sharing the same building for worship, we became bonded in a new way and wished to share the Worship in Pink experience as well.  Last year was our first joint collaboration where we hosted a “Lunch and Learn” event. This year our “Lunch and Learn” will be held at Maranatha Church on October 8th from 1pm to 3pm with special guest Dr. Natalie Johnson, a surgical oncologist and breast cancer survivor,”

Christell Harris, Maranatha Church’s Women’s ministry leader and usher, is also an Ambassador with Worship in Pink. Her involvement began a few years ago when the issue became deeply personal.  One of the church’s ambassadors had recently passed away from breast cancer and then just a couple of months later, the woman's daughter passed away from the same disease.  It was devastating to Christell.  She says “I was close to both of them.  After they passed I wanted to reach as many people as I could.  It is more than just awareness - it is important to get the mammogram.  Even if you don’t have insurance, there are places where you can get a free mammogram.”  Dr. T. Allen Bethel, Senior Pastor at Maranatha, says of the program, “Worship in Pink is important because many African Americans often are diagnosed in late stages; Worship in Pink helps bring awareness and access to combat this deadly disparity and see us all proper in our health.”

For help in receiving a mammogram, attend a Worship in Pink activity at one of these African American Initiative Pilot Churches:

The complete Worship in Pink schedule of activities can be found at KomenOregon.org.