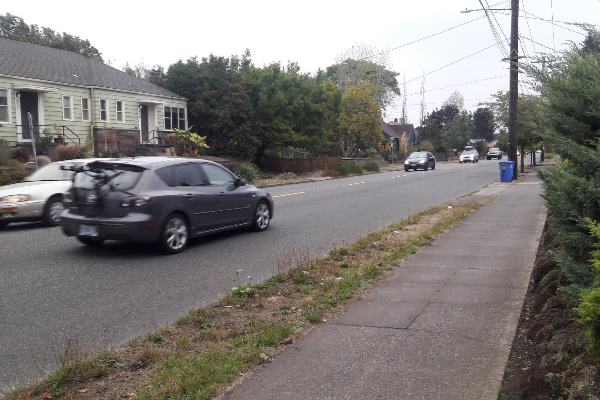 More than 340 people have donated more than $12,000 to help a Northeast Portland family replace their car and address the medical expenses and trauma associated with a racist assault on three Black children last week. This Sunday, a multiracial group of Portland bicyclists is going for a ride against hate.

In an interview with The Skanner News earlier this week, family members said they are grateful for the outpouring of support after the assault, which police are investigating as a racially motivated incident.

According to police reports and interviews, on Sept. 13 three young African American boys were pepper sprayed while sitting in a parked car waiting for their mother at Northeast 9th and Killingsworth, by an attacker who rode up on a bike, sprayed pepper spray through an open window and yelled racial epithets at them. The crime is being investigated by Portland Police Bureau’s bias crimes unit.

The boys attacked are 12, 11 and seven-years old. According to Foia Frazer, the boys’ mother, she and Patricia Garner, the boys’ grandmother were indoors exchanging keys at the time of the incident and came outside after they heard the children screaming. The car was fuming.

The boys and their grandmother were treated onsite by paramedics. Frazier also told The Skanner she took the oldest boy to the emergency room for treatment, since he was closest to the open window. All three children went to followup appointments Saturday, and she said they continue to experience skin irritation and itchy eyes.

A hospital nurse told her the children were most likely attacked with bear spray – a form of pepper spray that contains a lower concentration of capsicum than pepper spray marketed for self-defense against human attackers. Some outdoor recreation stores -- like REI -- sell bear spray in canisters specifically designed to fit the water-bottle holders on bikes, and market it for mountain bikers who fear they may encounter bears on trail rides.

“People exposed to bear/pepper spray would be treated for irritant exposure if needed. Depending on the severity of exposure, we would deliver the appropriate level of treatment,” said Sue Reynolds, nurse manager of the Children’s Emergency Department at Randall Children's Hospital at Legacy Emanuel in an emailed statement to The Skanner. “This would include airway treatments if needed (bronchodilators), comfort measures or medications for pain/discomfort, eye irrigation with saline, shower with soap and water, and continued monitoring of breathing difficulty if present.”

The middle of the three boys also has special needs, and Frazier said he has struggled in school.

“They keep asking me why. I keep telling them there’s cruel people in the world,” Garner told The Skanner.

According to the victims’ mother, two different auto shops looked at her car and said it would be less expensive to replace it than to replace the upholstery, seats and air filter.

Ryan Masury, owner/operator of Westside Detailing, told The Skanner he would be wary of taking on a repair job involving pepper spray discharged inside a car, and that it would require a complete overhaul of the interior, and he would likely pass on such a job because of the potential liability involved.

“That would be something that if someone called me about, I would suggest replacing a new seat, a new door panel, just because the risk would be way too much. If you pulled out the car seat,” Ryan Masury, told The Skanner News.

The bulk of funds from the online fundraiser will be used to replace the family car, but also for medical expenses like copays, as well as food for the family.

“When you have trauma like this, everything ends up costing money,” said neighbor Laurel Carrasco, adding that if additional funds are raised they will go toward counseling and mentoring services for the young men.

“These are some of the shyest, sweetest children,” Carrasco said.

The Portland Police Bureau has requested that anyone with information about this incident or the identity of the suspect is asked to contact Detective Jeff Sharp at (503) 823-9773, jeff.sharp@portlandoregon.gov. Portland Police Bureau’s press release describes the suspect as a White or Hispanic man in his mid-20s, 5’9” tall, 160 pounds, wearing spandex bicycle clothing and a gray and Black helmet. He was riding a road bike with a white box on the back of the bicycle, which fell off and was later turned over to police. It contained tools but no identifying information. Family members also told The Skanner the attacker wore dark shoes with a bright green stripe.

The Cycling Against Hate ride will leave at 2 p.m. Sunday from the intersection of Northeast 9th and Killingsworth. More than 700 people have been invited and more than 50 people have signed up on the event’s Facebook page.

Editor's note: This story has been corrected from an earlier version.