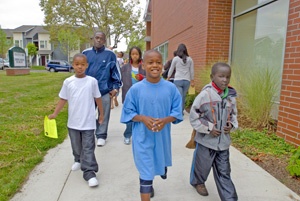 On Wednesday, hundreds of fathers, grandfathers and uncles dished out breakfast, packed lunches and took children to school to begin the first day of classes. The Million Father March, an African American led initiative that continues all of this week, aims to encourage more men to get involved in their children's education.
"It's saying something to all fathers," said Charles McGee, president and CEO of the nonprofit Black Parent Initiative. "We want all men to be engaged. We want Black men to be more invested in the education of their children."
Set up about a year ago, the Black Parent Initiative is based on the philosophy that strong families are the key to ending the education achievement gap that shows African American and Latino students points behind White students when it comes to test scores. The idea behind the march is that Black fathers -- or father figures -- can have a strong influence on academic success.
Ron Williams, lead organizer for the initiative, said that Wednesday's event will kick off the organization's official "unveiling" Although the initiative has been around for about a year now - it promoted the Million Father March in 2006 - it has kept a low profile, quietly building support behind the scenes.
There is plenty of evidence that says parents can help raise achievement. Research shows, for example, that children whose fathers take active roles in their educational lives earn better grades, get better test scores, enjoy school more and are more likely to graduate from high school and attend college.
McGee said African American parents have to change their approach in order to get results. "We have to take ownership of our children's education if we're expecting their achievement," he said. "This is our system as well."
"The term 'engagement' says that it's not our system, when in actuality Jefferson (and other schools) belong to the community.
Now, funded by Concordia University, Portland Public Schools, the city of Portland and the Metropolitan Alliance for the Common Good, the Black Parent Initiative is building relationships with church leaders and their congregations - 11 churches so far -- in order to get parents, especially fathers, engaged in their children's education. BPI is also providing leadership and political training to parents on how to change school policies that welcome parental involvement.
"Parents don't feel welcome in schools," Williams said. "The school system wants to dictate what parental involvement looks like. That creates tension. When parents feel tension, they back off."
The initiative will offer parent leadership training designed to develop a network of parent leaders all committed to supporting academic success for their own - and the community's children. In addition, upper-level students from Concordia University will offer academic tutoring at church sites.
Initiative leaders also want to see political action to address the achievement gap. McGee, 22, ran for the Portland Public School Board in 2006. A founding member of the Black Parent Initiative, Johnell Bell, works for County Chair Ted Wheeler. And board member Lolenzo Poe is Wheeler's senior policy analyst.
Hoping to turn the Million Father March into the first of many regular events for the organization - a prayer breakfast and quarterly gatherings are also part of the program - Williams and McGee see hope for the future. After all, Williams, who is 50, believes that lack of parental involvement is a relatively new problem, one that can be reversed. After his mother's death, Williams -- along with his nine brothers and sisters -- was raised by his father. At that time, he said, the vast majority of his friends also had a father figure at home.
"By making it a public demonstration of male role models … we are taking ownership of the issue," he said.
To reach the Black Parent Initiative call 503-493-9721 or email Ron Williams at [email protected]