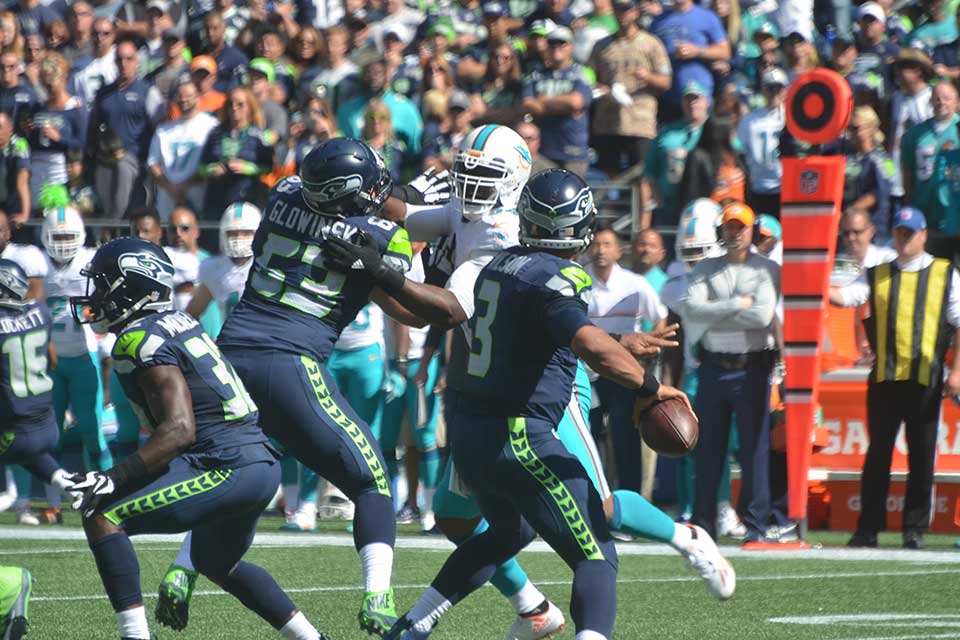 The 2016 Seattle Seahawks season kicked off on a sunny Sunday afternoon against the Miami Dolphins at CenturyLink Field as the Seahawks won their eight consecutive home opener, 12-10, in front of 69,010 riled up fans.

On the fifteenth anniversary of 9/11, the Seahawks and NFL did a great job of honoring the victims of the September 11th attacks with pregame festivities including a large unveiling of the American flag by various members of the military and a flyover from a military jet. While the National Anthem played, the Seahawks along with coach Pete Carroll, linked arms and took a unity stand to bring awareness to social injustice across this nation while several members of the Dolphins took a knee on the field.

Last season the team was known for their slow starts and then getting rhythm going in the second half and it seemed this first game of the season was no different. While the Hawks offense struggled the defense stepped it up holding Miami to just one touchdown, 64 passing yards and sacked Dolphin quarterback Ryan Tannehill four times for 28 yards and a blocked field goal by DE Cassius Marsh.

DE Cliff Avril links arms with other Seahawks and coaches during the National Anthem as part of their unity protest. Photo by Monica Foster

Doug Baldwin and Russell Wilson celebrate after connecting on a 2-yard touchdown pass to win the game at the end of the fourth quarter. Photo by Monica Foster

“The defense played light outs, all day long, “ Carroll said. “They did a great job, had a couple sudden-change situations and a big fourth-down stop. I thought our pass rush was really on it today for the most part. We had a couple breakdowns and in the coverage we kept them in front of us like we wanted to.”

Late in the fourth quarter with the Hawks down by four, Wilson and the offense put together a 14-play, 75-yard drive which allowed Wilson to connect to wide receiver Doug Baldwin who found his way open on a 2-yard touchdown pass with just 31 seconds left in the game.

“Wilson has never changed that play before,” Baldwin said. “In that moment I’m thinking, ‘What is he doing?’ but he has shown propensity to miraculous things, and that play was no different. He put us in the best possible position, my hat’s off to him. I have to give him a lot of credit because he wouldn’t have done that in the past.”

Wilson connected with Baldwin for 9 of 11 for 92 yards. In just his short NFL career, Wilson has lead 19 fourth quarter comebacks or overtime wins and he finished the game 43 of 27 for 258 yards.

In the third quarter Wilson suffered an ankle injury when Miami’s defensive tackle Ndamukong Suh sacked him and stepped on his right ankle it but Wilson said he will be ready to play this Sunday.

“I’ll be alright. I’ll be ready to roll.” Wilson said.” Known for his high tolerance for pain, he has never missed a game during his four-year career or missed an in-season practice. After the game in the post game press conference, he was walking without a boot which is optimistic as the Seahawks will continue to monitor Wilson’s ankle this week.

Up next, the Seahawks will take on the recently relocated former St. Louis Rams in their new home in Los Angeles, California.