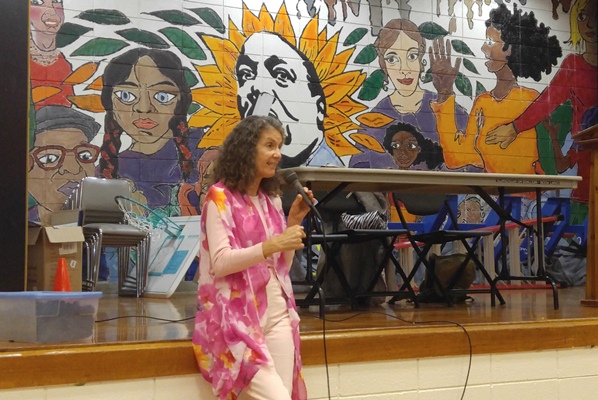 Portland City Commissioner Amanda Fritz wants to bring back publicly-financed elections through a new campaign funding system. Under the proposal, small donations would be matched six times -- amplifying the contributions of average voters.

Fritz held a forum on the plan last Thursday in the Matt Dishman Community Center auditorium. She opened her remarks with a call to action to increase diversity in the Portland City Council.

Under the proposed plan, every donation from $5 to $50 would be matched by public funds at six to one rate -- a $50 donation would effectively turn into a $350 contribution. Money to match donations comes out of the City of Portland general fund. To participate, candidates opt into the matching funds program and then commit to not accept any donations over $250.

Before receiving these funds, city commissioner candidates will have to have collected $2,500 from 250 individuals. Mayoral candidates need to have $5,000 collected from 500 people.

Fritz said that she hopes to have the proposal in front of city council for a vote before the end of the year.

This would be the second time the City of Portland has publicly-financed elections. In 2005, the council voted for a program that would give a lump sum to council candidates who had collected 1,000 signatures and $5 donations.

In 2006, council hopeful Emilie Boyles defrauded the program, violating election laws with falsified signatures and inappropriate spending -- including a $15,000 payment to her daughter. Still reeling from the recession in 2010, Portland voters decided not to ratify the program.

The new proposal is based on the New York City Campaign Finance program that matched the first $175 donation at a six-to-one ratio. It was established in 1988 and radically changed the face of campaign financing over the last 28 years.

City council politicians who elected to use publicly funded campaigns visited more than 90 percent of the census blocks in the city. State senators who do not benefit from the donation match visit 30 percent of these blocks -- concentrating on wealthier districts.

Disenfranchised voters were more likely to donate in races that matched funds. A study by the New York University School of Law found that voters in poor and predominately Black Bedford-Stuyvesant neighborhood in Brooklyn gave 24 times more donations to city council elections than to state Senate campaigns.

“We see the empowerment of small donors, average individuals,” Nieves said. “Because small donors now know that they can trust that the candidate who participates in this program -- they are held accountable to many small donors.”

According to Nieves, it takes about $1 million to run for Mayor of Portland. She said in the last election 600 large donors gave a total of $1.7 million and another 6,000 smaller donors raised $570,000.

Kayse Jama, the executive director of Unite Oregon, asked how many people in the crowd could raise $600,000 to $1 million to run in the city council or mayoral races. Only two people out of room of 100 said they could.

Jama said the average Portlander wants to be more involved in civics and taking big money out of the system would improve voter participation. Jama challenged the city to make good on its progressive reputation.

“We are known to be a city that is really innovative and we have progressive cutting-edge policies to put forward,” Jama said. “We need to do that in order to live up to our expectations of our community.”

Chloe Eudaly, who faces Commissioner Steve Novick in a run-off election for the Portland City Commission seat this November, testified at the forum.  She spoke about the difficulties of raising money to unseat an incumbent and how donors are hesitant to contribute to a challenger.

The publicly funded campaign financing would be a game-changer for candidates like Eudaly, who has raised more than $40,000 dollars from 300 donors -- many of whom come from modest backgrounds. She said if the plan was available to her today, she would have had $200,000 to run her campaign.

Eudaly said this expensive campaign process is the reason why privileged candidates are over-represented in city council history.

“When you are focused on the people who can afford to give large campaign contributions, you lose sight of the people who can’t,” Eudaly said. “And when it talks half a million dollars to be competitive, worthy candidates are effectively excluded from running and serving.”

Fritz encouraged people to email their thoughts and concerns to the other members of the city council. There is also a petition circulating to support the campaign finance proposal that can be found here.