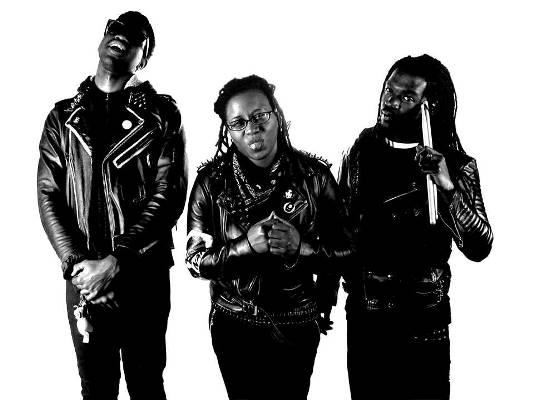 Last fall a small group of organizers decided to put together a Portland arts festival focused specifically on work by people of color. Now that festival is entering its second year.

IntersectFest – a festival of art, self-publishing and do-it-yourself and punk culture, organized by people of color – kicks off Thursday with a dance circle and an inter-tribal art and film festival at Ford Food & Drink in southeast Portland. The festival continues through Sunday with events ranging from a Friday comedy show at Ford Food and Drink, and hip-hip and punk shows. The latter will be headlined by Breathing Light, an all-Black punk band from Chicago who, according to organizer Anna Vo, will be traveling to Portland on Greyhound buses after taking time off from their day jobs for the event.

For more information, including a complete schedule, check out the event's Facebook page.

The Skanner News spoke with organizer Anna Vo about the origins of the event and what makes this year different. This interview has been edited for space and clarity.

The Skanner News: Tell me a little bit about how the event came about, how it got started.

Anna Vo: Last year the event was a little bit more specific. It started with the idea that Portland is viewed as a very White-dominated city, even though that’s not demographically true in a lot of neighborhoods. Last year’s event was sort of specifically in the North Albina, North Killingsworth where it’s actually POC-dominated anyway, the neighborhoods. We invited lots of nonprofits and neighborhood organizations to table and come and meet with other people, network with other people. It was a three-day event with workshops and music and lots of awesome stuff. The idea was to remind people that visibility is defined by media and defined by perception. If you consider the narrative of the invisibility of people of color, then people start to believe that even though that’s not quite true.

TSN: You said last year’s event had a more specific focus. What are you doing this year that’s different?

AV: Last year was very radical left, kind of specific politics. This year we wanted to make it more broad and kind of introduce issues of class as well. One of the things to address that was to have two days of events in downtown at P:Ear, where downtown Portland is a specific example of class issues intersecting with race issues, specifically with homelessness. That event is free and open to everybody so the idea is that it’s accessible to houseless folks as well. I think often they get marginalized and excluded from public events. It’s making it geographically different and more central – two days in downtown and two days in southeast, southeast being a very specifically and predominantly White kind of culture.

We opened [the festival] to more local creative groups who wanted to be involved, so traditionally art forms that were popular with persons of color, like spoken word, standup comedy and modern dance. We have events around that, and we have a two-day art exhibition, which we didn’t have last year as well. So it’s just a wider scope of cultural activity.

TSN: Who’s been involved in putting this together?

AV: Just a collection of individuals that said they would be interested in doing this, and organizations. There’s no affiliations with any groups or anything. We did the open call several times to invite whoever wanted to come and help organize.

TSN: Is there anything else that our readers should know in particular about this event?

AV: We want to reiterate that it’s everything that is created and organized is always a collective responsibility and a collective effort. Part of that is just showing up for your friends and showing up as a good ally. There’s lots of performers of color and everyone has their really individual human story and I hope they all get honored and listened to.

TSN: A lot of times in conversations about gentrification, there’s this tendency to put people of color in one category and artists in another category – and the assumption is that artists are White. The assumption that creatives are White leaves a whole lot of people out of the conversation.

AV: I would say that’s inherent in a lot of the whitewashing rhetoric inherent in a lot of media or mass media, especially around gentrification and around making certain things cool and specifically about Portland. That’s what I’m trying to say, is that there is this continual narrative that Portland is White and it’s so cool and creative because it’s White, because of these White neighborhoods. The whole intention of this is to erase that narrative, if possible, because it’s absolute BS. I don’t know how else to put it, really.

This is just a really adamant, clear statement. Not all our performers are POC because we have bands that are predominantly POC but they have a couple of White people in them. But we do have lots of performers of color and they were not difficult to find. When people say stuff like, “I try to find [artists and performers of color], but I couldn’t because everyone’s White here," that’s not true. This is proof of that. We’re trying to be extremely visible and loud about that point.