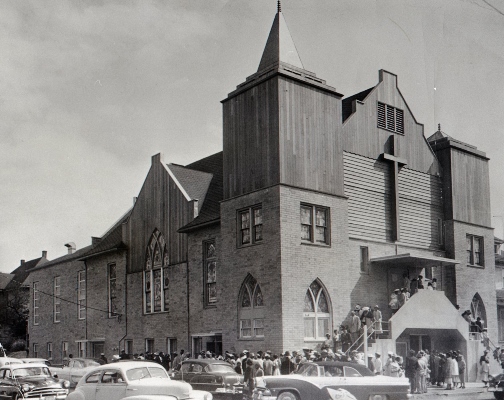 The Vancouver Avenue First Baptist Church learned Tuesday the church had been named to the National Historic Registry.

Oregon Heritage Exchange – a blog maintained by the Oregon State Parks Department – reported Tuesday that the church, which celebrated its 72nd anniversary Sunday with a fundraiser for its annual Drum Major Scholarship Fund, had been added to the registry.

The church was nominated by the State Advisory Committee on Historic Preservation for national landmark status in mid-June.

The church’s longtime home at 3138 N. Vancouver is actually its third location in the Portland area. It was organized in the 1940s when waves of African American settlers, most from the South, moved to Portland to work in the Kaiser shipyards and quickly outgrew its first two buildings – the first in a Vancouver shipyard, the second in another building in the Albina neighborhood -- before settling just south of Fremont in 1951. The building was built in 1909 and had previously housed a Methodist Episcopal congregation. It had a capacity of 600 – which the congregation at the time found inadequate until its renovation in 1957 under the leadership of the Rev. Oliver Booker Williams, to accommodate 200 more people.

During the Civil Rights Movement of the 1950s and 1960s,  Vancouver Avenue First Baptist Church hosted a variety of noted speakers involved in the movement. They included Martin Luther King Jr., who spoke at the church in 1961 during a tour organized by the national Urban League. He  spoke on “The Future of Integration” and described segregation as a “cancer in the body of democracy.” The church also hosted John Lewis and Ralph Wilkins during the peak years of the movement.

The Oregon Heritage Exchange post notes the building stands in an area that was once a hub for African American businesses and has since undergone dramatic redevelopment, new construction and attendant displacement of neighbors – including longtime congregants. However, the congregation -- now led by the Rev. J.W. Matt Hennessee  -- is still considered one of the largest African American congregations in the state.