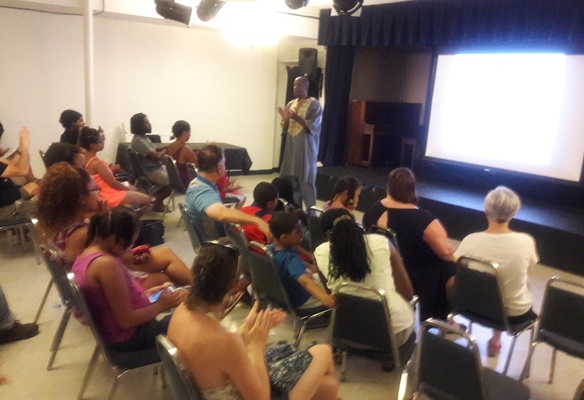 More than 50 parents, educators, children and other community members crowded into the basement of a North Portland church Saturday, traveling in 100-degree heat to learn more about the School of African Roots -- which a coalition of community groups is organizing in order to help Black students succeed in school.

Organizers are concerned about low graduation rates among African American students in Portland Public Schools, and want to help improve the success of students within the system – as well as providing support for families who choose to home school.

A year from now, organizers hope to have a year-round school. But for now, SOAR will offer after-school and weekend programs offering cultural education, tutoring and support at the Abbey Art Center at 7600 N. Hereford in Portland.

Groups including the All African People’s Revolutionary Party, the Black History Legacy Project and the Black United Fund – as well as educational institutions like Portland Community College and Portland State University – are all listed as sponsors of SOAR.

Organizer Ahjamu Umi told the crowd SOAR builds on a centuries-old tradition of Black-focused educational projects – and cited schools created by Marcus Garvey and the Black Panthers as examples.

“We don’t believe education is about getting a degree and making more money. If you’re in school, it’s because people 50 years ago fought and bled for the right for you to be there. No matter how smart you are, you’re born in debt,” Umi said.

In addition to offering programs in Black history, SOAR programs will help students learn to become better students – how to organize their days and materials so they can succeed regardless of the setting.

Last year the Atlantic reported an increase in the number of Black families who choose to home school their children, with more than 220,000 Black children being home schooled. According to the National Home Education Research Institute, Black children make up about 10 percent of children being home schooled, versus 16 percent of children in public schools. Where White families tend to cite religious reasons for choosing to home school, Black families generally point to factors related to racism, including a culture of low expectations for African American students, especially boys, or disproportionate discipline – both of which ultimately contribute to high incarceration rates for African Americans.