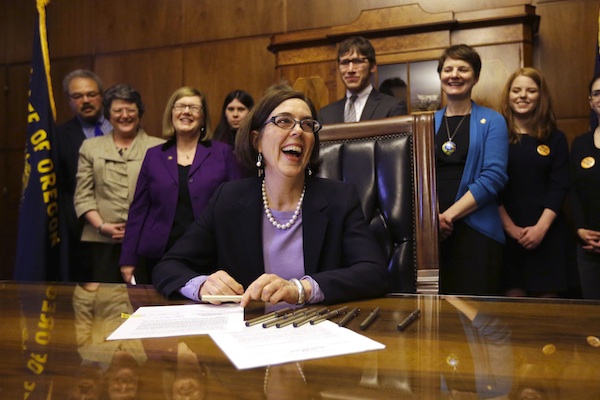 In a statement, Brown said Measure 97, previously known as Initiative Petition 28, or IP 28, would give the state financial stability moving forward and address the "basic unfairness" in Oregon's tax system, which has no sales tax and derives the largest chunk of revenue from personal income taxes.

The measure would raise an estimated $3 billion in additional annual revenue — boosting the state's general fund by more than a quarter — through a tax hike on the largest firms doing business in Oregon.

The extra funds are broadly earmarked for education, health care and senior services, although the measure doesn't say how the money should be spent in those areas.

However, as confirmed this week by the state's legal counsel, the Legislature could spend it however it pleased. That's a major point of contention between labor unions and businesses at a time when Oregon faces a shortfall in its 2017-19 budget and a massive public employee-pension liability next year.

Brown, a Democrat who's running to keep her gubernatorial seat in November, addressed this issue in her endorsement, saying she "will make sure" the funds are spent as voters expect.

"State leaders before me have repeatedly tried and failed to solve the problem of adequate and stable funding for schools and other state services," Brown said. "Every solution has had strengths and weaknesses in terms of fairness and economic impact. None has succeeded in bringing the business community, individual and family taxpayers, service providers, and advocates together."

It diverges somewhat from when Brown publicly broke her silence, although stayed neutral, in early June. That's when she rolled out a broader proposal for the money than outlined in Measure 97, such as expanding earned income tax credits for low-income households and creating tax credits for corporations that donate some of their tax bills to the state's small and minority business fund.

When asked by The Associated Press on Thursday whether her plans had changed, Brown said "my priority right now is to focus on the passage of Measure 97."

The measure targets the largest 1,000 C-corporations, or about 4 percent of market, with at least $25 million in Oregon sales. Those firms would pay a minimum $30,000 tax, plus 2.5 percent on anything above that $25 million-sales threshold.

State economists say that could generate an extra $6 billion in revenue for the next two-year budget cycle, while impacting the overall economy through higher consumer prices, declining population and a loss of 38,000 private-sector jobs over five years — although 18,000 public sector jobs would be added.

Measure 97 is backed by Our Oregon, a nonprofit group funded largely by public-employee unions that are affected by state budget problems.

The campaign applauded Brown's support for boosting funds to various public services, none of which "can happen when Oregon has the lowest corporate tax rate in the country."

House Speaker Tina Kotek had been one of the few, if not the only, high-profile Democratic politicians to publicly support Measure 97.

Ferrioli, who called the governor "a fully owned subsidiary of Big Unions Incorporated" and her endorsement "proves she has been playing 'rope-a-dope' with Oregonians, appearing to deliberate for months on the issue while intending to give her ringing endorsement."

House Minority Leader Mike McLane called the endorsement "the worst kept secret in Salem ... she apparently decided it was time to come clean with Oregon voters. Now let's see how many other Democratic candidates are going to be honest with voters about their support for the largest tax increase in Oregon history."

Defeat The Tax On Oregon Sales, the business community's opposition coalition, has mostly focused its campaign on the measure's potential economic hit. But on Thursday Rebecca Tweed, the opposition's campaign coordinator, said: "Measure 97 would give politicians and bureaucrats a $6 billion dollar raise and a blank check to spend it any way they want. While some politicians may like that idea, we doubt the majority of Oregon taxpayers and voters will."