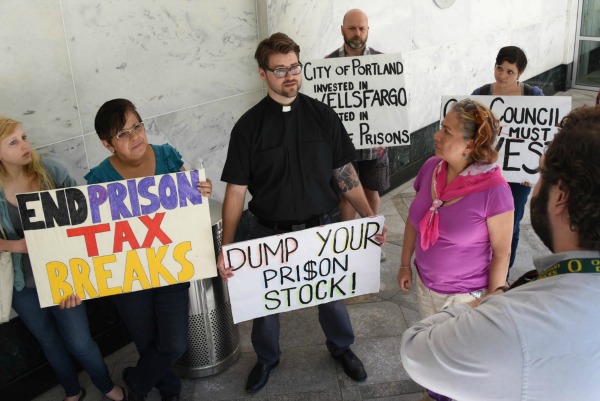 The Ending Tax Breaks for Private Prisons Act of 2016 would overturn an IRS classification that allows the two largest private prison companies, the Corrections Corporation of America and the GEO Group, to operate as Real Estate Investments Trusts (REITs).

Sen Wyden said that these for-profit prison companies are taking advantage of a “broken tax code.”

“As part of rethinking our criminal justice system, particularly as it results in the mass incarceration of low-income and minority individuals, the tax rules for REITs must be changed so we are not encouraging companies to unjustly profit from prison detention services,” Wyden said.

In January of 2013 the Corrections Corporation of America and the GEO Group announced plans to restructure their companies as REITs. These trusts are normally reserved for companies that generate income from real estate -- apartments, warehouses, hotels, shopping centers, etc.

CCA and GEO petitioned the IRS, claiming that their prisons are real estate and their profits constitute real estate income. This change allows these corporations to avoid paying U.S. federal income tax, and requires them to pay at least 90 percent of their taxable income to their shareholders.

According to Enlace, an organization behind the campaign to end these tax breaks, CCA and GEO Group, had a combined reported income of over $3.6 billion in 2015 -- and almost all of that income was tax-free and paid to stockholders.

The legislation introduced by Wyden would reclassify the income as prison operating profits and not real estate profits, which would eliminate the REIT status.

This national movement has roots in Portland. The Enlace alliance started as a bi-national organization founded by low-wage workers in the United States and Mexico to promote racial and economic justice. The group works out of offices in New York, Los Angeles and Portland.

Amanda Aguilar Shank, the senior campaign organizer for Enlace, said that Oregonians are lucky because there are no for-profit prisons operating within the state, but the private prison industry deeply affects the immigrant communities here.

Shank said immigrants who have been picked up by Immigration and Customs Enforcement are most often sent to the NW Detention Center in Tacoma, Wash., a GEO group facility. In 2014, more than 750 immigration detainees went on a hunger strike to protest poor quality food, negligent healthcare and Patriot Act detention policies that allow holding non-citizens for indefinite periods of time.

“There’s a lot of people walking around the streets here in Portland and a lot of people in our organizations that have been sent up there, both Latino and Black immigrants,” Shank said.

Another way that the private prison industry affects Oregon is the lobbying for increased incarceration rates in all states. The push for mandatory minimum sentences was heavily lobbied for by the industry, according to Shank.

“Their role in shaping overall incarceration policy in the last couple of decades has come home even if they are not actively incarcerating within the borders here in Oregon,” Shank said.

Enlace started the campaign to revoke these tax breaks in 2015.  The group has also been advocating for prison divestment both locally and nationally for the last five years. Divestment would call on people, companies and governments to get rid of investments that are considered unethical.

Locally the Portland Prison Divestment Coalition has been pushing for the City of Portland to divest investments in Wells Fargo and the Bank of New York Mellon, since both invest in the private prison industry. A 2012 report by the Public Accountability Initiative in partnership with the National People’s Action group listed Wells Fargo as a major lender to CCA and a major investor in GEO.

Shank said these recommendations will go to the city council for a vote in October. If approved, it would be a groundbreaking stance against the private prison industry.

“That would make Portland the first city in the country to divest from private prisons,” Shank said.