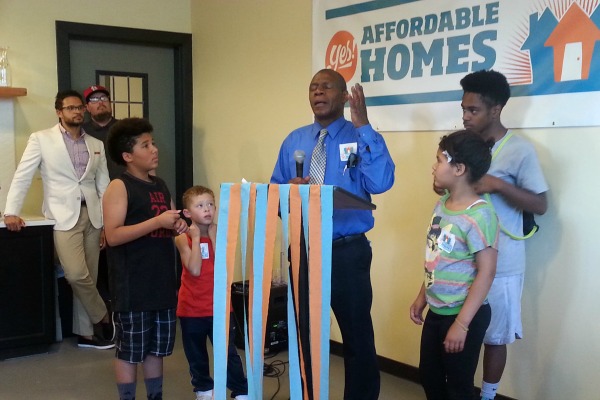 This November, Portland residents will vote on new tax measure to pay for affordable housing. The $258.4 million bond would allow the city of Portland to either build or purchase 1,300 rental units to house those who are being priced out of the local housing market.

Last Thursday, the Portland City Council unanimously voted to send this tax measure to the voters for the November 8 ballot.

The city council chamber was packed to capacity and overflowing into the third story balcony.

Maggie Tallmadge, Environmental Justice Manager at the Coalition of Communities of Color, talked about the disproportionate impact of housing on communities of color, who are more likely to experience homelessness, cost-burdened households and displacement.

“Our communities are steadily pushed to the fringes of cities, increasingly segregated, away from community, away from jobs and services and existing widespread disparities are exacerbated,” Tallmadge said. “Increasingly, African American and Native American households are leaving the city entirely.”

In her remarks, Tallmadge referred to the 2015 State of Housing in Portland report which stated that the average Black family looking for a one-bedroom apartment or larger was priced out every neighborhood in Portland. Homeownership, without paying more than 30 percent of pretax income on housing, was also out of reach for most Black families.

The 600 units for very low-income Portland residents would meet a fraction of the need. The city estimates there is a deficit of 24,000 homes and apartments for this income bracket.

A family of four looking for a three-bedroom apartment would be able to afford paying $573 in rent before being cost-burdened, according to the Portland Housing Bureau -- a task that is impossible in the Portland rental market.

Not everyone who testified at city council was happy with the bond proposal. Fourth-generation Portland resident Terry Parker testified the bond would raise housing costs for everyone in the city, from homeowners to landlords who would pass the costs on to their renters.

Parker was the most concerned about senior citizens who live on fixed social security payments and are in danger of losing their homes due to tax burdens.

“(The affordable housing tax) not only takes from the wealthy, but it also takes from senior citizens on fixed incomes, single parents with kids and anybody else just getting by from paycheck to paycheck,” he said.

After the city council session, the Yes for Affordable Homes campaign held a celebration and rally at the Buckman Coffee Factory in SE Portland. The packed event space held politicians such as the housing bureau director Dan Saltzman, members of the faith community and advocates from the housing and homeless non-profits.

“The truth is that when Oregon is sick and when there is an issue like we are facing today, communities of color get pneumonia, get cancer and are often the ones who pay the deepest price,” Santos-Lyons said.

Santos-Lyons said these groups need to be involved and engaged in the campaign. He said that 60 organizers of color have met with campaign officials representing the needs of African American, immigrant, Asian, Slavic communities and more.

The most profound testimony came from Richard Edwards, who had also spoken earlier that day at the city council session. Edwards spoke of his family’s fall into homelessness after his landlord foreclosed on the house he was renting.

He and his is family tried to navigate homeless services, but they could not find shelter for the whole family. They lived out of their car, sleeping in parking lots and storage units. Their lives were in a freefall until they found housing through Home Forward, Portland’s housing authority.

Edwards’ eyes began to tear when he described finally finding safe housing and being able to live a stable life.

“I am so happy that this is happened to my family, but I also feel guilty because there are other families out there,” Edwards said as he pledged to help pass the November measure.