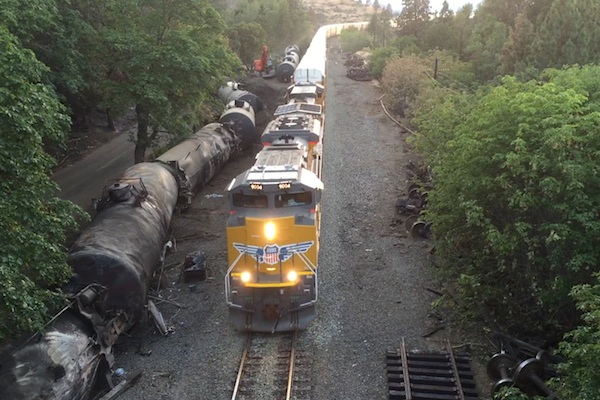 SEATTLE (AP) — Two companies proposing to build what would be the nation's largest oil-by-rail marine terminal along the Columbia River in Washington see it as an opportunity to link domestic crude oil from the Midwest to a West Coast port.

Critics, however, see an environmental and safety catastrophe waiting to happen, especially after a train carrying volatile Bakken crude oil derailed and burned on June 3 in Mosier, Oregon, just 70 miles upriver from the project site in Vancouver, Washington.

The battle over the Tesoro Savage Vancouver Energy terminal — which would handle about 360,000 barrels of crude oil a day — unfolds Monday when the parties make their case for or against the terminal before a state energy panel.

The Energy Facility Site Evaluation Council will hear testimony from dozens of experts and other witnesses over five weeks. It will make a recommendation to Gov. Jay Inslee, who has the final say.

Vancouver Energy is expected to argue that the terminal is needed to meet fuel needs; that it satisfies the council's criteria; that risks of oil spills or accidents at the facility are remote; and it adds economic benefits to the region.

The Port of Vancouver also plans to testify in support, saying the facility is designed to be as safe as possible, there's need for it and it's suitable for the industrial site.

They'll face a chorus of opposition. Tribes, environmental and community groups, the city of Vancouver and a Washington state agency will urge the panel not to recommend approval.

They plan to show that it poses too great a risk to people and the environment, the dangers extend well beyond the facility to include communities along rail lines across the state, and it's not in the public's interest.

Tesoro Corp. and Savage Cos. are proposing a $210 million terminal that would receive an average of four 1½-mile long crude oil trains a day, likely traveling on tracks between Spokane and Vancouver. Oil would temporarily be stored on site and then loaded onto tankers and ships bound for West Coast refineries.

"This is too risky for the state of Washington," said Kristen Boyles, an attorney with Earthjustice representing Columbia Riverkeeper, Climate Solutions and six other groups who intervened in the proceedings to oppose the project.

Oil trains return to Oregon side of the Columbia Gorge

On the Oregon side of the Columbia Gorge, Union Pacific announced plans to resume operations at some point this week. The June 3 derailment of one of its trains caused a 42,000-gallon oil spill and subsequent fire. Nobody was hurt, but it forced evacuations and disruptions to water systems in Mosier, Oregon, a small town about 70 miles east of Portland.

The rail company's announcement comes as local officials plead with the federal government to halt the use of railroads to transport crude oil, a practice they say can never be completely safe for communities in the trains' path.

Oregon Sens. Jeff Merkley and Ron Wyden, who urged the Federal Railroad Administration in a letter Wednesday afternoon to exercise its emergency moratorium authority before Union Pacific resumes in the Gorge.

"Unit trains travel on tracks that pass through and near many small towns that are not well-equipped to deal with the type of fire that occurred in Mosier," Merkley and Wyden wrote to the administration.

Union Pacific officials have concluded that faulty "lag bolts" — fasteners used to attach the rail to the rail tie on a curved section of track — caused the problem in Mosier. Federal rail authorities are also investigating the cause.

The company defended its decision to restart operations in a statement, reiterating the federal obligations it's under and highlighting the tiny fraction of its Oregon shipments — less than 1 percent — that come from oil trains.

"Railroads provide the infrastructure, flexible networks and efficiency needed to move crude oil from locations where oil is recovered to customer facilities," said Wes Lujan, a public affairs vice president for Union Pacific. "The federal common carrier obligation requires railroads to transport crude oil and other hazardous materials. If a customer delivers a crude oil tank car in conformity with U.S. Department of Transportation requirements, we are obligated to transport the rail car to its destination."

Also on Wednesday, Union Pacific announced that another train spilled 1,500 gallons of diesel fuel the night before near Troutdale, Oregon, roughly 20 miles east of Portland.

Leaders at the Oregon Department of Transportation, Multnomah County and several municipalities including Portland and Mosier have called on Congress and the White House for bans on oil being moved by rail, which is under the federal government's authority.

Reacting to Union Pacific's plans, Oregon Gov. Kate Brown reiterated her previous call for a federal moratorium on transporting oil on trains until the system is unquestionably safe.

"Federal agencies and policymakers in Washington, D.C., will continue to put people and ecosystems at risk as they postpone implementation of reasonable safety measures that protect us unless we demand accountability," Brown said in a statement.

Gov. Jay Inslee of Washington state, where a different rail company operates along the Columbia River, has held similar discussions with federal leaders in recent weeks, although he's stopped short of requesting a moratorium.

Rebecca Ponzio, spokeswoman for the Stand Up To Oil advocacy group, blasted Union Pacific in a statement, saying the company has shown a "reckless disregard" for communities, ignored officials' pleas and, "proceeded on with what matters most to them: the bottom line."

In briefs filed ahead of Monday's hearing, the cities of Vancouver and Spokane, among others, say they're concerned about the risk of oil spills and accidents as more trains cut through their communities. They question whether emergency responders would be able to handle a large fire from a derailment.

"Tesoro's proposal constitutes a clear and present threat to human life and health," Vancouver city attorneys wrote. The council "simply has no ability to ensure the safety of Vancouver's citizens while the equivalent of 1,667 tanker trucks of volatile crude oil per day move into and out of the heart of the fourth largest city in Washington."

In a separate brief, the state-appointed attorney who represents the public's interest in protecting the environment writes that oil trains moving across the state and close to or on the Columbia River "presents a continuing risk of significant environmental impacts and harm."

The consequences of the worse-case oil spill would affect the Columbia River for years to come and cause losses to salmon, birds and other natural resources, assistant attorney general Matthew Kernutt wrote.

The Yakama Nation and the Confederated Tribes of the Umatilla Indian Reservation also plan to show that the project interferes with their treaty-reserved fishing rights and that a potential oil spill could have devastating consequences to salmon and other natural resources on which the tribe depends.

The Washington Department of Natural Resources is also urging the council to reject the project, citing risks of blazes from increased train traffic and other concerns.

Vancouver Energy says the project can be done safely and will provide jobs and tax revenue as well as reduce dependency on foreign oil.

Vancouver Energy General Manager Jared Larrabee said the terminal has committed to only accept tank cars that meet or exceed DOT-117 standards, has purchased and placed oil spill response equipment along the rail corridor and taken other safety measures.