After Massacre, Portland Prepares for Pride 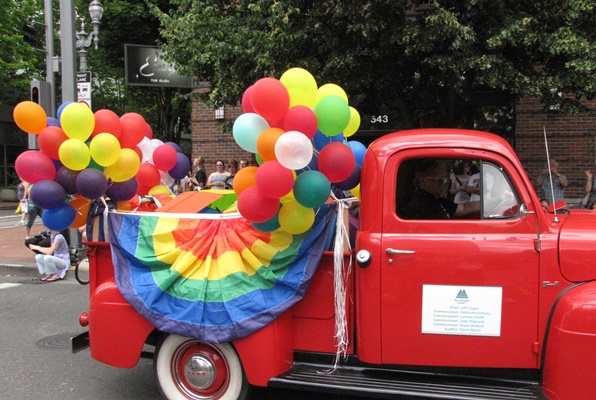 Portland Pride, the week-long celebration of lesbian, gay, bisexual, trans and queer people and a call for civil rights, begins this week.

Most years  Pride is a positive celebration for queer communities and their allies -- but this year the celebration is shadowed by the tragic massacre at an Orlando nightclub Sunday.

In the early morning hours of June 12, Omar Mateen  opened fire inside Pulse, an LGBTQ nightclub celebrating a Latin night. That morning, Mateen murdered 49 people and injured 53 others before being shot and killed by Orlando police officers.

Hours later in Los Angeles, James Wesley Howell was stopped by police, who found an arsenal of weapons and bomb-making chemicals in his car. Howell said he was heading to the Los Angeles Pride celebration.

Authorities do not know if there was a plan to attack the festival and believe there is no connection between the two incidents. The California celebration continued as planned with enhanced security.

Debra Porta, the former board president of Pride Northwest and current board advisor, said the local queer community is reeling from the news of the Pulse Nightclub massacre.

“We are not necessarily always surprised when the community is attacked or when violence happens because there is such a history of it to begin with, but nobody was expecting something on this scale,” Porta said.

In response to the Orlando massacre, Pride Northwest and the Q Center of Portland will hold a candlelight vigil in honor of those who died. The vigil will take place from 7 to 9 p.m. Thursdayat Q Center on N. Mississippi Ave.

There will be beefed up security this year as well. Acting Portland Police Chief Donna Henderson has asked for an increased police presence during Portland Pride Week events.  The Portland Police Bureau will perform extra patrols around LGBTQ-friendly bars and nightclubs.

The Orlando shooting is being investigated as an act of domestic terrorism. The FBI Portland Division issued a statement saying there was “no credible threat” to LGBTQ communities in Oregon, but they urge people to report any suspicious activity to law enforcement.

Porta said Pride NW organizers have been actively working with their security officials and the Portland Police Bureau to provide a safe place to celebrate. She said PPB has been very engaged and proactive at reaching out to the community.

“Pride is typically safe to begin with -- the festival and the parade -- but we are in active communication and planning to ensure that continues to be the case,” Porta said.

Portland Mayor Charlie Hales released a statement Sunday morning asking for the people of Portland to come and show their support of the queer community.

“I'm calling on all Portlanders to hold our LGBTQ community close, and come out in a show of force against terrorizing people because of who they love,” Hales said. On Monday, Hales removed the Oregon state flag from city hall and replaced it with a rainbow flag to honor the victims of Orlando.

Porta said discussions in the community are split between people being worried for their personal safety and wanting to come together to grieve. She said the overwhelming response is from those who want to stand up and defend their right to love freely and openly.