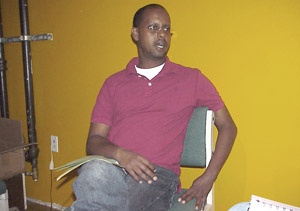 Immigrants arrive in Portland from all over the world. They speak hundreds of different languages and they arrive in the United States for all kinds of reasons. Documented or not – immigrants are as varied as the rest of us.
Critics of immigration make a mistake when they portray immigrants and refugees as a single monotone group that drains community resources and has little to offer in return, said Kayse Jama, director of the Center for Intercultural Organizing. The facts show otherwise.
A Somalian immigrant himself, Jama is working to educate both immigrants and other Portlanders about immigration myths and laws, about the racism that he says poisons the debate and about the reasons why immigrants and refugees are good for America. To do this, Jama has organized a workshop titled, "Refugee
and Immigrant Solidarity Education."
The workshop, which begins on Sept. 24 and is the fourth of its kind this year, and has become a regular six-week series for the center, offering participants a window into the lives of immigrants and refugees and showing how they shape the city, and country, in which we live.
Once people know the facts, their attitude to immigration policy changes, Jama argues, because harsh immigration policies stem from hypocritical and racist attitudes.
Margot Kniffin, the center's PILOT program coordinator, says the workshop isn't trying to convert diehard anti-immigration partisans. They are trying to reach the "people in the middle" – the 80 percent of the population who could be potential allies for the thousands of immigrants in Portland. Teaching this population about the racism that permeates organizations such as the Minutemen – a volunteer, vigilante organization who took it upon themselves to patrol portions of the Southern border armed with guns, walk talkies and binoculars – helps break down the true intentions of individuals who claim to be part of the "law and order" crowd.
At a time in which our congress is deeply divided about how to address the United States' current immigration policy, and anti-immigration sentiment is affecting the way we treat different ethnic groups, it is comforting to know the city's leadership is preaching a message of tolerance and acceptance, says Jama. Following the federal immigration raid in June on the Fresh Del Monte fruit plant in St. Johns, Mayor Tom Potter issued a statement condemning the agent's arrest of more than 160 undocumented workers. Other actions by city officials have also been inclusive of immigrants.
In December 2006, City Council passed a resolution calling for the inclusion of immigrants/refugees into city government and established a task force to determine the needs of that population; and the Office of Neighborhood Involvement is reaching out to these communities to establish more inclusive relationships.
"For so long, Portland ignored the immigrant and refugee community," Jama said. "We were completely being ignored as insignificant."
Part of the focus of the workshops is to expose some racist ideas that affect the anti-immigrant movement. For example, Jama said, immigration is often painted as a Latino problem.
"It's a fact, the majority of (immigrants) are from the Latino community," Jama says. "But to label it as a Latino issue is fundamentally divisive. All immigrants and refugees, regardless of where they come from, feel under attack."
Hilary Clarke, a refugee sponsorship assistant for Multicultural Community Services, said the public attitude toward refugees in recent years has deteriorated, although the actions taken by city government have been encouraging. Contrary to what many people think, the refugee experience and the immigrant experience are very different, she said. Refugees are often fleeing war and lack the means to initially support their families; immigrants often are more self-sufficient and prepared to live in the United States.
Portlanders often meet their first refugees through the churches who sponsor them, or as the neighbors living in the same apartment complex. Getting people to communicate with newly arrived refugees is always important, she said.
"I like to let the tenants know (the refugee family's) history," said Clarke, who is originally from England but has lived in Swaziland, Pakistan and India.
In Beaverton, a recent forum introduced police officers to refugees and refugee advocates. Such positive exchanges allow police to explain to refugees what they expect of them and vice-versa, Clarke said, adding that what Jama and others at the Center for Intercultural Organizing are doing for the immigrant and refugee population is helping that community connect with their new homes.
There are a few seats still left for September's workshop. Anyone interested in signing up can visit www.interculturalorganizing.org/involvement/events.html to register online.