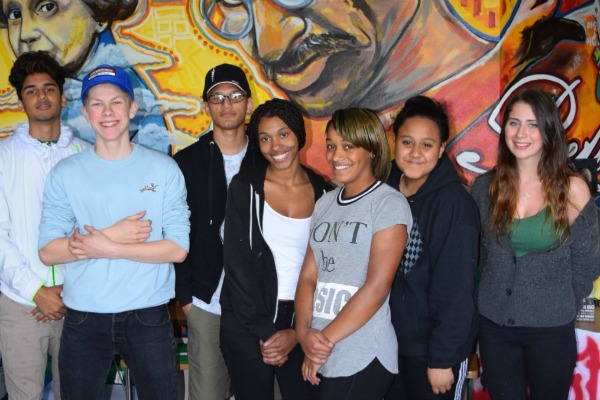 On the evening of Feb. 20, five students from Roosevelt High School say they went to the Nordstrom Rack in downtown Portland. These Black teens were followed around the store and then falsely accused of stealing before being asked to leave.

For them, the story could have ended there -- just another incidence of racial profiling and “shopping while Black.”

Instead, one of the teens brought this experience to his journalism class to bring more exposure to the daily prejudices Black teen shoppers endure.

The Roosevelt High School Urban Griots produced a video about racial profiling after surveying more than 100 students about their experiences. Since posting the video on Facebook, it has been viewed more than 22,000 times and has been shared by more than 600 people. The project also created a social media campaign with the hashtag #teens4socialjustice.

The Skanner News went to Roosevelt High School to talk to the team of students who produced the film. The Urban Griots are taught by the writing teacher and poet S. Renee Mitchell. The word "griot" is a West African phrase referring to the travelling writers, poets and musicians who are the keepers of oral tradition stories.

In the film, students of color spoke about being followed around by security guards who watched their every move. Some students spoke of feeling unwelcome and ashamed by the treatment. Other students told the filmmakers their bags were searched before being kicked out of the store. Watch the video below:

Emmerson Donnell, a 17-year-old junior who helped produce the video, said it was an eye-opening experience and he was surprised at how many people watched the film.

“I was surprised at how the video spread. I didn’t expect it, and I don’t think many people in here did expect that,” Donnell said.

For Jordan Harris, a 16-year-old Junior, the film was a way to bring together people who had been racially profiled and give them an opportunity to speak about it. Through these interviews, people felt less alone as they shared their experiences with others who had gone through the same thing, according to Harris.

“I think we kind of opened the door a little bit for people to talk about something that’s kind of uncomfortable to talk about,” he said. “And now that… gets people working to try to change this.”

Mitchell said the students’ film and subsequent media coverage are part of the lesson for the mass communication class. She said the goal was to support a student-led effort to conceive, produce and stand behind a project that was important to them.

Mitchell said it was an opportunity to show the students that people believe in their voices and that they should feel welcome in the media industry.

“That’s pretty incredible, that something that could have been small and insignificant has really seeded something that has been empowering for a whole lot of people,” Mitchell said.

Some of the students said the video has given them new direction and focus. Junior Joti Mangat and Donnell both said they had worked in media before but the project gave them confidence to produce their own work.

Harris had considered pursuing journalism as a career before enrolling in the urban griots class and the experience with the racial profiling project has strengthened that interest.

“Since coming into it and doing these projects, getting the kind of exposure that we have had… now I am really thinking about having a career in a journalistic field,” Harris said.

The students are also considering pushing for a Shopper’s Bill of Rights like the one put forth by a coalition of civil rights leaders and high-end retailers in New York City in 2013. That policy said store employees who racially profile customers could be disciplined or fired and that shoppers suspected of shoplifting needed to have their civil rights supported.