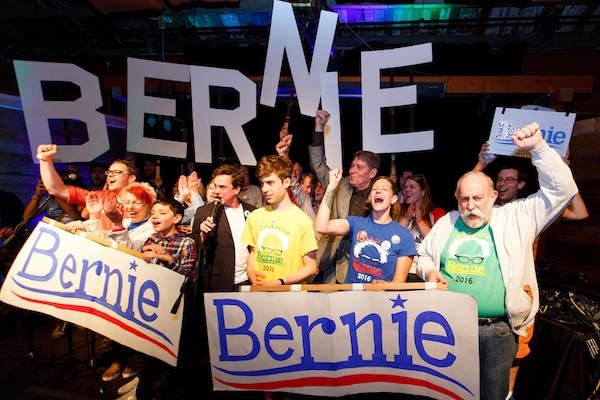 SALEM, Oregon (AP) — After Bernie Sanders won Oregon's Democratic primary this week, two superdelegates announced they'll back the Vermont senator and one declared support for Hillary Clinton, amid increased discomfort with a system viewed as undemocratic, even among some of the superdelegates themselves.

The issue is particularly critical in this election, because even though Sanders beat Clinton by nearly 10 percentage points in the primary, the former secretary of state could still amass most of the Oregon delegates if a certain number of the 13 superdelegates, a nickname for unpledged delegates, swing her way. The odds of this happening are very remote, though it is mathematically possible.

"Every Democrat I have talked to finds the unpledged delegate system offensive," superdelegate Larry Taylor said in a telephone interview with The Associated Press. He became a superdelegate because of his position in the Democratic party in Oregon, but that doesn't mean he agrees with the system.

After Tuesday's primary results came in, Taylor announced he would support Sanders, one of only three superdelegates to do so, with Sen. Jeff Merkley having endorsed Sanders before the primary. Seven have declared they back Clinton. Three remain undeclared.

"I don't think my vote ... should invalidate the vote of thousands of voters," Taylor said. Each delegate vote on the floor of the Democratic convention in July will represent about 8,500 Democrats who voted in the Oregon primary, he noted. He was speaking to AP from Philadelphia, where he and other party officials from Oregon were visiting the convention facilities.

If all three undeclared superdelegates go for Clinton, the result would be 37-35, a squeaker for Sanders. That is, if the superdelegates don't change their minds, which they are all entitled to do.

U.S. Rep Peter DeFazio, D-Oregon, is unhappy with this system. DeFazio, a superdelegate by virtue of his position as a congressman, is staying out of the fray for now.

"Generally, I do not weigh in on contested primaries, and as long as the race for the Democratic nomination continues, I have no plans to do otherwise," DeFazio said in a statement Wednesday.

He was blunt about his feelings about the superdelegate system, implemented by the Democratic National Committee before the 1984 election to prevent candidates with little chance of winning the presidential election from being chosen as the party's nominee.

"I find the role of superdelegates undemocratic and they should not be a part of the nominating system," DeFazio said. "Instead, I would prefer to let the voters determine the results of presidential primary."

But superdelegate Karen Packer, who said she came out for Clinton Tuesday night at her campaign headquarters in Portland, makes no bones about her choice.

"I've been a Hillary supporter all along," Packer told the AP from Philadelphia. "I was an Obama delegate in 2008 and 2012. In my mind its Hillary's turn."

She said the system adds value and aims to unify the party behind the best candidate.

"We are charged with supporting the candidate that we feel is best prepared and best qualified to win the presidency in November and run the country," she added. "There's no question in my mind that she fills that description far better than her opponent."

Superdelegate Lupita Maurer came out for Sanders after his win on Tuesday, and was delighted to do so.

"I believe I have to represent the majority of voters in Oregon, and so I will vote for him at the convention," she told AP Wednesday.

Maurer, who has dual US-Mexican citizenship, added: "I am from Mexico City, and to me he has done an outstanding job of standing up for the Latino community."

However, she is not a fan of the superdelegate system.

"It's outdated," she said. "We should just get rid of the delegate system completely."
___
Follow Andrew Selsky on Twitter @andrewselsky