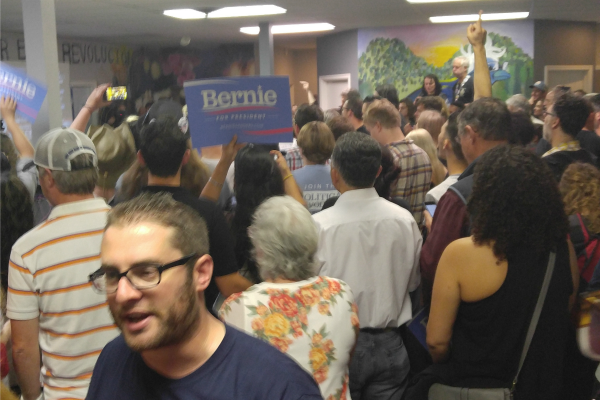 A steady stream of cars drove southbound on SE  11th Avenue Tuesday to drop off their ballots for the May primary election before the 8 p.m. deadline.

On the sidewalk outside the Multnomah County Elections Office, people walked, biked and took the bus to get last-minute ballots.

The results of the primary election determined Oregon’s choice for the Democratic presidential nominee, choosing between the current front-runner Hillary Clinton and the progressive underdog Bernie Sanders -- along with party nominations for the state gubernatorial race.

Sanders ended up winning 55.5 percent of the vote in Oregon to Clinton’s 42.8 percent, where 64 percent of the state’s Republican voters cast their votes for presumed nominee Donald Trump. See more results on this page.

The Skanner News visited the election drop site to ask voters why they were voting and what issues were the most important to them.

An overwhelming number of voters said they came out to vote for Bernie Sanders. Musician Stevie Pohlman of the band Mope Grooves said that he voted “Because I want Bernie Sanders to win.”

Another Sanders supporter said he was worried that Sanders was going to be discounted before the people in the state of Oregon were able to give him a chance. “I am hoping that if he wins Oregon, we can push him through,” he said.

A few voters for Sanders said that he had inspired them to become more engaged. Vanessa Kinyon pushed a stroller with her infant daughter up to the elections office. She said health care was her most important issue after she had health complications during her last pregnancy. Kinyon said she had to juggle three different health insurance providers and pay three different deductibles to receive treatment.

Kinyon was so inspired by Bernie Sanders’ promise of single-payer health care that she volunteered for a candidate for the first time in her life.

“I’ve never been political ever in my life, never ever. I’ve never cared, I’ve never been engaged,” Kinyon said, but she wanted to rally for Sanders. “I’ve made phone calls for him and I canvassed and I went to his rallies. I wish I would have done more, but I have two little kids.”

Similarly, the 26-year-old writer and musician Fields Puckett IV said that he switched his party affiliation to Democratic and voted for the first time in any election. Puckett felt like his voice was important in this election.

“I didn’t participate in the political process before,” he said. “I was for Obama, but I thought they had it taken care of, and I didn’t think it was radical enough to really need me. But I feel like he really needed us.”

Not everyone was most concerned with the democratic presidential election. Transportation planner Sumi Malik said she voted to support the 10-cent gas tax to fund road repairs.

“I think it’s a user-based fee and it makes sense. We have a lot of deferred maintenance and deferred transportation needs and I would like to see those addressed,” Malik said. She also wanted to vote to support city commissioner Steve Novick because she believes he has been doing a good job.

Many people talked about the importance of voting to be civically engaged. One respondent answered the question of why he voted with the deadpan retort, “I always vote.”

Coworkers Jeromy Maligie and Cameron Knight from the 3D Visualization company, Spaceview, Inc., both said that voting was an integral part of citizenship. Maligie said that it was important to vote in all elections. Knight said voting was meaningful to him because he immigrated here from Canada. He also said this election was a chance to vote against crooked politics.

“I am very anti-corruption, so I am trying to make a voice against corruption,” Knight said.