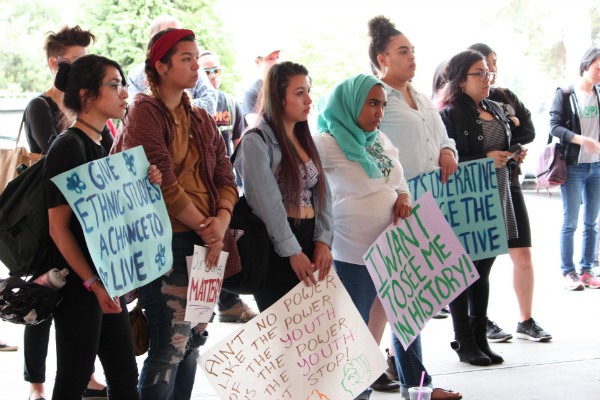 Local history and social studies courses will be getting a makeover thanks to a new policy to develop multicultural education in Portland public high schools.

On May 3, The Portland Public School board voted unanimously to bring ethnic studies to all PPS high schools by 2018. This change is intended to reflect the shifting demographics of the Portland area and to engage youth of color whose stories are often left out of standard history lessons.

The policy is a victory for the Asian Pacific American Network of Oregon Youth Leadership group, which had been advocating for ethnic studies for over a year through their “Missing Pages of Our History” campaign.

The Rev. Joseph Santos-Lyons, executive director for APANO, said these youth leaders were concerned with dropout rates and the achievement gap for communities of color.

“Too many of our students here in Oregon are continuing to drop out before high school,” Santos-Lyons said. “The youth were really thinking about what would help student retention and student achievement.”

The field of ethnic studies challenges the traditional teaching of history and social studies to look beyond White, Eurocentric history. The classes focus on the history of African Americans, Latino, Asian Pacific Islander and Native American peoples as well as the history of immigrant and LGBTQ communities. This teaching practice arose out of the Civil Rights Movement of the late 1960s and early 1970s on college campuses.

In January of this year, Stanford University released a study of the effects of ethnic studies courses on youth at risk of dropping out of high school. The study found that ninth-grade attendance rose 21 percentage points and GPAs rose 1.4 grade points.

The authors concluded that culturally relevant education was a good strategy to reduce dropouts and to engage high school students.

Lillian Gee, a member of the APANO youth organization, ALLY, said her history classes did not reflect her heritage. Gee, who is half-Korean and half-Black, said her Korean culture is never mentioned in class at all and her Black history is looked on as a negative.

“I feel like the history classes focus on a lot of negative things about cultures of color and not things that have uplifted our people and uplifted this country,” Gee said.

Learning history from the traditional lens has felt wrong to Gee. She was angry that figures like Christopher Columbus are treated as heroic adventurers without deeply exploring the racism and genocide in the establishment of the United States.

Four years into the PPS plan, there will be a revision of social studies curriculum and a plan to teach ethnic studies in middle schools.

PPS Superintendent Carole Smith told The Skanner News that the ethnic studies policy was created and guided by the students of the region. These students will continue to be involved through the planning and implementation of the curriculum, she said.

“The board’s vote supporting district-wide ethnic studies was particularly exciting to me because this was a student-led effort,” Smith said. “Our students saw the need for a more consistent and comprehensive ethnic studies program in our high schools, one that is in line with our Racial Educational Equity Policy.”

Santos-Lyons believes this is a victory for youth of color, a step towards a more equitable future and an indictment against the racist climate in the country.

“In this political moment, with such anti-immigrant and racist backlash against people of color across the nation, but also here in Oregon, I think it’s really excellent that young people are leading the way for what the future of Oregon is going to be,” Santos-Lyons said.