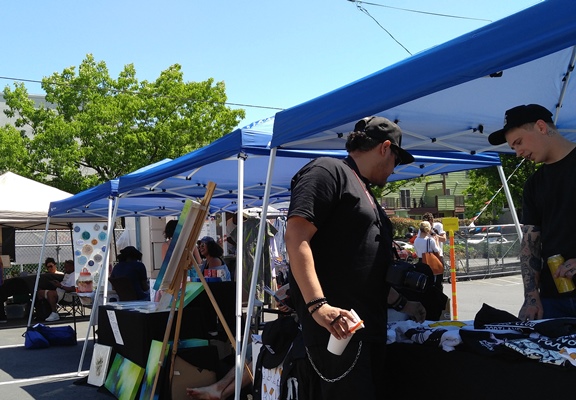 By Christen McCurdy | The Skanner News
Published: 12 May 2016

Last Saturday marked the grand opening of a vendor fair organizers hope will present an alternative to downtown Portland’s famous Saturday Market – one focused on Northeast Portland and minority-owned businesses.

The Northeast Portland Saturday Market is situated on Martin Luther King, Jr. Boulevard in a parking lot north of Prescott on the west side of the street, and runs from noon to 7 p.m. Saturdays.

Sneakers, customized T-shirts, local art and food (including barbecue, soul food, shaved ice and popcorn) were among the offerings at the small vendor fair, which currently has about 25  vendors but is accepting applications for more. The event is the brain child of Mac Smiff (also known as Fahiym Acuay), the editor-in-chief of We Out Here magazine, which covers Portland’s hip-hop scene, and Aaron McConkey, owner of Sneaker Cart, a mobile shoe store.

This past Saturday actually marked the third weekend the vendor fair was open, and Smiff and McConkey hope to keep it going every Saturday this summer. Initially the market opened at 11 a.m., but Smiff said he found larger crowds gathering in the afternoon and shifted the opening time to start later in the day.

“It’s just a cool idea to give people in Northeast on weekends something to do,” McConkey said.

Smiff said most of the vendors at the fair are minority-owned businesses and many have stores or do business in North or Northeast Portland. Others have roots in Northeast Portland and have moved to other parts of the Portland metro area, but enjoy coming back.

“It was almost a chance to come home,” Smiff told The Skanner News.

Table fees run from $20 to $60 depending on the size, but community organizations can distribute information at the event for no charge, McConkey told The Skanner. Those interested in getting involved can get in touch with him through McConkey’s website, sneakercart.com.

“We’re not trying to make money. It’s more about the community,” McConkey said.

Smiff said the market has already attracted some interest, but he hopes to see the event slowly grow over time.

The Northeast Portland Saturday Market has also partnered with the musical collective Twelve Angry Artistry to provide music, with a focus on local artists and producers. Local hip-hop producer Trox curated music for the grand opening, and organizers hope to continue to offer entertainment from a variety of genres at the event.