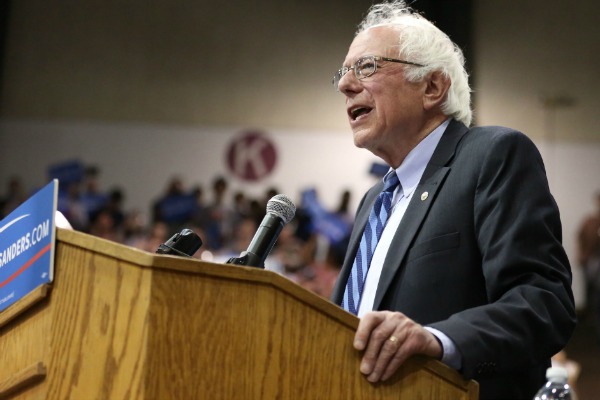 SALEM, Ore.— Forging ahead with momentum from two wins in the past week, Bernie Sanders zeroed in on Oregon's May 17 primary with a rally in the state's capital city of Salem Tuesday evening before about 4,000 devoted supporters.

It marked Sanders' fourth Oregon rally — and the seventh stop by a presidential campaign across the state since March — and this time he arrived to another lively crowd that was enthusiastic over his win in West Virginia earlier that day, which followed another surprise win in Indiana a week prior. In Salem, he roused the crowd by predicting another big win next Tuesday in Oregon, which is self-proclaimed Bernie Sanders country.

"We are in this campaign to win. And we are going to fight for every last vote in Oregon, Kentucky, California, the Dakotas," Sanders said. "Now we fully acknowledge_we are good at arithmetic_that we have an uphill climb ahead of us. But we're used to fighting uphill climbs. We have been fighting uphill from the first day of this campaign when people considered us a fringe candidacy."

Democratic presidential candidate Bernie Sanders speaks to the crowd at a rally in Salem, OR, May 10th, 2016. Photo by Bernie Foster.

Jane O'Meara Sanders arrives with democratic presidential hopeful Bernie Sanders. Sander spoke to a rally in Salem, OR on May 10, 2016. Photo by Bernie Foster.

Bernie Sanders and Jane O'Meara Sanders look over last minute details before the presidential candidate spoke at a rally in Salem, OR, May 10, 2016. Photo by Bernie Foster.

Democractic presidential candidate Bernie Sanders speaks at a rally in Salem, OR, May 10, 2016. Photo by Bernie Foster.

Bernie Sanders boosters hold signs of support during a rally in Salem, OR, on May 10, 2016. Photo by Bernie Foster.

In his speech, Sanders hit Republican presumptive presidential nominee Donald Trump hard from the get-go, saying he must be defeated.

"At the end of the day, love always trumps hatred," he said.

Sanders also said as he's said previously that he is in the best position to defeat Trump in the general election.

Sanders spoke to differences between him and Democratic frontrunner Hillary Clinton, but for only a short time late into his hour-long speech.

Despite trailing almost insurmountably behind Clinton in delegates, Sanders has refused to give up after walking away with the recent wins. He's now looking to Oregon and the nine other remaining Democratic state primaries to help him achieve the near-impossible: a brokered national convention in Philadelphia this summer.

Sanders has won 19 states to Clinton's 23, but she is 94 percent of the way to winning the nomination with just 145 delegates short of the 2,383 required.

That means she could lose all the states left to vote and still become the nominee, as long as her vast support among party insiders known as superdelegates continues. Superdelegates are free to vote as they please at the national convention.

That makes Oregon's 13 democratic superdelegates — a handful of which have already endorsed Clinton —up for grabs next week a drop in the bucket. Still, Oregon has one of the strongest Sanders-leaning electorates of the few states with remaining primaries, which could bode well for him considering the state's 61 bound delegates will be doled out proportionally based on next week's results.

Alfonso Barrera, 34, pledged his unwavering support for Sanders at the rally.

"Some might go vote for Hillary Clinton to try and beat Donald Trump, but I'm still for Bernie," said Barrera, who traveled to the rally from Albany. "It's like, I've been a 49er fan my entire life whether we're winning or losing. I'm a Bernie fan. I like what he stands for."

Bernie Foster, publisher of The Skanner News, also spoke at the event.

“There is change coming,” Foster said. “There is a revolution coming and for the young people here today, I say showing up at a rally is good but it’s not enough. You need to get involved in government. Go to city council meetings and speak up. Run for office, stand up and speak your values. This is what will bring real change in America.”

Sanders also gave a shout-out to Sen. Jeff Merkley of Oregon, the only member of the U.S Senate to endorse him.

Clinton has not yet visited Oregon, but her husband has been in the state twice in recent weeks.

The Skanner News staff contributed to this story.