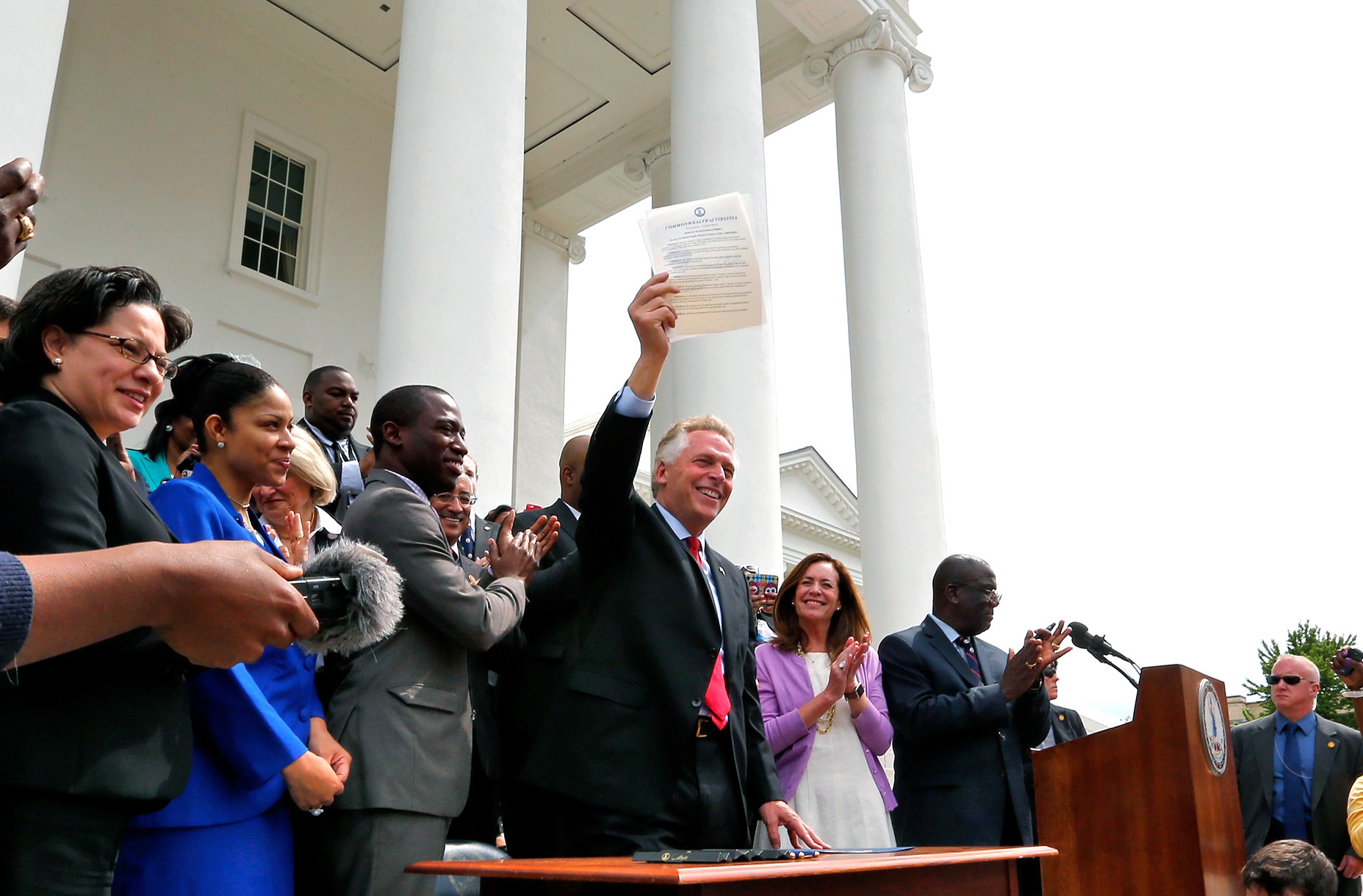 RICHMOND, Va. (AP) — More than 200,000 convicted felons will be able to cast ballots in the swing state of Virginia in November under a sweeping executive order Gov. Terry McAuliffe announced Friday.

The Democrat said restoring their rights to vote and run for office will help undo the state's long history of trying to prevent African-Americans from fully participating in our democracy.

"This is the essence of our democracy and any effort to dilute that fundamental principle diminishes it, folks, for all of us," McAuliffe said on the steps of Virginia's Capitol, before a crowd of more than 100 people.

Many ex-felons were on hand for the announcement, and left-leaning advocacy groups were distributing voter registration cards.

"I am stunned yet not at all surprised by the governor's action," House Speaker William J. Howell said in a statement. "This office has always been a stepping stone to a job in Hillary Clinton's cabinet."

Howell said Republicans are reviewing whether McAuliffe has the legal authority to take Friday's actions. McAuliffe said he is certain he has such authority after consulting with legal and constitutional experts, including Virginia Attorney General Mark Herring.

The governor's order enables every Virginia felon to vote, run for public office, serve on a jury and become a notary public if they have completed their sentence and finished any supervised release, parole or probation requirements as of April 22. The administration estimates this population to include about 206,000 people. Thereafter, the governor will act month by month to restore the rights of felons who complete all these requirements.

The Washington-based Sentencing Project estimates that nearly 6 million Americans are barred from voting because of laws disenfranchising former felons. Virginia, Iowa, Kentucky and Florida are the only states that still remove voting rights for felons for life. Previous governors in other states have granted broad restoration of voting rights in the past decade, but McAuliffe's action is the largest to date, according to the Sentencing Project.

Such policies make black Americans of voting age four times more likely to lose their voting rights than the rest of the adult population, disenfranchising in1 of every 13 African-American adults nationwide. Virginia is among three states where more than one in five black adults have lost their voting rights, according to a recent Sentencing Project report.

There were 5.3 million registered voters in Virginia as of April 1, according to the Virginia State Board of Elections.

McAuliffe, who won election in 2013 by slightly more than 50,000 votes out of more than 2.2 million cast, brushed aside suggestions about political motivations, citing his longtime advocacy for restoring rights.

Before Friday's order, McAuliffe's administration had restored the rights of more than 18,000 felons — more, they said, than the past seven governors combined. Former Gov. Bob McDonnell, McAuliffe's immediate predecessor, was also a strong advocate for restoring rights.