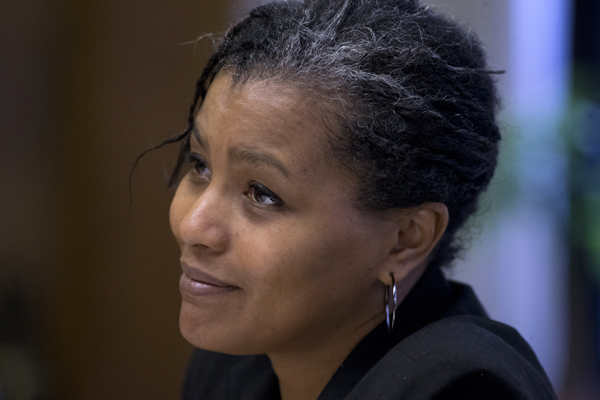 UPDATE: On Thursday afternoon, April 21, the jury determined that Raiford was not guilty of disorderly conduct. This was reported by The Oregonian and BlueOregon.

Black Lives Matter protestors, Portland Police Bureau officers, lawyers and members of the local activist community converged at the Multnomah County courthouse Monday morning for the trial of Teressa Raiford. Supporters filled Judge Michael Greenlick’s courtroom to capacity and overflowed into the halls for the trial, which was still in progress at press time.

Raiford faces one charge of second-degree disorderly conduct stemming from her involvement in a protest that marked the one-year anniversary of Michael Brown’s death. Brown died August 9, 2014 in Ferguson, Missouri after being shot by Darren Wilson, a White police officer.

In an interview with The Skanner News, Raiford said she was arrested specifically because of her Black Lives Matter activism.

“They wanted to show us, definitely, August 9 was not anything anybody could be honoring or celebrating,” she said. “We have cops out here that had ‘I am Darren Wilson’ badges on during the protest after the verdicts -- so you think they really wanted us to honor Mike Brown's death?”

She described the protest as a well-coordinated event. She said the group had a permit to protest that day and a permit from the fire marshal, as well as permission to use the Asian Pacific Alliance Network Organization community center for direct action training.

The group of 100 protestors stopped traffic at 82nd Avenue and SE Division Street for four-and-a-half minutes to remember the four-and-a half- hours that Brown’s body lay in the street after he was shot. The group then moved to the southwest corner of the intersection where they began chanting and drumming, Raiford said.

A video shows most of the protestors had moved onto the sidewalk, but Raiford was in the street when she was arrested. Another protestor, Diane Chavez, was also arrested for second-degree disorderly conduct.

Both Raiford and Chavez told The Skanner News that Raiford received harsher treatment from the arresting officers. They were both handcuffed in the back of separate police vehicles. An officer offered to park the car Chavez was in in the shade while Raiford was in a car parked in the August afternoon sun with the windows rolled up.

When Raiford was moved into the police car with Chavez, she said she was “soaking wet” with sweat. Chavez said the officers then closed Raiford’s window.

“My experience being arrested with her was that they were explicitly trying to degrade her and dehumanize her,” Chavez said. During booking at the downtown precinct, Chavez said Raiford was yelled at while the officers treated Chavez well, calling her “ma’am” and thanking her for participating peacefully.

During the pretrial motions Raiford’s lawyer, Matthew McHenry, argued to have the case dismissed. He stated that the state's statute which defines disorderly conduct as an “attempt to cause public inconvenience, annoyance and intention to obstruct traffic” was too vague.

McHenry also presented an amicus brief from the ACLU of Oregon which explained legal research on Raiford’s case. The brief outlined the legal history of disorderly conduct statutes, and concluded that these laws were meant to prevent threats to the public peace--not to policing protected speech such as protests.

McHenry and prosecuting attorney Eamon McMahon then argued the most fundamental point of the arrest -- was Raiford actually blocking traffic and did the officers have probable cause to arrest her?

Portland police Sgt. Jacob Clark and officer Susan Billard both testified that Raiford’s arrest was not due to the four-and-half minutes blocking the intersection. Clark said he ordered the arrest after telling the protestors three times to stay on the sidewalk.

“I said if people were standing in the street, they were likely to be arrested,” Clark told the court.

Clark said he could not recall if any cars had been blocked by Raiford. Billard testified that she saw at least five cars that were stopped and had to wait at least two minutes before being able to drive past. Billard also said the protest took place during a busy Monday afternoon, but  after cross-examination she corrected her account, saying it happened on a Sunday.

Billard’s testimony was contradicted by a video of the protest shot by Laura Vanderlyn. The 22-minute video shows the action to block the intersection and then the chanting along Division. Raiford can be seen both on the sidewalk and walking in a right turn lane.

Judge Greenlick watched most of the film, paying attention to the shots where Raiford was walking in the street to see if she was blocking traffic. After viewing the video, Greenlick said Billard’s testimony was not credible and did not support probable cause to arrest Raiford.

Despite this issue, the trial was not dismissed, and is scheduled to continue for three or four days. If convicted, Raiford faces a maximum of six months in jail.