Pier Park skatepark is the hot spot for Northeast Portland's youth this summer. On any given afternoon you can find a hundred or so kids "oohing" and "ahing" at the daredevil skaters showcasing their skills. Glenhaven skatepark in Southeast Portland is just as hot, with crowds turning out each day to marvel at the free performances.
For several decades now, skateboarding, rollerblading, and BMX riding have been gaining popularity in Oregon and across the country. With their half-pipes, slopes and ledges, skateparks are specialized building projects that have to take into account the terrain and dimensions of each location.
The three existing municipal skateparks each host hundreds of skaters including a growing number of ethnic minority skaters.
Joe Mobley, an African American skater, frequently visits all the Portland skateparks.
"I have been skating for most of my 19 years, I have love for the sport; we're all athletes out here."
The city of Portland plans to maintain a skate park in each city quadrant, and across the state, 19 skate spots and skate parks are targeted for construction. Matthew Grumm, staff assistant to Commissioner Dan Saltzman, said public demand is behind the boom in skatepark construction.
"All of this would have not been possible really with the help of Skaters for Portland SkateParks and The Skatepark Leadership Advisory Team, who really put in the time to push the idea and get feedback from the different communities," he said.
Saltzman has been a part of the skatepark boom, promoting plans to create Ed Benedict and Gabriel skateparks, projects which will cost the city $1.3 million. Companies such as Nike and Vans have also contributed to the projects.
The new parks, currently under construction, will be among the largest municipal skateparks, ranging from 8,000 to 10,000 square feet. They will offer roller skaters, skateboarders — and eventually BMX riders — a controlled terrain designed for riding and skateboarding.
"It is a great idea, as you can get 100 skaters at a time at the park versus 12 basketball players on a court at a time," Grumm says.
From its beginnings in Southern California, where a group of young mostly White, surfer boys began skating in empty swimming pools, skating has evolved into a sport for people of all ages and colors. Companies are developing products specially for skate fans — from Heelys, shoes with built-in wheels, to trick scooters.
Music and movies most recently brought the skate world onto center stage. Rapper T.I. exposed the culture of skating at the skating rinks in the movie "ATL." Producer and artist Pharrell, or Skate Boi P, as he calls himself, created the Ice Cream skateboard team. Now a new group has emerged, calling themselves DipSkate. 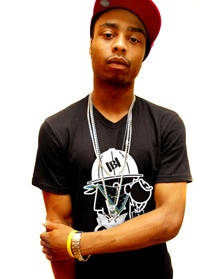 DipSkate formed about a year ago, the brainchild of  Diplomat records co-CEO Jim Jones and professional inline skaters Calvin Sayles and Ramelle Knight. The group, which  combines music, fashion and trick skating call themselves "freestyle rollers," or "aggressive skaters."
Chief rollerblader, Knight, a 23-year-old New York City native, who has been skating for seven years, is one of DipSkate's stars.
"DipSkate brought about the freestyle rollerblading movement," he said. "I've been doing this before the movies and the music, I first picked it up for the fitness of it all, but it doesn't bother me that the music is drawing the attention. It's just like a new pair of sneakers — people want them cause its new and in."
Knight and DipSkate have become icons in the world of freestyle rolling. On his Deshi blades, he makes flying over ramps, railings and other props look easy.
Knight said skaters are attracted to the camaraderie of the sport. "Ultimately skating is a culture, and a big family, you know, " he said.
This week the Rose Quarter will showcase top skaters, BMX riders and snowboarders as the AST Dew Tour arrives in Portland. The tour will run from Thursday through Sunday.