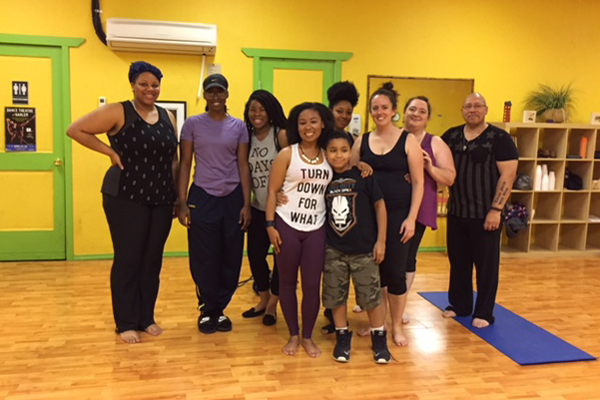 Cazoshay Ward was driving around Anchorage, Alaska, listening to a hip-hop track by Andy Mineo, when she had an idea.

Ward saw yoga sequences unfold as Mineo dropped a beat and she knew she wanted to infuse yoga with hip hop.

Ward brings this vision to Portland through her community hip hop yoga classes. The first in the series takes place at 6:30 p.m. April 19 in the Taborspace community center. More than 50 people have signed up for the class on Facebook and another 245 indicated they are interested in going.

This class will blend together the Hatha practice of holding poses and the Vinyasa style, which transitions between yoga positions. The movements and breathing exercises are set to an upbeat hip hop soundtrack.

Ward said this class is part of her mission to bring healthy practices and community support to people who don’t feel comfortable in regular exercise venues.

“It's really my goal to make yoga and wellness accessible to people that haven't tried yoga before,” she said.

Ward has long been devoted to health access and wellness regardless of race or wealth. In 2007 she was a goodwill ambassador to the Republic of The Gambia after representing Alaska in the Miss Black USA Scholarship Pageant. Part of her work was to bring donations of medical and school supplies to hospitals and schools.

She said the ambassadorship was an amazing experience where she was inspired by people who supported each other despite having little money. This gave Ward a passion for service. She often volunteers to teach yoga at events such as the International Center for Traditional Childbearing's 2015 Black Midwives and Healers Conference.

The community hip-hop yoga class at Taborspace is offered at $10 per session. Ward said it was important to price the class to be accessible to many. She herself is a single mother who is raising a nine-year-old son and knows that a healthy lifestyle can be expensive.

“I definitely understand that not everyone has that extra income to invest in their health and wellness,” Ward said.

In the United States, most of the people who teach and practice yoga are predominantly White. A 2002 National Health Interview Survey found that 85 percent of yoga practitioners were White. In October 2015, a Seattle People of Color Yoga class was shut down after receiving death threats.

Ward, an African American woman, said she is comfortable working in this typically White space. Instead of looking at racial and cultural differences, she believes that hip-hop can bring people together and bridge these gaps.

Yoga is widely recognized as a way to reduce stress levels – which are disproportionately high in African Americans. According to the U.S. Department of Minority Health, African Americans are 20 percent more likely to report having serious psychological distress than Whites, but half as likely to receive anti-depressant treatment.

Poverty levels intensify these numbers: Black people living in poverty are three times as likely to report distress compared to those living with wealth above the poverty line.

A 2015 Public Library of Science study correlated geographic area levels of racism with higher death rates. The study found that a greater proportion of racist Google searches, indicating more intense racist attitudes, was associated with an 8.2 percent rate increase for all causes of death in Black people.

In addition to hip-hop, the class’ soundtrack includes neo-soul tunes like “Doo Wop (That Thing)” from the 1998 album “The Miseducation of Lauryn Hill.” Ward said she likes to mix songs with positive messages together with songs that are fun like Rihanna’s “Work” and tracks from Drake.

She is also hoping to feature the work of local Portland rappers, hip-hop, soul or R&B artists during the classes. Interested musicians are encouraged to email her at cazoshay@divineinterventiondesign.com.

As Ward establishes her independent business in Portland, she hopes the hip-hop yoga class continues to expand and grow. Already there are plans to start a class in Tigard. She believes this fusion of hip-hop and yoga should flourish beyond the region to become a national movement to connect communities to health.