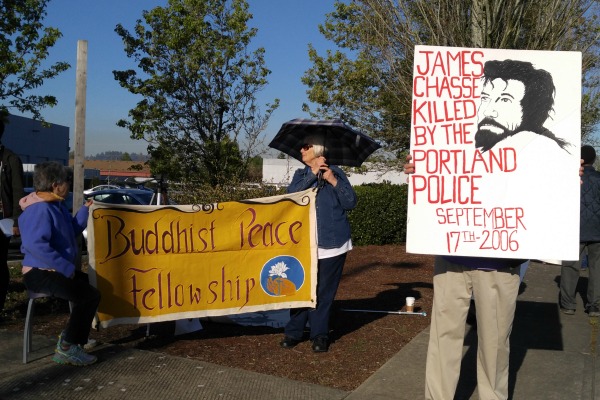 The golden morning sun was still low on the horizon as protestors gathered in front of the Portland Police Training facility on Airport Way. Cars quickly sped by, while commercial freight trucks honked their horns in support.

The protestors held signs calling for accountability of police where people have died in their custody.  Keaton Otis, James Chasse, Kendra James and Aaron Campbell names were written on their banners.

The group gathered on April 1 to protest what they thought was a bad joke: the use of public police resources to hold an exclusive $ 1,000-per-person fundraiser called Meet the Heat.

“One of my big problems with this event is that it is for an elite class of people with the goal of schmoozing them, so that they become advocates for more policing,” said Jo Ann Hardesty, president of the Portland NAACP and the organizer of the protest.

The demonstrators were a small mixed gathering of police accountability activists, peace advocates and retirees. Present were community media outlets including The Skanner News, KBOO and Street Roots. As the Meet the Heat event began, the parking lot filled with silver and slate colored late model BMWs, Mercedes Benzes and Corvettes.

Jo Ann Hardesty meets with Assistant Chief Kevin Modica outside the Meet the Heat fundraiser. Hardesty organized a protest of the exclusive $1000 per person event. Photo by Arashi Young.

Welcome sign for Meet the Heat. Protestors entered the lobby but were not able to gain access to the event. Photo by Arashi Young.

The Meet the Heat event from behind the glass doors in the lobby. Protestors asked to gain access to the event, but were denied the opportunity. Photo by Arashi Young.

Wiley G. Barnett holds up a sign protesting the merging of moneyed interests with police force. Photo by Arashi Young.

A protestor holds up a sign against the militarization of the police. Photo by Arashi Young.

A protestor holds a sign asking for justice for Keaton Otis who was killed in 2010 during a traffic stop. Photo by Arashi Young.

A protestor holds a sign objecting to police sweeps of the homeless. Photo by Arashi Young.

Protestors gather to demonstrate against Meet the Heat, a $1000 per head fundraiser for the Portland Police Foundation. Photo by Arashi Young.

Protestors hold a banner for the Buddhist Peace Fellowship and others hold signs remembering those who died in police custody such as James Chasse. Photo by Arashi Young.

Protestors gather to demonstrate against Meet the Heat, a $1000 per head fundraiser for the Portland Police Foundation. Photo by Arashi Young.

Meet the Heat was advertised as an exclusive VIP invitation-only event to demonstrate emergency vehicle maneuvers, weapons such as firearms and tasers and defensive tactics. Fliers advertised the event as a “unique, hands-on experience.”

Meet the Heat was presented by the Portland Police Foundation and the Citizens Crime Commission, a non-profit organization affiliated with the Portland Business Alliance.

Kathryn Kendall from the Buddhist Peace Fellowship protested the event because she believed the event glorified violence and discounted the real life effects of policing.

“People paid $1,000 to come and play with violent toys as if police were a movie, as if it was an action show and it’s not. It’s real lives. People are dying,” Kendall said.

Kendall would rather see a fundraiser for restorative justice or more efforts to reach out to people with mental illness and those who are homeless.

Former Black Panther and social justice activist, Wiley G. Barnett, said the Meet the Heat event runs counter to the recommendations of the Department of Justice settlement. The 2014 settlement detailed a pattern of excessive force against people with mental illness.

“The result was the agreement between the department of justice and the city of Portland was that the police would learn to train and carry out disengagement practices, de-escalation practices, mediation practices,” he said.

Barnett said the fundraiser merges corporate money with police enforcement which will ultimately oppress the poor. At the demonstration, he carried a sign that read “Corporate Power + Police Power = Fascism.”

Former Portland Police Chief Mike Reese, who is now the Interim Executive Director of the Citizens Crime Commission, spoke with The Skanner News about Meet the Heat. He said the event was created to bring about more community involvement by raising money for the Portland Police Bureau Community Academy.

Reese said the event is nearly identical to academies where community members meet with police and learn about police tools and training. There hasn’t been an academy for the last two years due to budget and staffing shortages.

Reese describes these meetings as “transformative events” where leaders, ministers and members of the media leave with a better understanding of policing and police officers.

“They all have spoken very highly about how it really was an opportunity to meet and talk to police officers about their training, about the challenges they face,” Reese said.

An hour into the rally, the group moved to the front of the training facility where Hardesty read a press statement denouncing the event. She said Meet the Heat glorified police violence and worked against the police culture reforms proposed in the DOJ settlement.

She railed against a private, exclusive event that takes place on public property during public business hours using public employees. She said it used tax dollars, but doesn’t benefit the community as a whole, only a select, rich, few.

Hardesty then brought the protest to the lobby of the training center to ask for access, but the group was barred from entering the facility. Assistant Chief Kevin Modica came into the lobby to meet with Hardesty and the protestors.

After a brief conversation, Hardesty restated her objection to the event and then asked the protesters peacefully disperse. As the group was leaving, Modica affirmed the right to protest.

“I appreciate all of you,” Modica said. “You know, one of the best things about America is that you can express yourself in ways that are appropriate and not be suppressed.”