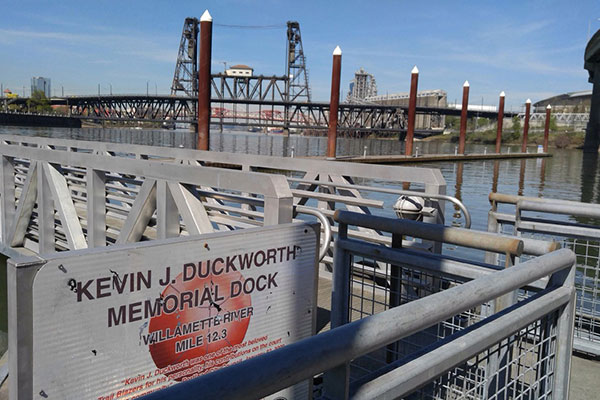 The Oregon State Marine Board decided Tuesday to tow the Kevin Duckworth Memorial Dock away from downtown Portland and relocate it to Swan Island for use by Daimler Corp. employees and Overlook neighborhood residents.

Now located at the Moda Center, the dock was christened in honor of the beloved Portland Trail Blazer who passed away in 2009.

All agree it’s never been used for its intended purpose. City ofﬁcials thought yacht owners would tie up vessels there to go to games at Memorial Coliseum or perhaps fish off the side.

That's never happened, because there's never been security, fishing is prohibited there and also because experts agree the wave action can damage yachts.
Meanwhile, Daimler Corp., with its U.S. headquarters in Portland and new $150 million manufacturing plant at Swan Island, is moving to create a nice outdoor amenity to make its employees happy after paying out record ﬁnes for racial and other discrimination claims.

But as more and more people are enjoying swimming in the river, the issue of towing the dock to Swan Island and giving it over to the multi-national truck manufacturer is causing ripples.

In part that's because there are so few docks or river access points near the downtown core, and the one place where swimmers have been able to hang out -- the Holman Dock south of the Hawthorne Bridge -- is going to be towed away for the rest of the summer while the sediment underneath is capped against pollution.

Public testimony taken by the Oregon State Marine Board in February showed that yacht owners and other river fans support keeping at least part of the dock where it is, in anticipation of future use for swimmers and non-motorized boaters.

Daimler supporters argue that towing the dock to Swan Island won’t necessarily mean more people use it but that it will be closer to an emerging green space and hiking trail in North Portland.

Part of the problem is that the dock is owned and operated by the Portland Bureau of Transportation -- which is upfront about not wanting to manage a river amenity. PBOT wants Portland Parks & Recreation to run it.

At a public hearing in February on the proposal by Daimler to take over the dock, Daimler employees talked about what a nice addition the million-dollar structure would be to their corporate campus.

Testimony by Andy Jansky, an engineer with Flowing Solutions who helped design the Eastbank Esplanade and now is working for Daimler, showed how planning went awry with the dock from the time of its construction almost 20 years ago.

"It went through a really long period of not a lot of attention because the people we did it for don't specialize in docks, they specialize in streets," he said.

At the February hearing, Gabriel Dowding of the Sauvie Island Yacht Club supported keeping at least part of the dock at the Eastbank Esplanade. "We have sailboats, so getting under the bridge presents one trouble and putting our boats up against that dock will represent the tremendous potential for damage because of the speed of the boats that go by," she said. "However there aren't very many docks left in Portland that are publicdocks. So just because we may not bring our yachts in I hear, ‘It's under utilized, it's underutilized,’ but that is not to say that it is not utilized,” she said.

Mayor Charlie Hales’ staff member Jillian Detweiler, who said she attended the February meeting to keep tabs on public sentiment about the move, expressed surprise that officials had not explicitly investigated whether or not more people would actually use it if it were moved.

“Is there an objective information about -- we heard in both locations that they are not good to dock your boat because passing traffic creates too much of a wake?” Detweiler said. “Has Daimler or Andy (Jansky) or anybody studied whether or not the new location is actually enough out of the flow that one would want to dock their boat there?”

“I’m not aware of any studies that have been done regarding that,” responded Oregon State Marine Board director Scott Brewen.