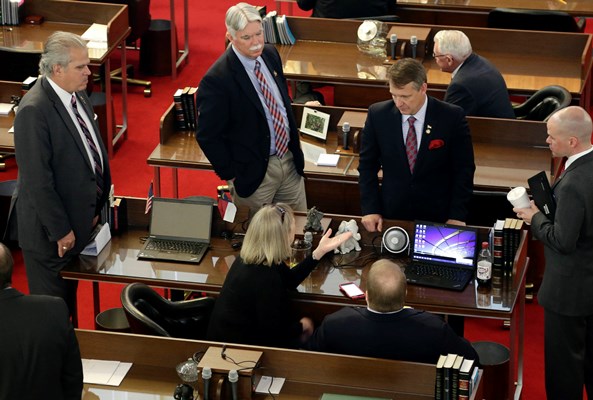 American Airlines, which operates its second-largest hub in Charlotte; the biotech company Biogen, which manufactures pharmaceuticals in Research Triangle Park; and payments processor PayPal, which last week announced plans to hire 400 people in Charlotte, were among the corporations condemning the new law.

"We believe no individual should be discriminated against because of gender identity or sexual orientation," American Airlines spokeswoman Katie Cody said. "Laws that allow such discrimination go against our fundamental belief of equality and are bad for the economies of the state in which they are enacted."

The impact on North Carolina jobs will take time to quantify, but Democrats warned that North Carolina risks losing billions in federal education dollars by conflicting with Title IX anti-discrimination regulations that apply in public schools.

The NCAA, which is scheduled to hold men's basketball tournament games in Greensboro in 2017 and Charlotte in 2018, also said it's monitoring the situation and takes diversity into account when it chooses its event sites.

"Our commitment to the fair treatment of all individuals, regardless of sexual orientation or gender identity, has not changed and is at the core of our NCAA values. It is our expectation that all people will be welcomed and treated with respect in cities that host our NCAA championships and events," the organization's statement said.

Supporters of the law signed by Republican Gov. Pat McCrory Wednesday night say it protects all people from having to share bathrooms with people who make them feel unsafe. Advocates for gay, lesbian, bisexual and transgender rights call the law a "devastating" setback that they may try to challenge in court.

Determined to undo a Charlotte ordinance that would have protected transgender people who use restrooms aligned with their gender identity, the North Carolina legislature convened a special session to produce the new law, which prevents all cities and counties in the state from passing their own anti-discrimination rules.

The new law also prohibits local governments from requiring businesses to pay workers more than the state's minimum wage, currently set at $7.25 an hour. McCrory had sought a bill dealing exclusively with bathrooms, but signed it anyway.

Critics of the Charlotte ordinance, which would have taken effect in North Carolina's largest city on April 1, focused on its language involving transgender people and restrooms.

McCrory, who was the mayor of Charlotte for 14 years, said the new law was "passed by a bipartisan majority to stop this breach of basic privacy and etiquette."

Republicans and their allies said they had to protect the safety of women and children, arguing that any man — perhaps even a sex offender — could enter a woman's restroom or locker room simply by calling himself transgender.

"It's common sense — biological men should not be in women's showers, locker rooms and bathrooms," said GOP Rep. Dean Arp of Monroe before the House voted 82-26 in favor. Although 12 House Democrats joined all Republicans present in voting for the bill, all Senate Democrats walked out in protest, leaving Republicans to voice unanimous approval.

"We choose not to participate in this farce," Senate Minority Leader Dan Blue of Raleigh said.

Charlotte Mayor Jennifer Roberts, who pressed for the anti-discrimination ordinance, said in a statement that the General Assembly "is on the wrong side of history."

McCrory countered that Roberts and the city council had overreached into "the most personal of settings."

Ordinance supporters and opponents spoke to legislators in House and Senate committees.

Everyone deserves to be treated with dignity and respect, Donna Eaton of Cary told lawmakers, but she worried that Charlotte's ordinance would "open the door for people with malicious intent who would masquerade as transgenders to come in and actually take advantage and have access to our kids."

Skye Thompson, 15, a transgender boy from Greenville, told senators that requiring him to use a woman's restroom puts his life in danger: "I've dealt with bullying my whole life and now I worry that my own state lawmakers are bullying me as well. I feel bullied by you guys," Thompson said.

Bathroom use has proved to be a potent wedge issue for opponents of gay rights protections around the country since Houston's anti-discrimination law was overwhelmingly voted down in a referendum last year, but LGBT advocates have had some victories, too. South Dakota's legislature failed to override Gov. Dennis Daugaard's veto of a bill requiring students to use bathrooms corresponding to their birth gender, and a similar bill in Tennessee bill died Tuesday.